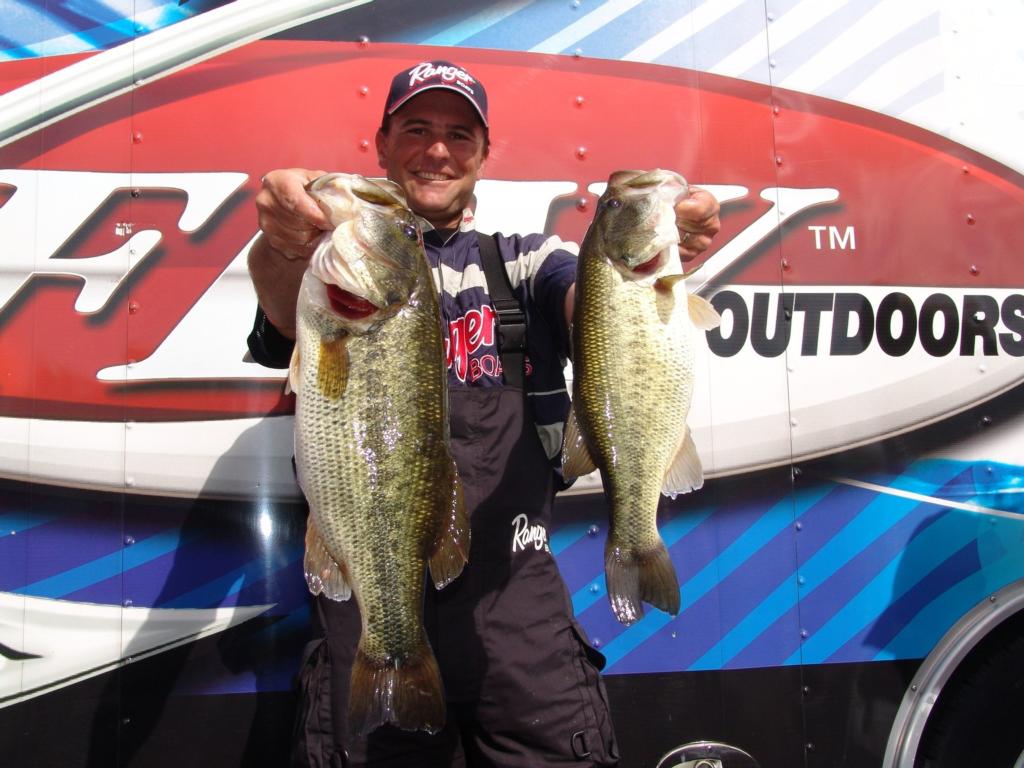 Persistence paid off for California pro Rob Riehl who improved from fourth place to first with another big limit. Photo by David A. Brown.
March 13, 2008 • David A. Brown • Uncategorized

OAKLEY, Calif. – After an eye-popping day-one weigh in, the fertile California Delta showed its fickle tendencies by changing the script on day two of the Wal-Mart FLW Series National Guard Western Division tournament in Oakley, Calif.

It was far from a complete blow-off, but with a light morning rain giving way to sunshine and windy conditions, this big-bass haven changed the script for several anglers. Some fared well; others not so good. Chad Frie, the Livermore, Calif., pro who led day one with a 35-pound, 10-ounce limit – largest in FLW Series history – caught only two fish for 6-10 and stumbled to 28th place. Similarly, Roseville, Calif., pro Chris Raza finished fifth on day one with 29-10, but fell to 50th when he weighed just 9 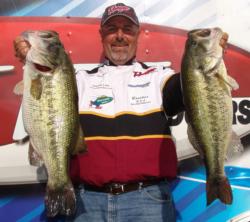 Conversely, John Harper of Sunol, Calif., rocketed from a day-one finish of 176th to 58th on the strength of his 30-pound, 6-ounce day-two limit. Elsewhere, David Kromm of Kennewick, Wash., bagged the day’s other 30-pound stringer (30-4) and bettered his day-one position of 168th to 47th.

Despite this jostling, some of the top finishers from day one fared as well or better in their second day of competition. Tracy, Calif., pro Rob Riehl moved up three spots to take over the lead with a 22-7 limit that gave him a 53-8 total. 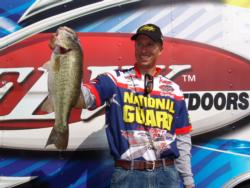 Working black-and-blue creature baits slowly in about 6 feet of water, Riehl’s strategy leveraged the numbers game. “I’m just getting a lot of bites, and I figure I’m getting 30, 40 or even 50 bites a day; chances are that with the amount of big fish in this body of water, I’ll get a couple.”

Hitting about 15 spots on day two, Riehl said he focused on working each one slowly and methodically: “I pretty much caught fish all day, but the tide was pretty decent this morning. The bite picked up this morning, plus the rain helped. Once the sun came out and the tide came up, I struggled for a while. But when the tide started going back out, it picked up again.”

Confidence in his spots proved essential to Riehl’s success. He said: “I might go through a spot five times, leave and then come back, because I know the fish are there and then get bit. I got my biggest fish today on a spot that I went to yesterday and never got bit. I went there first thing this morning and never got bit; I went there at 11 o’clock and got that big fish.”

Past Cup champion climbs to second

Brent Ehrler of Redlands, Calif., gained a notch to second place with a 52-1 total. He started his day flipping, but when the wind impeded his presentations, he started beating the banks in 2 to 6 feet with crankbaits.

“I just started running around, and I was fortunate to get a few bites here and there,” Ehrler said. “It wasn’t anything great, but the wind blew, and I really couldn’t do anything else.”

In third place, Phoenix pro Brett Hite continues to feed off the momentum he gained by winning the 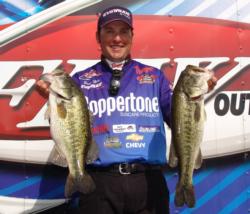 Fishing the south delta regions, Hite said he worked long stretches of canals in about 6 to 10 feet: “I’m throwing all reaction baits and mixing it up with crankbaits, spinnerbaits and (vibrating jigs). I was just going down the bank, chucking and winding.”

Louis Fernandes of Santa Maria, Calif., placed fourth with 50-2, and Andre Moore of Alabaster, Ala., was fifth with 49-5.

In the Snickers Big Bass competition, Brett Davies of Davis, Calif., reached into his sack and hauled out 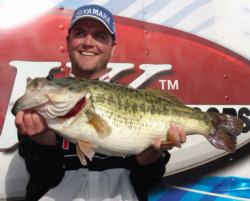 a bucketmouth beast weighing 13 pounds, 11 ounces. The leviathan largemouth hit a 7-inch watermelon-red-flake Senko in 7 feet of water over a grass line near tules.

Davies recalls the moment: “Fishing was pretty slow, and I hadn’t gotten bit in a while. I was trying to keep my spirits up because it was pretty discouraging out there, so once I got this fish in the boat, it was rejuvenating.”

Taking the co-angler lead, Robert Jones of Clayton, Calif., added 23-6 to his day-one score of 20-1 and moved up four places with a 43-7 total. His second-day limit included an 11-9 that gave him a run for his 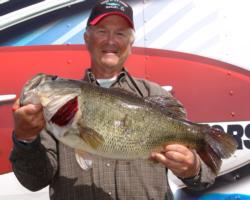 Drop-shotting a Roboworm near the tules, Jones suddenly found himself wrestling a serious fish on spinning tackle and monofilament. “It was a long fight. I was lucky the big fish went for deep water, and all I had to do was keep it from breaking off on the boat.”

Fishing the central delta region, Jones caught his big fish around noon in 4 feet of water.

Jim Sall of Pasco, Wash., finished second with 37-6, while Robert Faaborg of Ramona, Calif., placed third with 37 pounds. Robert Castner of Chino, Calif., took fourth with 36-3, and Greig Sniffen of Saratoga, Calif., was fifth with 36-23. 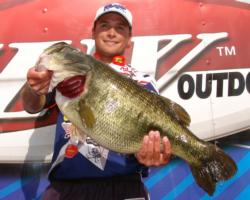 Also besting a huge fish was National Guard co-angler Justin Lucas of Folsom, Calif., who won the big-bass award with his 13-pound, 9-ounce behemoth. Lucas’ fish bit a 6-inch triple-margarita-colored Berkley finesse worm on a drop-shot rig – on his last cast of the day.

“My partner (Jeff Billings of Clearlake, Calif.) was saying, `Dude, we have to go,’ but I said, `Just one more cast,'” Lucas said. “So I cast up into the tules and got a bite. I set the hook, and the fish takes off 20 to 30 feet immediately.”

Lucas used his moment of glory to pay tribute to a special group of individuals: “I dedicate that fish to all the National Guard people overseas. I wouldn’t be here today if it weren’t for them, so that fish is for them.”

Rounding out the top 10 co-angler leaders at the FLW Series Cal Delta event: