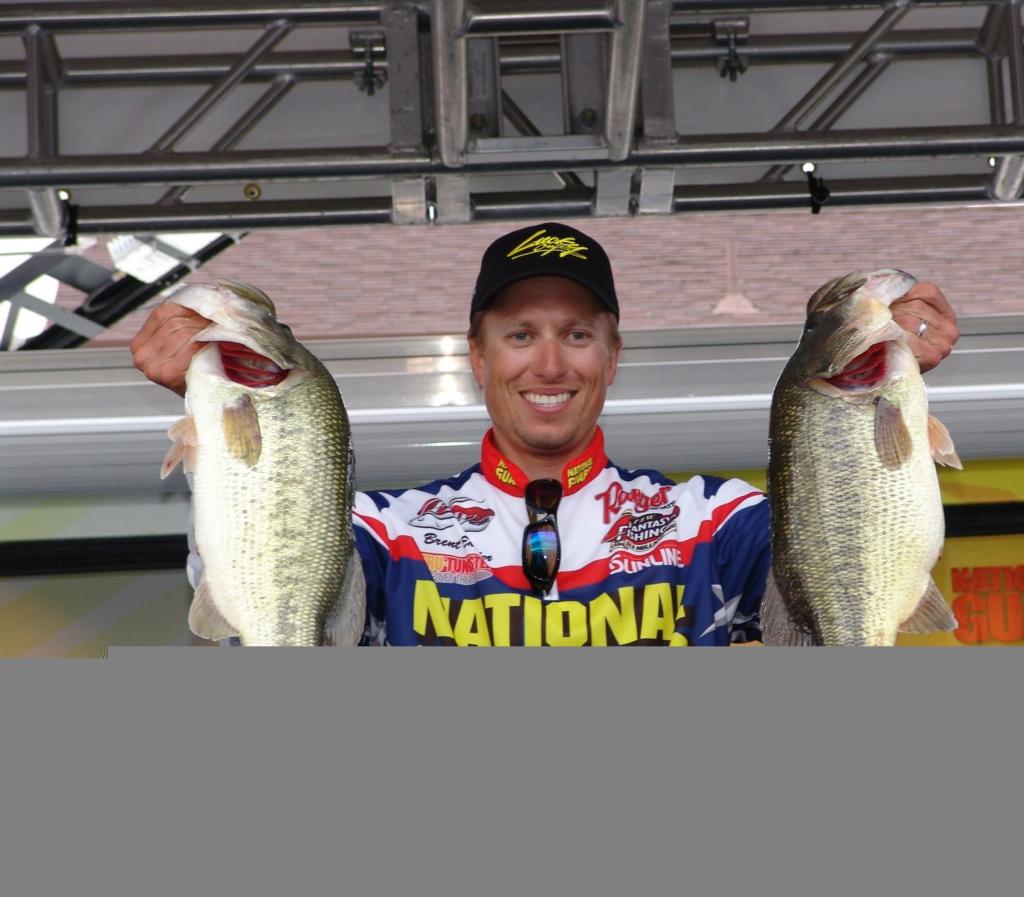 OAKLEY, Calif. – After scratching out a limit on day two of the Wal-Mart FLW Series National Guard Western Division event on the California Delta, Brent Ehrler had a dim outlook for day three. Twenty-four hours later, sitting atop the leader board, his perspective had changed dramatically.

Hailing from Redlands, Calif., Ehrler said: “I really wasn’t too confident going into today. I stumbled a little bit and only caught about six or seven bass. But things just went right for me today. I caught one good one early and then got my limit. That gave me confidence knowing that I have decent check and I have a chance (at making the top-10 cut).

Adding his second limit of 30-plus pounds – this one 31-10 – Ehrler pushed his 3-day total to 83-11. When he couldn’t catch the fish he needed by flipping, he turned to crankbaits and caught 17 pounds by 11 a.m. Tides, Ehrler said, played a critical role in his success.

“I had a late (flight) today, so I could fish that low tide in the afternoon, which was crucial for me. All through practice, I didn’t really feel like I had a specific tide that I caught them on, but after the last few days of the tournament, I realized that the lower tide was better for me.”

Although anglers are fishing in a mostly freshwater environment, daily tidal fluctuations within San Francisco Bay cause delta waters to rise and fall. High water scatters the fish across prime shorelines, but when the outgoing cycle commences, the fish know that they must feed aggressively before low tide pulls them into deeper channels and drop-offs.

With tide schedules moving about an hour later every day, the hot bite on the outgoing tide has been coming later in the afternoon. Ehrler said he hopes this doesn’t stymie his success.

“I might get lucky and catch a couple of big ones (on high water), but I think the better ones are biting on 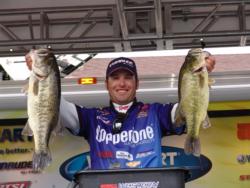 low tide,” he said. “I’m just hoping that a couple of them will get stupid and I can catch them when the tide is high.”

Continuing his march up the leader board, Phoenix, Ariz. Pro Brett Hite caught 28 pounds on day three to lock up a second place spot in Saturday’s top-10 finale with 79 pounds, 2 ounces. Fishing Senkos and chatterbaits along a quiet canal off the main waterway, Hite struck pay dirt early.

“By 11 o’clock, I had 22 pounds, so I just went prefishing (for Saturday) along some different stretches that I haven’t fished and I ended up catching a 6-pounder. It’s been working out really good.”

Hite said the best part about his spot is solitude. “There’s nobody fishing around me. I have a lot of confidence in where I’m fishing. I’m catching quite a few fish and they’re all good ones, so I’m excited about tomorrow.” 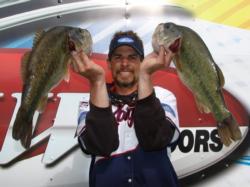 Moving into third place with a total of 72 pounds, 10 ounces, Louis Fernandes of Santa Maria, Calif., caught 22-8 in what began as a challenging day.

“I had to run and gun,” Fernandes said. “I didn’t catch a fish for the first two hours. The head games really (set in), so sat down in the boat took a little breather. I went to a couple of spots where I’d caught some fish in practice and got my limit.”

Fernandes caught his fish on jigs, spinnerbaits and crankbaits. His bites came between 10 a.m. and 1 p.m.

Proving that you can never count out the tenured local pros, 71-year-old Dee Thomas of Brentwood, 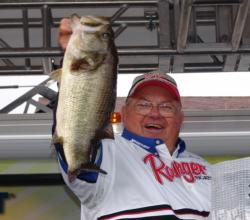 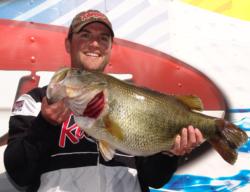 Davis, Calif. pro Brett Davies wowed the weigh-in crowd on day two when he hoisted a hulking bass that weighed 13 pounds, 11 ounces. A day later, he really rocked the house by claiming his second consecutive Snickers Big Bass award with another enormous fish, this one weighing 12-7.

Davies caught his second whopper on a watermelon red flake Senko. Incredibly, Davies caught the second monster less than a football field from the sight of his day two accomplishment.

Unlike the 13-pounder, which just tapped the bait and came to the boat fairly quickly, the day two fish acted like it was having a bad hair day. “Yesterday, the big fish pulled a couple of times and we got it in the net pretty quickly. Today, it was a fight. That thing went out to deep water and it was taking me all over the place.”

Continuing the big fish theme, Sean Stafford or Fairfield, Calif. more than made up for a pair of light 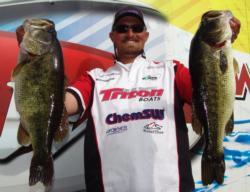 catches with a record limit on day three. After weighing 11-7 and 8-3 on days one and two, Stafford nailed an exclamation point to his tournament performance by bagging a third day limit of 35 pounds, 12 ounces – the heaviest stringer ever weighed in an FLW Series event.

Rounding out the top-10 pro leaders at the FLW Series Cal Delta event: