Hite gets the bite 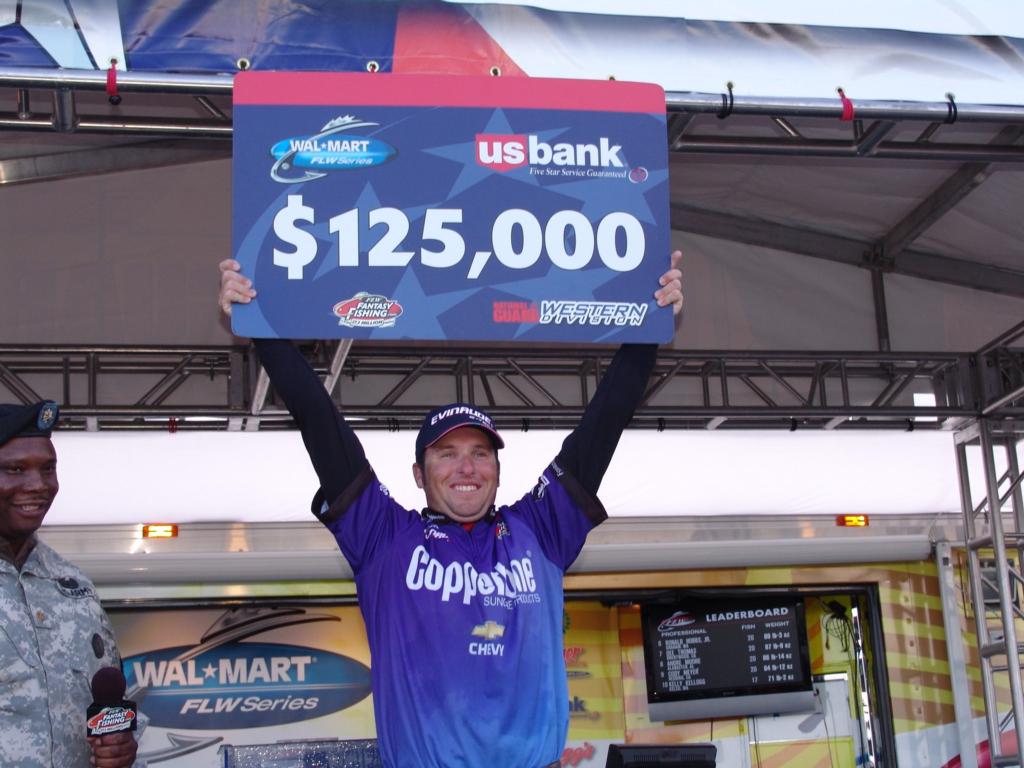 OAKLEY, Calif. – No need for fancy intros – Brett Hite is on fire. Two weeks after winning the Wal-Mart FLW tour event on Lake Toho, the Coppertone pro from Phoenix grabbed his second consecutive victory Saturday, this one at the Wal-Mart FLW Series event on the California Delta.

Winning two major events in a career is more than the majority of folks will ever claim. Two in a season merits the “amazing” badge. Back-to-back? Well, most will see Bigfoot before experiencing that little fantasy.

Starting his National Guard Western Division campaign on the Delta by placing sixth on day one, Hite improved to third on day two and made the 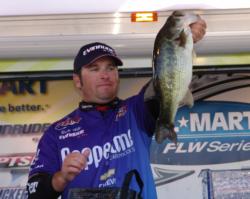 Hite’s phenomenal feat earned him a $125,000 payday and the top spot in the Land O’Lakes Angler of the Year points race. On the intangible side, the win solidified what Hite described as a self-perpetuating can-do attitude.

“When you have confidence in what you’re doing, you don’t second-guess yourself,” he said. “You just go out and do what you need to do.” 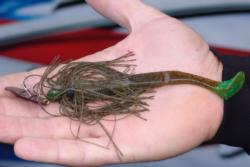 With prespawn migrations pushing thousands of big bass into the shallows, Hite found a productive pattern and rode that pony of productivity across four days of competition. In a long canal off the south Delta’s main waterway, he found a tule berm sporting shallow grass and lots of potential. Making long drifts and meticulously picking apart the habitat comprised his simple, yet effective pattern.

“I’ve been on the fish all week, and there hasn’t been anybody fishing around me,” Hite said. “I would start at one end and let the wind blow me all the way to the other end. I’m chucking and winding the whole time. Every day I was getting 15 to 20 bites, and at least 10 of them were good ones.” 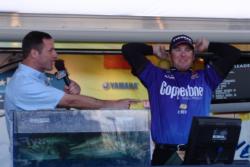 Hite caught his fish on a 3/8-ounce Phenix vibrating jig with a black blade and a green-pumpkin Swimming Senko. “The (vibrating jig) is great for fishing shallow grass. It’s like throwing a Rat-L-Trap that doesn’t get hung up. I like the green-pumpkin color because it looks like a bluegill, and I think bass eat bluegill anywhere you go.”

Hite said he used the same bait, rod, reel and technique that he used during his win at Toho.

Ehrler eases back to second

Having led the pro field with 83-11 going into Saturday’s final round, National Guard pro Brent Ehrler found a decent limit weighing 18-6, but ended up second overall with 102 pounds, 1 ounce. 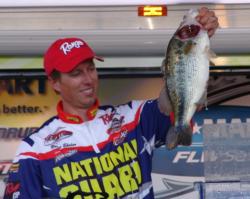 Throughout the week, he had found his best action on outgoing tides, when falling water reduced shoreline access and prompted bass to feed aggressively.

The tide rose through the morning, went slack around midday and then started falling in the early afternoon. Unfortunately, the day’s 3 p.m. check-in left Ehrler with practically no time to fish his preferred stage. Adjusting to deeper water, he threw crankbaits and scratched up whatever bites he could find.

“I just had to keep my head down and keep casting and cranking,” Ehrler said.

Partial to red crawdad patterns, Ehrler resorted to modifying lighter crankbaits by coloring his own crustacean patterns with permanent markers.

Despite coming up short, Ehrler said he was pleased to have topped his personal best stringer twice during the tournament. Previously, he had never broken the 27-pound mark, but Ehrler sacked 31-4 on day one and 31-10 on day three.

A former FLW Tour and Stren Series championship winner, Ehrler summarized his keys to success: “It’s a lot of hard work and a lot of practice. I get out there and fish from dark to dark every day.

Louis Fernandes of Santa Maria, Calif., reached the final round in third place with 72 pounds, 10 ounces. He bagged a solid 27-pound limit, but finished in the same spot. 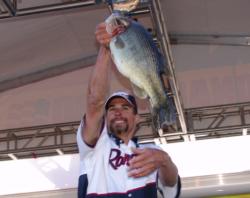 When jigging failed to produce as it had earlier in the week, Fernandes turned to a red Luhr Jensen Speed Trap. He caught his best fish in 2 to 3 feet of water over rocks. Most of his day was slow and discouraging, but Fernandes said he was able to capitalize on a brief window of outgoing-tide opportunity before leaving for check-in.

“I had one little rock pile where I caught a 6-pounder every day of the tournament,” Fernandes said. “I fished it like five times today, but I knew they’d be there on the outgoing tide.

Entering the final round in eighth place, Ken Wick of Star, Idaho, found a limit of bass weighing 24 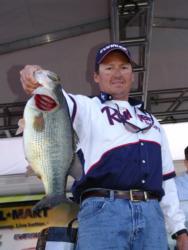 pounds, 6 ounces and moved up four notches to finish fourth with 93-2. Fishing crankbaits in 4 to 8 feet, Wick followed an aggressive strategy aimed at maximum exposure.

“I’ve been covering a lot of water all day, every day,” Wick said. “I haven’t been afraid to try new (areas). I had my trolling motor on (high), and I was burning those baits.

When fishing slowed down during slack tide, Wick was able to tempt a few fish into biting by casting into the grass and ripping his bait out of the vegetation.

Randy McAbee Jr. of Bakersfield, Calif., entered the final round in fifth place and ended in the same 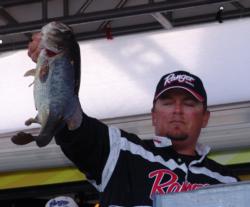 position. McAbee also fished a Speed Trap and caught a limit of bass weighing 18-12 for a total of 89-6.

“I caught a few little fish early on the incoming, but then on that slack tide, I was pretty much dead. I just started burning banks and caught a few fish here and there.

“During the last 10 minutes of the tournament, that tide turned around and I made 13 casts and caught 12 fish. They were all 3-pounders.”