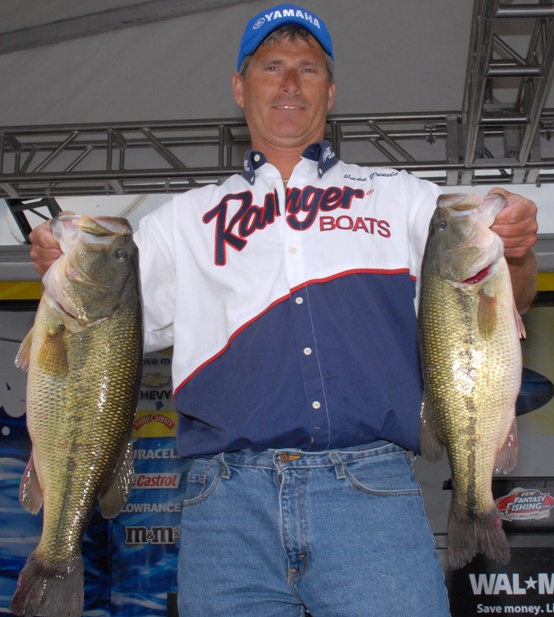 DECATUR, Ala. – If you happen to know someone fishing the Wal-Mart FLW Series BP Series Eastern on Wheeler Lake this week, you might want to overnight them a few more of their favorite bass lures soon.

Simply put, Wheeler bass are eating the plastic and paint off every lure they can find.

Pros were not kidding when they casually mentioned that fishing was “pretty good” on Wheeler this week.

Consider that in the Pro Division today 164 out of 184 pros caught five-bass limits, and a solid 14-pound bag of bass barely put a pro in the top 20.

What’s even crazier is pros caught bass from depths of 20 feet to 20 inches and everywhere in between on everything from jigs to jerkbaits.

Indeed, March madness is in full swing on Wheeler Lake.

Leading the way after day one is FLW Series rookie Jake Deeds of El Dorado, Ark., who brought in five bass for 18 pounds, 3 ounces.

Deeds’ large limit was boosted by the Snickers Big Bass in the Pro Division weighing in at 7 pounds, 10 ounces.

“Everyone who knows me in South Arkansas knows I’m a jig fisherman, and that’s how I’m catching them here, fishing jigs deep,” Deeds said. “I’m fishing about 15 feet of water for prespawn fish.”

Deeds noted that he had a phenomenal practice where he averaged 30 bites per day. Today, however, the number of bites fell off to 15 and he boated nine keepers.

“I’m pleased with my catch, but I really thought I was going to catch a lot more fish,” he said. “I don’t know why I got so many fewer bites today. But I’m not going to change anything tomorrow; I think what I’m doing is going to hold and keep producing fish.”

Just 3 ounces off the lead is Bryan Thrift of Shelby, N.C., with five bass for 18 pounds. 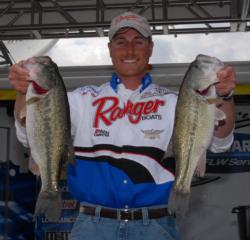 Compared to the leader, Thrift is fishing the opposite end of the water column in depths from “3 inches out to 2 feet” with a 1/2-ounce Berkley Frenzy Rattler.

He estimates he caught between 20 and 25 bass today.

“I’d much rather be flipping docks with a jig this time of year, but I couldn’t make that work in practice,” Thrift said. “I started targeting shallow clay flats with that Frenzy Rattler and found some pretty good fish.

“I’m fishing so shallow it’s hard to keep my bait from digging in the mud, so I’m using a 7-foot Fenwick Techna AV rod with 17-pound-test Berkley fluorocarbon and holding the rod up high in the air when I reel to keep the lure from bogging down in the dirt.”

Despite fishing shallow, Thrift does not seem too concerned about fluctuating water ruining his pattern.

“I actually caught them better when the water was lower in practice,” he said. “The dropping water had them pulled out to more predictable places. With the water up, the fish have spread out more; if it falls, it might actually help me.” 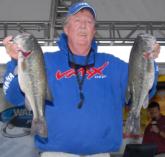 Back to the deeper side of things, Tim McDonald of Lexington, Ky., holds down third place with 17 pounds, 13 ounces.

“These fish were actually much shallower four or five days ago, but that cooler weather backed them off a good bit,” he said. “If it continues to warm up, they’re subject to shoot right back up there on the bank, so I’ve got my work cut out for me in terms of keeping up with their movements from day to day.”

Jim Dillard of West Monroe, La., is in fourth place with 17 pounds, 12 ounces. 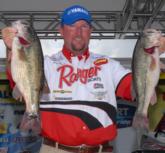 Dillard played the odds with both a shallow and deep game plan today.

He started on deeper ledges with a shaky head to secure a fast limit before venturing up into shallow mud flats and scoring a couple of bonus big bites on a Hog Hunter Shaky Jig.

“It’s a ChatterBait-style lure,” Dillard said of the Shaky Jig. “It’s got a big hook in it to keep fish pinned. I’m fishing it Louisiana style, up there shallow in the mud.”

Keith Combs of Del Rio, Texas, rounds out the top five after day one with five bass for 17 pounds, 9 ounces.

Combs is targeting prespawn fish relating to ledges that drop from about 2 feet to 5 feet.

“I can see the places they want to go bed on, but they have not made that final move yet,” Combs said. “They’re staying out on the first primary drop, waiting to move up. I’m cranking the ledges with a moving bait; I probably caught about 30 keepers that way today.”

Rounding out the top 10 pros in the FLW Series on Wheeler Lake after day one: 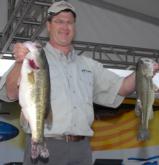 on Wheeler after day one with a five-bass limit weighing 15 pounds, 8 ounces.

Chelminiak had a co-angler’s dream day thanks in large part to his pro partner, Dion Hibdon.

“Fishing with Dion was a blast,” Chelminiak said. “When they call him an ambassador of the sport, I now know what they mean – he’s a true classy guy.”

Chelminiak dragged jigs behind Hibdon for the bulk of his catch, which included a 6 1/2-pound bass.

“I caught my last bass just before weigh-in,” he added. “My three biggest fish came on a ¾-ounce jig out in about 14 feet of water.”

Co-angler Beecher Strunk of Somerset, Ky., is in second place with 14 pounds, 3 ounces thanks to a 6 1/2-pound kicker, which bit a crankbait.

Masayuki Matsushita of Aichi, Japan, is in fourth place with 13 pounds, 12 ounces.

James Falciani of Decatur, Ala., and David Harrison of Huntsville, Ala., round out the top five with a tie at 12 pounds, 1 ounce.

Jason Seaton of Martinsville, Ind., caught the big bass in the Co-angler Division on day one weighing 7 pounds, 10 ounces.

Rounding out the top 10 co-anglers in the FLW Series on Wheeler Lake after day one: