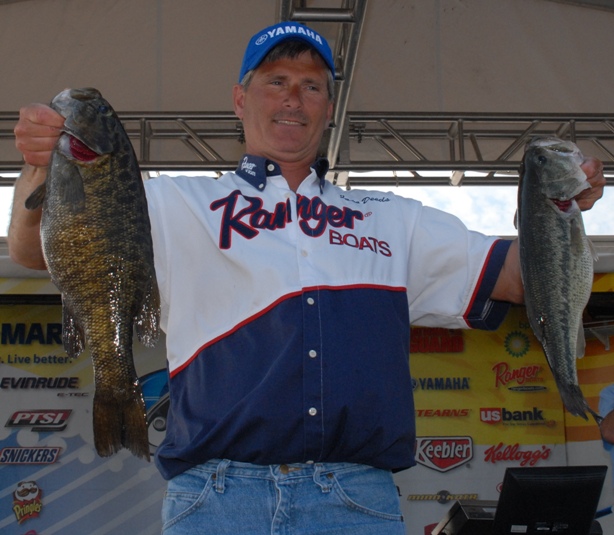 DECATUR, Ala. – A gusty 20-mph wind lightened livewells just a tad on day two of Wal-Mart FLW Series BP Eastern competition on Wheeler Lake. But overall, the five-bass limits kept pouring in across the weigh-in stage.

The top-10 cut now stands at 26 pounds, 12 ounces in the Pro Division, and consistency is starting to pay off for those who can maintain a 12- to 13-pound-per-day pace.

Still leading by 7 ounces is Jake Deeds of El Dorado, Ark., with a two-day total of 32 pounds, 9 ounces.

The Arkansas rookie, who is fishing the FLW Series and Wal-Mart FLW Tour for the first time as a pro this season, went back to his jig-dragging plan today. He got more bites like he wanted, but his weight went down a bit.

“I got more bites today, but they wouldn’t hold on to it,” Deeds recounted. “They’d just bite it and drop it; I think they’re getting a little spookier because of the boat traffic. There are other boats fishing down the same banks I’m fishing, but they are up tighter to the bank on top of the fish I’m fishing for; they’re fishing the bank, and I’m casting to where their boats are positioned. I’d have to think all that trolling-motor noise is starting to mess with the fish some.”

Deeds is fishing a 1/2-ounce football jig made by Pepper Jigs, teamed with a NetBait Paca Craw, in large rocks down to 15 feet.

“I usually prefer the Jewell football jigs, but I’ve lost all the ones I brought with me in the rocks,” he said. “Losing jigs is just part of the way I’m fishing. I’ve found replacement jigs at a local tackle store – the Pepper Jigs – and they seem to be working fine. But I’ve lost a bunch of those too.”

Deeds noted that he is not necessarily swimming the jig, but he’s not exactly dragging it either.

“I call it `floating’ the jig,” Deeds described. “I’m kind of floating it just off the bottom over the rocks. I am contacting rock occasionally, but it’s not like I’m dragging slow over every nook and cranny.”

“The wind blowing on the banks definitely helps,” he added. “I think it helps camouflage the boat traffic somewhat. A big cloud came over today and it got dark and windy there for a while, and that’s when they bit the best.”

As for changes or adjustments tomorrow, Deeds says he plans to change nothing.

Weighing in one of the heaviest limits of the tournament was Lonnie Oneal of Valdosta,

“The water came up enough last night to allow me to get into a place that I couldn’t get into yesterday,” Oneal said. “It’s the back of a shallow pocket, and it’s got a bunch of isolated stumps in there that I found in practice. The fish are around those stumps, and I’m catching them on a big 10-inch Bass Assassin worm, fished slowly around the stumps. I had my best five fish in about 30 minutes in there this morning.”

But the shallow-water pocket is not the only fish Oneal has going. He caught 13 pounds, 5 ounces yesterday, fishing an open-water pattern.

“As long as the water stays up and lets me get into my best spot from today, that’s where I’m going,” he added. “I feel like there are plenty of fish in there, and the big females are staging around those stumps. But if I can’t get in there, I’ll just go out deep to my backup stuff I fished yesterday.” 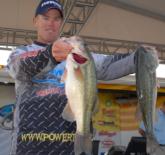 Keith Combs of Del Rio, Texas, improved his standing by two places to grab third by bringing in 12 pounds, 12 ounces today for a two-day total of 32 pounds, 2 ounces.

Combs continues to work small, shallow ledges in 2 to 5 feet of water with a reaction bait for his catch.

Though he did not want to reveal the exact bait yet, Combs said it’s definitely a reaction bite based on speed.

“I’ve tried flipping and fishing slow in there, and they just don’t bite that way,” Combs said. “It’s a 100-percent reaction bite. I cast up there, burn the bait out hard, and when I contact something with it, that’s when they bite.”

Combs is primarily working one stretch, back and forth, most of the day.

Jim Dillard of West Monroe, La., held on to his fourth-place spot from day one with an 11-pound,

The bulk of Dillard’s weight is coming from one deeper-water area where he is fishing shaky heads down to about 10 feet. Once he secures a limit, he goes shallow to cull up, but he did not get a big bite shallow today.

“I stayed on my deeper spot a little longer today to help my co-angler get some fish (Derrick Snavely, who now leads the Co-angler Division thanks to Dillard’s patience),” Dillard said. “At about 1 o’clock, I finally went shallow, but it didn’t pay off like it did yesterday.”

Brad Hallman of Norman, Okla., jumped from 24th to fifth today with the help of a 15-pound limit for a two-day total of 28 pounds, 7 ounces.

“I’m fishing spawning coves real slow, trying to catch some of the first females that are moving into these areas to spawn,” Hallman said. “This lake is all about the big bite, and I’m staying in areas where I feel like the best potential for that exists. I lost a couple of big ones yesterday, but I got a big one to the boat today, and that was the difference for me from yesterday to today.”

Rounding out the top 10 pros in the FLW Series event on Wheeler Lake after day two:

Derrick Snavely of Rogersville, Tenn., now leads the Co-angler Division of the FLW

Series on Wheeler Lake with a two-day total of 22 pounds, 15 ounces.

“Jim is an awesome guy to fish with,” Snavely said. “He really knows what he is doing out there. Several times today he held the boat in position for me in that wind and let me cast while he didn’t fish. He definitely helped put me in the lead.”

Rick Barham of Southaven, Miss., brought in 12 pounds, 7 ounces today to move into second place with a two-day total of 21 pounds, 1 ounce.

Chuck Thurlow of Auburn, Ala., is in third place with a two-day total of 20 pounds, 13 ounces.

Rodney Chmolack of Phenix City, Ala., is in fourth place with a two-day total of 20 pounds, 12 ounces.

Bill Niesciur of Glenn Carbon, Ill., holds down the fifth position with a two-day total of 20 pounds, 7 ounces.

Rounding out the top 10 co-anglers in the FLW Series on Wheeler Lake after day two: