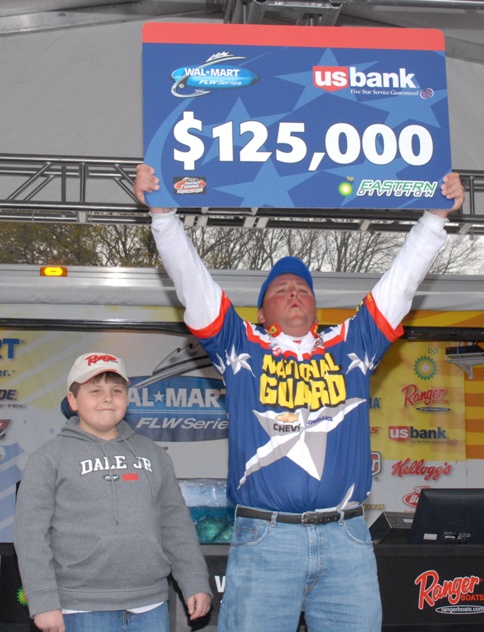 DECATUR, Ala. – Those who do not believe that bass tournament weigh-ins can be exciting should probably tune in to FSN (Fox Sports Net) on Sunday, May 4, at 11 a.m. EDT to watch the Wal-Mart FLW Series BP Eastern event from Wheeler Lake, easily one of the most emotionally charged weigh-ins the FLW Series has ever conducted.

In the end, a teary-eyed Ramie Colson Jr. of Cadiz, Ky., clung to his first FLW Series career victory by a single ounce.

The dramatic roller-coaster of a weigh-in actually began when Oklahoma’s Brad Hallman stunned the crowd with a 19-pound, 5-ounce catch – easily the biggest limit of the entire tournament – to jump from seventh place firmly into the lead.

Then Colson, who started day four in second, approached the scales with his fish.

Tournament Director Chris Jones announced that Colson needed 17-1 to tie and 17-2 to take the lead. After Colson placed his final keeper in the tank, his weight came to 17 pounds, 2 ounces, beating out Hallman by an ounce.

Colson then delivered a particularly moving and personal story about taking his 10-year-old son, 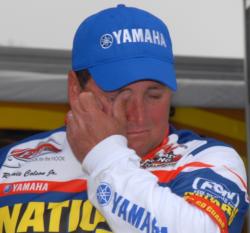 Douglas, to the family’s preacher over Easter weekend to privately discuss the meaning of Easter, where Colson and his son shared some special time together.

That experience brought perspective to Colson’s fishing week, and the memory brought tears to Colson’s eyes onstage, tears which continued when he was handed the winner’s trophy and $125,000 cash.

“It was a very special week in my life even before I got here,” Colson said. “I want to thank God and my family for that.”

From the beginning of practice, Colson never figured he was on the fish to win the Wheeler event.

“At best, I figured I could catch 8, 9, maybe 10 pounds per day,” he recalled. “The biggest fish I caught in practice was a 3-pounder – that was it. So I had no reason to believe that this (win) could happen.”

But as Colson’s tournament week developed, the fish in his primary area in First Creek began to grow. 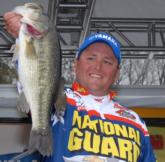 “Today, when I caught my second-biggest bass, was the first time I thought I might actually have enough weight to win one of these,” he said. “But then I listened to Brad weigh in that 19-pound stringer, and I knew I was done for; I was going to finish second because I figured I had about 16 pounds.

“When Chris took his hand off the scale and the display read 17-2, I couldn’t believe it. Seeing that number on the screen is something I’ll never forget.”

Colson’s trip to victory lane was no cakewalk. As many anglers noted during the week, First Creek, located on Wheeler’s lower end, was one of the most popular spots on the lake for FLW Series pros.

“At any given time, there were 20 to 30 boats in there,” Colson said. “But what I noticed was that a majority of them were fishing shaky heads, and the ones that were throwing jigs were fishing pretty fast.”

With that in mind, Colson began to creep his 5/16-ounce War Eagle Heavy Cover Finesse jig along the bottom. The jig was teamed with a Zoom Superchunk Jr. (green-pumpkin/purple) and tied to 15-pound-test Berkley 100% fluorocarbon line. He fished the jig on a G-Loomis 7-foot medium-heavy rod. 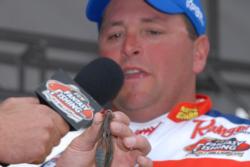 “To make myself slow down, I sat back in my seat and pulled that jig over every rock I could feel, occasionally hopping it just slightly,” he said. “Mentally, I just blocked out all the other boats around me.”

In time, Colson learned that with a large degree of patience, he could outfish the shaky-headers and bank burners with a slow, methodical approach. 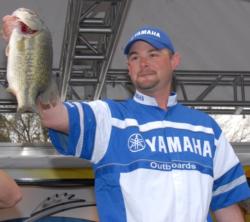 In the runner-up position by just an ounce, Brad Hallman of Norman, Okla., settled for second with a four-day total of 59 pounds, 2 ounces worth $45,292.

Though Hallman had a dream day four and weighed in the glory limit of 19-5 when it counted the most, it was a culling error on day one that will likely haunt him for some time.

Hallman was using numbered buoys to cull his fish. And at the time he thought that “#4” was his smallest fish, so he culled the fish on the #4 buoy several times up to 2 1/2 pounds. But when he got to weigh-in, he discovered – to his horror – that buoy #3 still held a puny 12-inch keeper.

“That cost me the tournament, no doubt,” Hallman lamented. “It’s one thing to have them come off before they get to the boat, but to have the winning fish in your possession – about a 2 1/2-pounder – and then release it because you think it’s your smallest fish is altogether a different matter.

“But I’m not going to dwell on the negative,” Hallman recanted. “I’m glad Ramie won it. I had a good week here, and I had an awesome day today. In fact, I had some things happen today that really made up for some of my misfortunes earlier in the week. I got a couple of key fish in the boat that were tangled up in cables behind boat docks. So to come in here today, weigh in the biggest limit of the tournament and finish second is still satisfying.”

All week, Hallman relied on a Berkley Power finesse worm fished on a shaky head and a 5/16-ounce Eakins jig teamed with a Zoom Speed Craw.

Hallman was skipping his lures to the back of marina docks, located in a backwater area about 35 miles upriver from the launch site.

Dan Morehead of Paducah, Ky., finished third with a four-day total of 56 pounds, 9 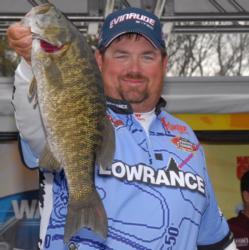 He fished the lower end of the lake around the dam the first two days and then moved back near the launch site the last two days.

“I was mainly targeting rock shelves out in about 3 to 5 feet of water,” Morehead said. “Earlier in the week, they were out deeper off the rock ledges, but as the week went on, they seemed to have moved right up on the shelves.

“I’d cast to the bank, drag that jig out until I felt rock and then just shake it,” he added. “Today was just incredible. I probably caught over 50 keepers.” 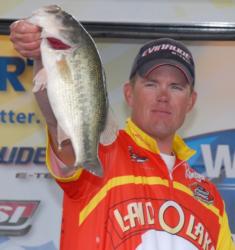 When compared to other patterns in the top five, Combs was the odd man out, relying solely on crankbaits instead of jigs to catch his fish.

His two primary crankbaits were a Strike King Series 3 and a Lucky Craft RC 1.5.

He fished the two crankbaits along riprap ledges in a marina near the launch site.

“The biggest key for me was getting that reaction bite,” he said. “I could not make those fish hit jigs and worms like the other guys. They wanted that crankbait when it deflected off something.”

In order to enhance the deflection properties of his crankbaits, he fished them on light lines of 8- and 10-pound-test Trilene monofilament.

“The deflection was everything to my pattern,” he added. “And light line is critical for achieving a really hard deflection. Heavier lines prevent the bait from fully glancing off cover properly.”

Rounding out the top five was Andy Morgan of Dayton, Tenn., with a four-day total of 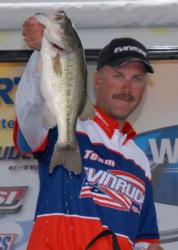 “Day two was really my survival day,” Morgan said. “That day my jig bite died and I had to resort to cranking flats in the Elk River with a Mimic crankbait and a Strike King Redeye Shad. Other than that, everything else pretty much came on the jig.”

Rounding out the top 10 pros in the FLW Series Eastern on Wheeler Lake:

The next Wal-Mart FLW Series BP Eastern event will be held Sept. 10-13 on Lake Champlain in Plattsburgh, N.Y.