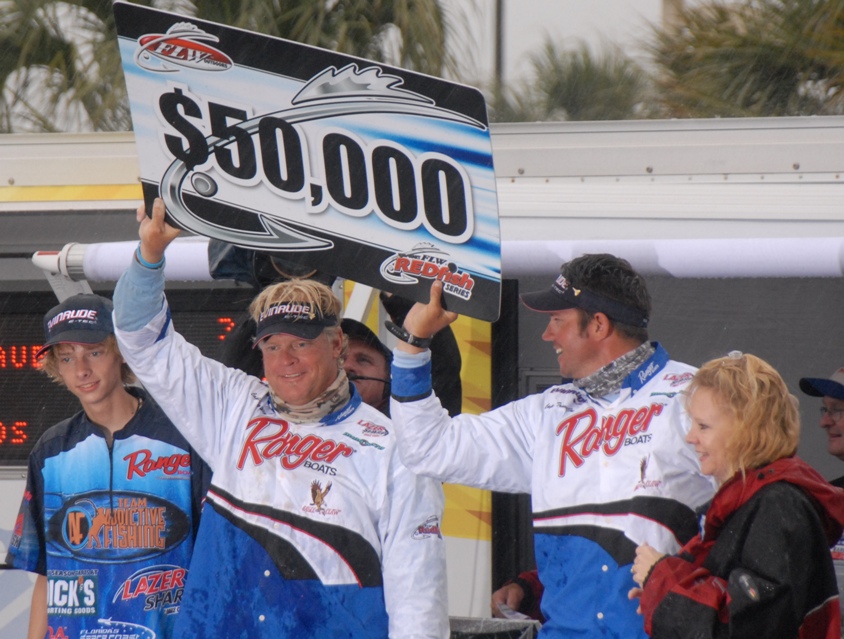 PANAMA CITY BEACH, Fla. – If the bigger one had just bit…If the wind had not changed that last day…If that one fish had not been just over 27 inches.

In professional redfishing winning weights are usually so close that the “what if’s” normally pour out on stage of the final day of a Redfish Series weigh-in as redfish teams miss the winning mark by ounces.

However, there were few “what if’s” muttered at the final weigh-in of the FLW Redfish Series in Panama City Beach this afternoon.

That’s because Blair Wiggins of Cocoa, Fla., and Travis Tanner of Titusville, Fla., dominated the event from start to finish. When the final-day weigh-in scales came to a close with Wiggins and Tanner’s fish, the team had amassed a three-day total of 45 pounds, 4 ounces to take a commanding win by 3 pounds, 14 ounces.

That now stands as the largest margin of victory in a Redfish Series Eastern Division event.

Despite the gloomy downpour that doused the weigh-in ceremonies, Wiggins and Tanner’s smiles could probably be seen beaming out into the Gulf of Mexico from the Wal-Mart parking lot in Panama City Beach.

“What an awesome week,” said a rain-soaked Wiggins. “I’ve had this same rush only twice in my life: once when I got to fly an F-15 jet for 45 minutes when I was in the Air Force, second when Tadd and I won the FLW Series Championship in 2006.”

All week long, Wiggins talked in disbelief about the size of the redfish school he and 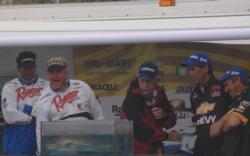 Tanner fished for the win.

And while it would be easy to say that the school alone gave the team victory, there were other teams that found the same school. Yet, each of the first two days, Wiggins and Tanner were able to pull the biggest slot fish from the school.

“We fished for the biggest fish in the school that we could see,” Wiggins explained. “It really boiled down to a game of keep away from the smaller fish. At times we would speed reel our D.O.A. Bait Buster over the top of the water to keep the little ones from eating it. But when a big one flashed up there to get it, we’d drop it down and let it eat.”

Wiggins also credits his dedication of time during practice for the win. He scouted the Panhandle coastline for two weeks prior to tournament time.

During that time he found several schools of reds but the biggest one was located some 60 miles to the east of Panama City. And even after he found the school, his work was not done.

“I spent several hours a day just watching this school,” Wiggins said. “As the tide came up the school would move in. But the best time to catch them was when the tide started to go out. That’s when the fish would fracture off into smaller packs and use certain gulleys and potholes to migrate back off the flat.”

Wiggins acknowledged that the fish were very aggressive. He did not have to resort to any finesse tactics and instead hunted them down with a D.O.A Bait Buster tied to 65-pound braid on his signature edition Wright and McGill rod, which is 8-feet in length.

For the win, the team took home $50,000 including contingencies. 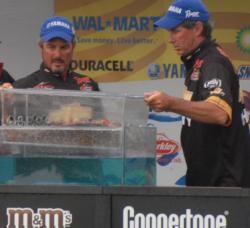 The Florida-Texas duo ran nearly 80 miles to the east each day to catch their fish.

“We couldn’t see the schools as good today because of the clouds,” Vandemark said. “And we still had an awesome day of fishing – we probably caught 50 fish.”

“We knew Blair was pretty much uncatchable so we were fighting for second place and that’s where we ended up,” Vandemark said. “It was an unbelievable week of fishing – like a dream. And my former teammate won so I can’t complain.”

Terry Segraves of Kissimmee, Fla., and Bill Edwards of Pembroke, Ga., caught the 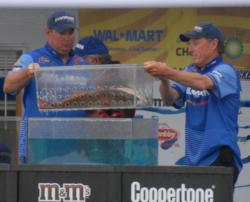 biggest stringer of day three weighing 14 pounds, 9 ounces to move into third place with a three-day total of 41 pounds, 1 ounce worth $4,987.

Segraves and Edwards located a large school of reds in East Bay during practice and did not realize how many fish they were on until today when they caught all they could catch – an estimated 100 redfish.

“This has been the most incredible fishing day in my life,” Edwards said. “I bet we caught 100 reds. Terry and I doubled up 24 times in a row.”

Edwards fished the school all week but was extra cautious in catching only what he needed each day and then guarding the school for the next day.

As far as lures, Edwards said a ¾-ounce gold spoon was all that was needed to catch the schoolers. 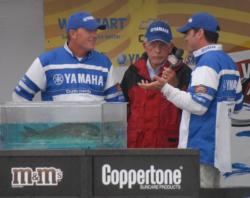 Frank Jackson of St. Petersburg, Fla., and Charles Espenlaub of Lutz, Fla., get the unofficial award for least number miles ran during the event to make the top 5.

Jackson and Espenlaub were fishing just 11 miles from the launch site and finished the event in fourth place with a three-day total of 38 pounds, 4 ounces worth $3,056.

“Frank and I love visual fishing,” Espenlaub said. “We came here, saw all this pretty, clear water and looked for a shoreline where we could stake down, keep quiet and let the fish come to us. It worked out all week. The clouds and wind hindered our sight-fishing today so we just had to blind-cast with the faith that the fish were there.” 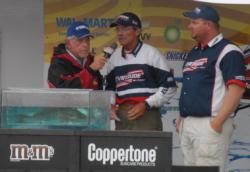 Ochs and Crafton were sharing the same enormous school of fish that Wiggins and Tanner were on.

“It was a lot tougher in there today,” Crafton said. “It was much slower to get going. There was a lot of local boat traffic first thing, which always makes redfish a little more wary. But once things settled down there was a lull in the boat traffic about mid morning and that big school showed up and we caught them pretty good for about an hour and a half.”

“We used spoons and Gulp, but the fish were so thick you could have probably thrown a bare jighead in there and caught them,” he added. “It’s truly been an incredible few days of fishing. I literally had a Charlie horse in my arm yesterday from reeling in so many.”

The fourth and final Redfish Series event in the Eastern Division for 2008 will be held in Fernandina Beach Sept. 4-6.