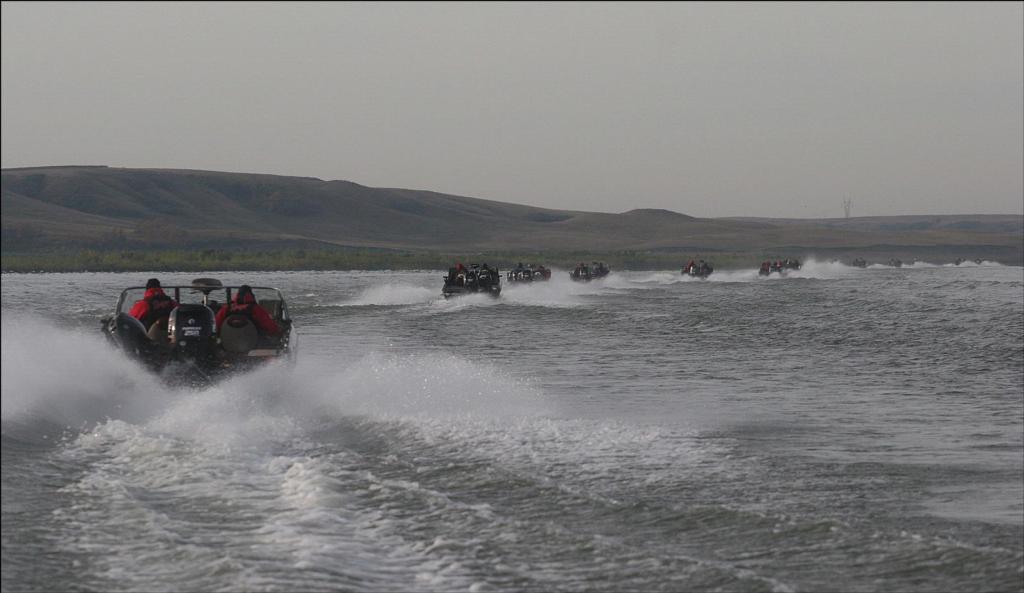 Pro angler Tony Renner of Hutchinson, Minn., wishes he had taken the advice of his co-angler, Jimmy Cox of Bono, Ark., on day two of the 2008 FLW Walleye Tour Championship. The first two fish the duo landed measured 16 and 18 inches, and Renner figured they could do much better. So he released both fish, much to the chagrin of Cox, who said, “Never throw the first fish back. It’s a bad omen.” His 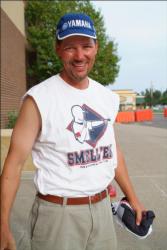 words were prophetic, for Renner and Cox ended up with just two fish, three shy of their limit, and both anglers were relegated to the sidelines for the remainder of the tournament. “I figured we needed at least 15 pounds,” Renner explained. “We had to go for it, and those first two wouldn’t cut it.”

Lynn Jurrens of Watertown, S.D., fishing in his first FLW Walleye Championship, surprised the crowd when he stepped onto the stage at Thursday’s weigh-in. Shortly after weighing his fish, Jurrens shouted, “Are there any Twins fans out there?” He then peeled off his fishing shirt to reveal a Minnesota Twins baseball shirt. For a fan who watches the team all the time, the past two days were great, as the Twins won the first two games of a crucial series with the Chicago White Sox. “It was wonderful,” Jurrens said of the 9-3 and 4-3 Twins victories. “The crowds were really into it. Everybody was standing up for each pitch.” As for his T-shirt, Jurrens said, “I once spoke at a funeral wearing this. He was a good friend.”

All week long anglers participating in the 2008 FLW Walleye Tour Championship have been running into the numerous hazards that make up the Missouri River, including sandbars, underwater stumps and the like. But Brett King and his co-angler, Fred Ahrens, ran into a hazard of a very different sort while heading back to the launch site on day two. They rounded a bend in the river at full throttle and 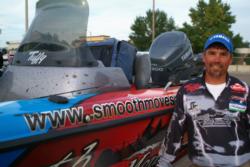 suddenly found themselves flying along with a flock of ducks. “As I’m driving, I don’t look up from my (GPS) screen,” King said. “As we come around this bend, we hit a flock of coots off-guard. They were everywhere, this way, that way; one nearly took my hat off, and another hit the windshield. As one came up, it just hosed the boat with dung. It looked like a garden hose going full blast. Man, it was everywhere.” Needless to say, King’s first stop after the weigh-in was at a car wash.

“We made it up and down the river safely, and everything still works on the boat, so I’m happy.” – Kelly Klemm

“I figured this event was in Bismarck, so I might as well fish in Bismarck.” – Dan Hassevoort, on why he bucked the trend and fished upstream around Bismarck rather than downstream near the border.

“We joined the sandbar club today. I never had a sicker feeling than to think I just threw away the tournament.” – Bill Shimota

“The fish must be getting beat up where we’ve been catching them. We need to have some more move up.” – Bobby Crow

28: limits caught on day two among the field of 54 boats.

6-4: weight, in pounds and ounces, of biggest fish of the tournament so far, caught by Todd Riley.

521: cumulative weight, in pounds, of all walleyes weighed through the first two days.

12: place finish on day two of Ron Seelhoff, who led the tournament after day one.

0: number of walleyes caught on day two by Pete Harsh, 2008 Angler of the Year.

36: number of places advanced on day two by Riley, the biggest gain of the tournament.