Let’s win one for the family 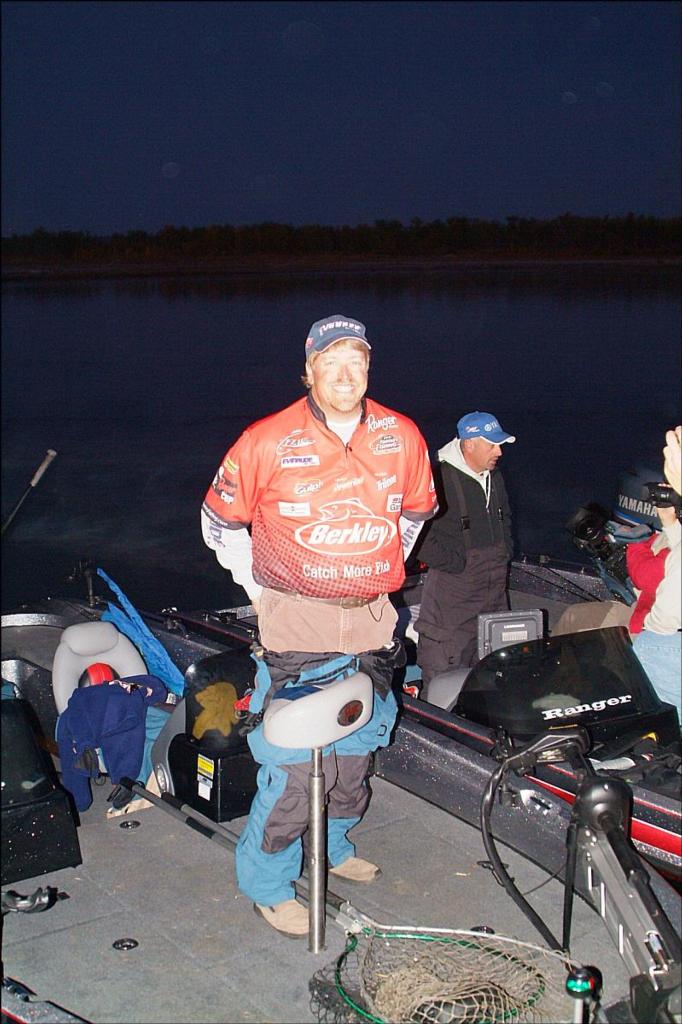 BISMARCK, N.D. – Sunrise over the Missouri River and the final round of the 2008 Walmart FLW Walleye Tour Championship is about to begin. Ten pros are preparing to hit the water on one of the biggest days of their respective careers, and all but one has a serious look on his face.

That would be Tommy Skarlis, the leader with 15 pounds, 13 ounces. Within certain striking distance are Ross Grothe with 14 pounds, 3 ounces, Robert Blosser with 14 pounds, 1 ounce, and Todd Frank with 12 pounds, 15 ounces.

But Skarlis isn’t bothered by the nearness of the competition. The amiable pro from Waukon, Iowa, didn’t win four previous walleye tournaments by taking himself or his sport too seriously, even with a possible $150,000 payday coming up.

Crazy indeed is one half of Skarlis’ personality. But another side reveals a hard-working pro whose feet are planted firmly on the floor of his boat.

“I’ve got one child in diapers and another who’s gobbling up all the food you put in front of him,” Skarlis said. “That and the fact that college is looming in the future, well, $150,000 clams would make a big difference.”

The biggest payday in walleye tournament fishing is what brought 54 pros to Bismarck for a four-day championship tournament that began Wednesday. Ron Seelhoff led after day one, only to fall by the wayside. Ted Takasaki took over the top spot after day two, but saw his best bite get blown away by stiff north winds. Both used trolling presentations to catch their fish.

Skarlis has trolled too, but Friday he went back to the methods that have defined his career: rigging and jigging. He wouldn’t say with what bait he was tipping his rigs with, but just prior to take off he was seen stashing a box of nightcrawlers under a landing net.

He then turned to face the media a final time before takeoff.

“I have to have fun and enjoy the day,” he said. “I’m going to get out there, duke it out and catch some fish. I’ve never won on the FLW and if I could win here today it would be a major milestone in my career.”

Like all the other pros in the final round, Skarlis is running a Ranger 620VS powered by either an Evinrude E-Tec or Yamaha outboard engine. He said using the same equipment as he uses throughout the season has made a big difference in the championship.

Five boats down the bank, Takasaki was hoping to recapture the magic that put him in first place Thursday. Perhaps he’s even reaching back for some of the mojo that garnered him a victory in a PWT championship on the Missouri River in 1998.

“I’m confident I’ll get fish, but with a five fish limit today I’ll have to make decisions as soon as I catch them,” Takasaki said. “Yesterday that north wind affected my big fish spot. I’ll try it again today.”

Weigh-in begins at the Bismarck Civic Center and 4:30 p.m.