Back on Delta for big payday 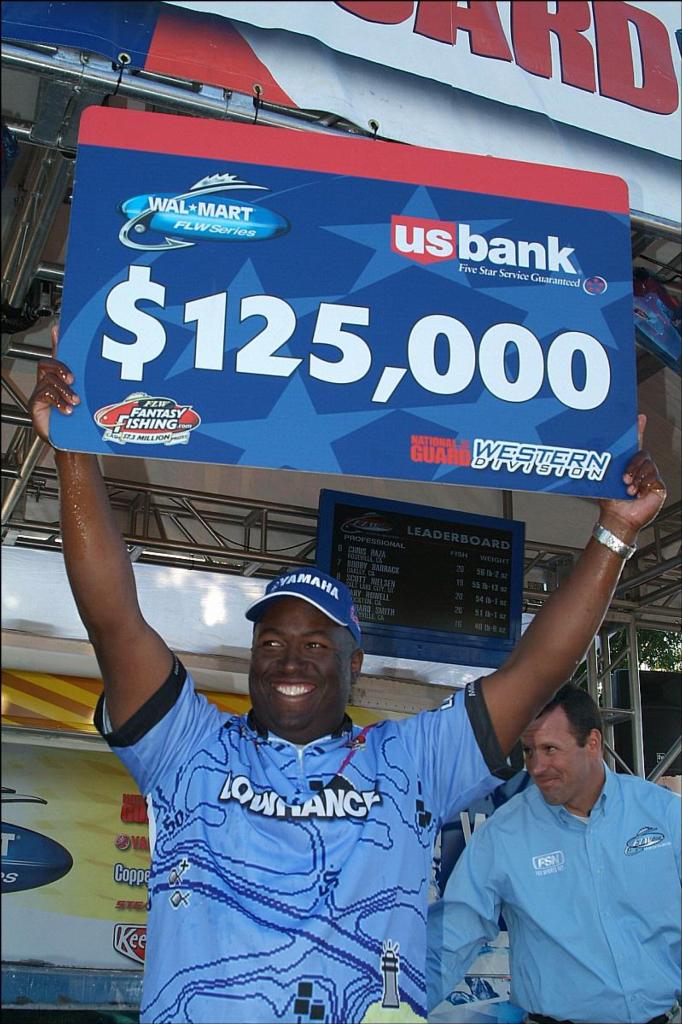 OAKLEY, Calif. – At 12:30 p.m. on the final day of the last Walmart FLW Series National Guard Western Division tournament of the season, Ishama Monroe had two bass weighing a combined 2 pounds in his livewell.

The Hughson, Calif., pro was an hour and a half away from a possible $125,000 payday, and the situation didn’t look good. He needed a good weight to hold off Mike Reynolds, Mark Tyler, Robert Lee and Bobby Barrack, all of whom were within 8 pounds, a pittance on the California Delta.

So what did Monroe do?

“I sat down, drank an energy drink, relaxed my head, put a couple of rods away and started all over,” said Monroe, whose four-day total of 70 pounds, 6 ounces earned him his first FLW Series win. “I went back to one of my old spots, and it paid off real well.”

Monroe had won on other tournament circuits, but had yet to crack the top 10 on the FLW. Now he has a victory in an event that tested pros like few others. A bite that was off to begin with got even tougher when the wind blew at a steady 20- to 30-mph clip, and both air and water temperatures plummeted.

It was enough to make even the savviest pro lose his cool, but Monroe brought a five-fish limit to the scales each day. After a poor day one, he made his move on day two with 22 pounds, 5 ounces, good for second place. He took over first place on day three with 14 pounds, 12 ounces and capped off the victory with a 17-pound, 2-ounce bag on Saturday.

Monroe said he had hoped for a frog bite when the tournament started. He started fishing a snag-proof frog and had some success, but the bass weren’t really nailing it. When the wind and cold arrived, it was time to change gears. Monroe switched to a Sweet Beaver, a bait used by nearly every one of the top10 pros at some point during the tournament. He rigged it with 1 1/2-ounce ounce tungsten weight and No. 5 hook. He used an 8-foot flipping stick with a soft tip.

“Everybody thinks that when you fish the mats you need a heavy, stiff rod to pull the fish out,” Monroe said. “But what happens is that heavy tungsten weight pops their mouths open and you miss a lot of fish. This rod lets you load up and bury that hook in the roof of the mouth.” 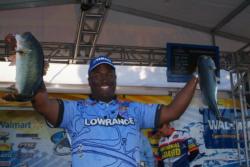 While other pros struggled to get bites, Monroe got as many as 50 per day, though that number dropped to about 25 on day four.

“I always play the numbers game,” he said. “Catch as many as you can and weigh your five biggest. That’s all you can do.”

In many ways, the weather was the story of the tournament. It got worse each day. Strong winds and a cold front took their toll, especially on Friday when most pros weighed their lightest bag.

“It crushed my bite,” said Richard Smith, who caught just one fish weighing 2 pounds, 5 ounces on day four and finished in 10th place. 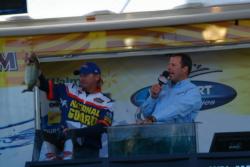 Monroe has won the tournament, but Mark Tyler has the distinction of pulling the heaviest day-four bag: 17 pounds, 13 ounces.

Tyler grew up in the Bay Area before moving to Vian, Okla., five years ago. He has ample experience fishing on the California Delta, and he used it to net second place.

“I fished conservatively for the first two days because I didn’t want to burn up all my spots,” Tyler said. “A four-day tournament is a marathon. It’s hard to be consistent. I saved a few stretches, and fortunately one of them worked out when I needed it today.”

Tyler said he hadn’t fished the Delta in the fall for five years, but he remembered what worked the last time.

“I went back old school,” he said. “I had three primary baits: a spinnerbait, a crankbait, and I flipped a jig. It doesn’t get any simpler than that. On the first day, a Storm Wigglewart in crawdad-red worked best.

“On the second day I caught some good fish flipping a ¼-ounce black jig. Today, with the wind muddying up the water, I went with a plain, old white spinnerbait with gold and silver blades. It was the right decision. It’s what they wanted today.”

Reynolds chugs to the finish line in third

Mike Reynolds of Modesto, Calif., led this tournament after two days with 44 pounds, 8 ounces. But he brought just 6 pounds, 2 ounces to the scales on day three, and that cost him the victory. He had a combined weight of 50 pound, 10 ounces heading into the final and trailed Monroe by less than 3 pounds.

But it was too much to overcome. On day four Reynolds weighed 10 pounds, 6 ounces and dropped into third place.

Like everybody else, Reynolds used a Sweet Beaver on a 1 1/2-ounce weight.

Reynolds had a lot on his mind on day four. The grandmother who raised him had a stroke the night before. But while out on his boat, he got news that she’s doing fine and will be released from the hospital soon.

“When I was a kid,” Reynolds said, “she’d take me to the lake, put me in a rowboat, tie on 50 feet of line and let me go down the bank. When it was time for dinner she’d pull me back in. That’s what my grandmother did for me.”

Charlie Weyer of West Hills, Calif., who placed fourth with 57 pounds, 14 ounces, said he caught 15 fish Saturday by working a Sweet Beaver very slowly under the mats. He pitched the plastic bait through the mats on a 1 ¾-ounce weight and let it sink to the bottom and sit there, often for more than a minute, before popping it. On some mats he pitched the bait through the cover 20 times.

“I lost a 5- or 6-pounder today that might have cost me the win,” Weyer said.

Fifth-place Lee remembers the one that got away

On the first day of the tournament, Robert Lee of Angels Camp, Calif., was working the mats when he set the hook on a big bass. He battled the brute to the surface only to see the hook pop out.

“It laid there, rolled around on the mat a couple times and found its way back home,” he said. “That was the only fish I lost through the whole tournament.”