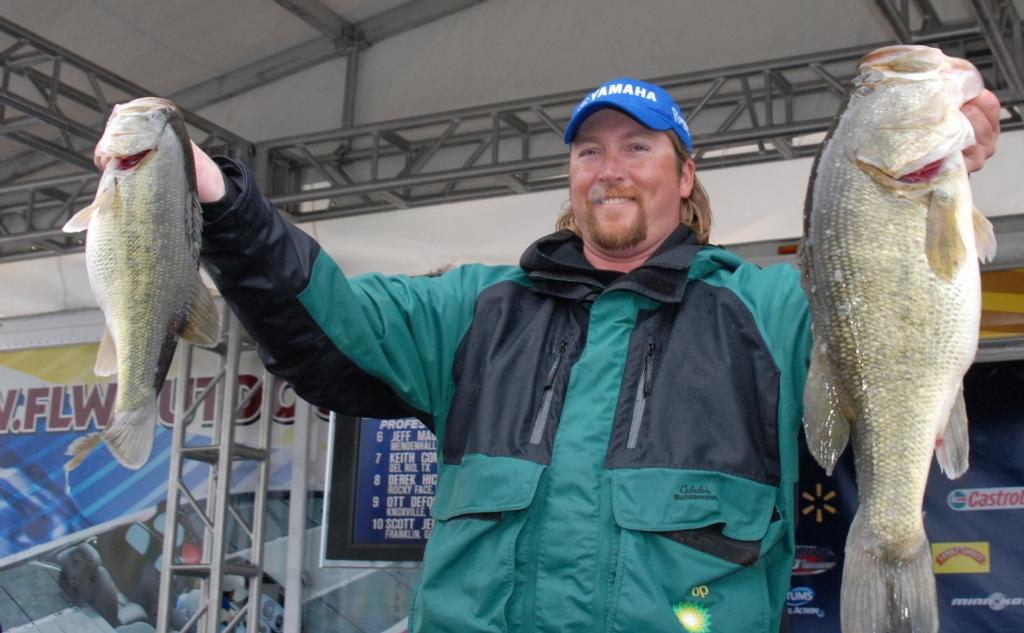 EUFAULA, Ala. – The rain poured, the thunder boomed, the wind howled – and Lake Eufaula’s bass kept on chomping during day two of the Walmart FLW Series event in Alabama.

Although there were less fish weighed in overall Thursday, the number of big fish really turned out today. In all, seven pros in the BP Eastern Division tourney cracked the 20-pound mark, compared to just three yesterday.

It’s no coincidence that these two Florida-based grass-masters are atop the ranks at Eufaula. Both pros have very similar fishing styles: They like to use the big rod in shallow grass, and both love Lake Eufaula, especially when it’s high and muddy.

Kenney admitted to flipping up a few of his fish today, but says that his big catch really came from a switch in areas.

“I have been fishing down south in the clearer water,” Kenney said. “That’s where I fished yesterday and caught a decent limit.

“But late in the day I came back up the lake and checked a few spots and culled twice. I really didn’t think much of it until I got in trouble down south today – I just had a couple of keepers. So at about noon I came back up here, went into where I culled twice yesterday, and it was on big time. In an hour I caught seven or eight big ones, and a couple of them came on a Berkley Gripper Jig.”

Kenney wanted to be more explicit about the details of his pattern, but said it would be too easy for others to figure out.

“It’s a real specific deal, and these are not spawning fish,” he added. “Once I caught those big ones this afternoon, I went looking for similar stuff and culled again immediately when I found the right water that fits the pattern.

“I think it’s something that’s just developed with the dropping water because it was not really happening in practice. But it’s definitely going on now, and even with this nasty weather, I can’t wait to get back out there again tomorrow.”

Even though Browne is an ace at the big stick with the short line as well, he made it clear that his fish today actually came on a spinnerbait.

“I’ll certainly flip if I have to – and I caught a couple on the Berkley Chigger Craw yesterday – but if they’ll hit that spinnerbait like they did today, I won’t put it down.”

Browne noted that he is fishing south of Lakepoint, but not all the way south in the clearer water.

“It’s pretty muddy where I’m fishing, and it’s no secret area – there are lots of boats around – but I’m just trying to slow way down and do something a little different with that spinnerbait to trigger the bites,” he added. “The fishing was actually better for me today; I probably caught 15 bass on the day.”

But the Land O’Lakes pro seemed unconcerned about losing the lead and was content with his 17-2 catch today.

“I’m pretty happy with my catch,” Defoe said. “Look at the records for this lake, and you’ll see that it always takes a solid 15- to 18-pound average to win here. It’s not like you’ve got to drag 20-pound-plus bags in here every single day – it’s going to taper off eventually. As long as I’m in that 16- to 17-pound range each day, I’ll take my chances and see where I end up.”

Defoe had to switch gears a little bit today. His topwater bite from yesterday disappeared in the downpours today, and he had to slow down and mine his areas with a different lure for his bites.

“When it’s pouring buckets like that and the thunder is booming, I think shallow-water fish kind of hunker down,” he said. “The slower baits were definitely more of a key for me today.” 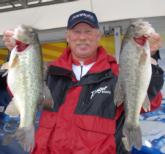 Tom Mann Jr. of Buford, Ga., moved up into fourth place today with a 20-pound, 4-ounce catch that brought his two-day total to 39 pounds, 1 ounce.

Mann is slow-rolling a spinnerbait in hydrilla in supermuddy water.

“It’s pretty basic fishing, really – nothing special,” Mann said. “I’m just really thumping that spinnerbait through the grass slowly and being extra thorough because of the water color. I’m not getting a ton of bites – just enough each day. If the water would ever clear up – even just a tad – I think I could really do some damage and manage my fish. But as long as the mud is thick, I’m going to have to scratch and scrape for all I can get.” 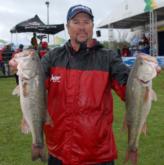 Jimmy Millsaps of Canton, Ga., brought in five bass for 23 pounds today to move into fifth place with a two-day total of 37 pounds, 13 ounces.

Millsaps noted that the difference today was really just execution – he got everything that bit in the boat.

“I actually lost two great-big ones yesterday,” Millsaps said. “But that’s the way it is in this muddy water: I’m fishing a spinnerbait, and sometimes they just bite at the vibration and don’t get the bait good. Today I really concentrated on fluttering that bait and hesitating it in the right spots to help them get a hold of it better – and it may have worked because I connected with everything that bit.”

O.T. Fears of Sallisaw, Okla., caught the Folgers Big Bass on day two in the Pro Division. It weighed 9 pounds, 8 ounces and earned him $500.

Rounding out the top 10 pros in the FLW Series on Lake Eufaula after day two:

The 2008 Co-angler of the Year from the BP Eastern Division of the Walmart FLW Series, Chuck Thurlow of Auburn, Ala., now leads the Lake Eufaula event with a two-day total of 36 pounds, 4 ounces.

On day one, Thurlow caught 22 pounds, 3 ounces and backed it up with 14 pounds, 1 ounce Thursday.

During two days of practice, Thurlow discovered a particular lure that has done all the damage from the back of his pros’ boats.

“The best way to describe it is to say that it’s a finesse swimbait, and color has a lot to do with it,” Thurlow said. “And the biggest problem I have now is that I’m completely out of them. I might have to make a road trip up to Columbus tonight to find some more.”

Tim Peek of Sharpsburg, Ga., brought in five bass for 17 pounds, 5 ounces to amass a two-day total of 34 pounds for second place.

Rob Hicks of Lula, Ga., holds down the third position with a two-day total of 29 pounds, 14 ounces.

Derrick Snavely of Rogersville, Tenn., is in fourth place with a two-day total of 28 pounds, 5 ounces.

Chris Hults of Vancleave, Miss., rounds out the top five with a two-day total of 26 pounds, 4 ounces.

Rounding out the top 10 co-anglers in the FLW Series on Lake Eufaula after day two:

Mike Tanksley of Crossville, Ind., caught the Folgers Big Bass in the Co-angler Division on day two. It weighed 8 pounds, 1 ounce and was worth $333.