The 2009 FLW Walleye Tour season begins April 15, but the trash talking in the pundit world has already begun. Fishing fans, welcome to the third season of Pundits’ Picks Walleye – a pretournament column featuring the most competitive walleye prognosticators in the land. The southern boys think we’re odd, but we hearty Midwesterners love our walleyes and you can’t tell us otherwise.

For those new to the feature, log on to FLWOutdoors.com the Friday before each FLW Walleye Tour event to see who the so-called experts like in the upcoming contest. We can’t promise accuracy, we can’t promise precision, but we can promise a little good-natured pretournament trash talking. The competition will pit pros v. staff throughout the season to see who qualifies for the pundit championship. After three regular-season events, each pundit will be seeded according to their record for the playoff round. Only three pundits advance from the playoff round to the championship, a winner-take-all affair that goes to the person who accumulates the most points.

Last thing, the disclaimer: The picks in this column in no way represent any sort of favoritism on the part of FLW Outdoors staff or its pro anglers. These are merely guesses – only arguably educated – as to who we think might do well at any given tournament. With that in mind, here are the picks. 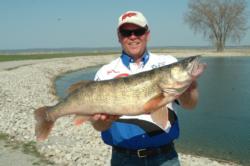 The 2008 Walleye Tour opener was held on Lake Erie in mid-April and the results were impressive. Rookie pro John Swanstrom won the tournament with a four-day cumulative weight of 143 pounds, 7 ounces, which shattered the previous record held by Pat Neu. The gaudy figures don’t tell the whole story though as the bite didn’t turn on until right before the tournament. In fact, Swanstrom struggled mightily in practice – catching only a handful of fish in four days. The bite changed for the better when the weather stabled and the water clarity subsequently improved. Unfortunately, another cold winter has 2009 looking eerily similar to 2008. The early reports have the lake dirty and the fishing worse than expected. Some pros are even practicing in the Detroit River, which is clearer but is a long run from the official takeoff in Port Clinton. Canadian waters are off-limits. Unless the long-term forecast changes, a 25-pound sack would be considered a solid catch.