Conditions align for slugfest at second stop of 2009 season

RED WING, Minn. – After a cancellation on day one, pro Pat Byle tallied a three-day weight of 92 pounds, 9 ounces en route to his first Walmart FLW Walleye Tour victory. The season-opening tournament took place on Lake Erie, widely considered the best walleye factory in the world. But with steadily improving conditions on the Mississippi River, it’s entirely possible that the winner of stop No. 2 will surpass that total.

The Mississippi River can’t match the sheer number of 8- and 9-pound females like Erie, but the fishery is healthy and the walleyes are aggressive. As the water temperature rises, the bite continues to improve. The walleyes and saugers in Pools 3, 4 and 5 are resting after having completed the annual reproduction cycle, which means they are looking for an easy meal. Once they have finished resting, they become eating machines. 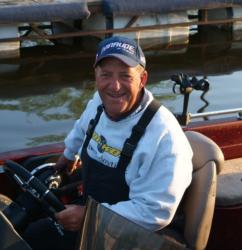 In postspawn situations such as these, small river honeyholes often produce big. These areas can only hold two or three boats, so getting to the spot first is crucial. At the 2006 Walleye Tour event held out of Red Wing, Jeff Ryan put on an impressive live-bait rigging display in the Vermillion River. The following year BP pro Jason Przekurat won his first tour-level event from a small area in Pool 4 called Katrina. On Saturday, Paul Kennebeck reportedly won the FLW Walleye League event in Katrina. Kennebeck’s weight was a staggering 35 pounds, 10 ounces.

Madison Lake, Minn., pro Tom Brunz is boat No. 96 out of the field of 100. He knows that today he won’t have a crack at fishing Katrina or one of the dozen or so other prime postspawn locales.

“We’re going to head down to the lake (Pepin) and go for saugers, because they have been pretty consistent,” he said. “The bigger walleyes have been a little tricky, but the bite is improving every day.”

After securing a limit, Brunz will attempt to find a kicker female walleye or two.

“A good limit of saugers with one kicker will weigh 18 pounds. That’s what we’re shooting for today.”

Brunz practices with Welch, Minn., pro Scott Allar, one of the pretournament favorites. Allar has finished second twice on this stretch of the Mississippi, once at the championship in 2003 and again in 2006. He thinks this event, like 2006 and 2007, will be won on a small spot in Pool 4 with live-bait rigging.

“Those spots are such gambles,” said the Berkley pro. “Your weight can look great for a day, but it’s difficult to duplicate it. I’ve been fishing this river for a long time, and Katrina never used to replenish the way it does now.”

Allar plans to play it safe and start in the lake.

“We’ll use leadcore and cranks and get our five saugers. From there, we’re hoping for an upgrade or two. I could be wrong, but I would say about 80 pounds will win it.”

The community is invited to attend daily takeoffs and weigh-ins, which are free and open to the public.

Every angler who receives weight credit in a tournament earns points, with 150 points awarded to the winner, 149 to second, 148 for third, and so on. These points determine Land O’Lakes Angler of the Year standings. The top 50 pros and 50 co-anglers in the standings will advance to the FLW Walleye Tour Championship in Bismarck, N.D., Sept. 30-Oct. 3 for a shot at top awards of $150,000 and $20,000, respectively.

For those who can’t catch the weigh-in action in person, FLWOutdoors.com offers FLW Live, an online application that brings fans real-time weigh-in results.