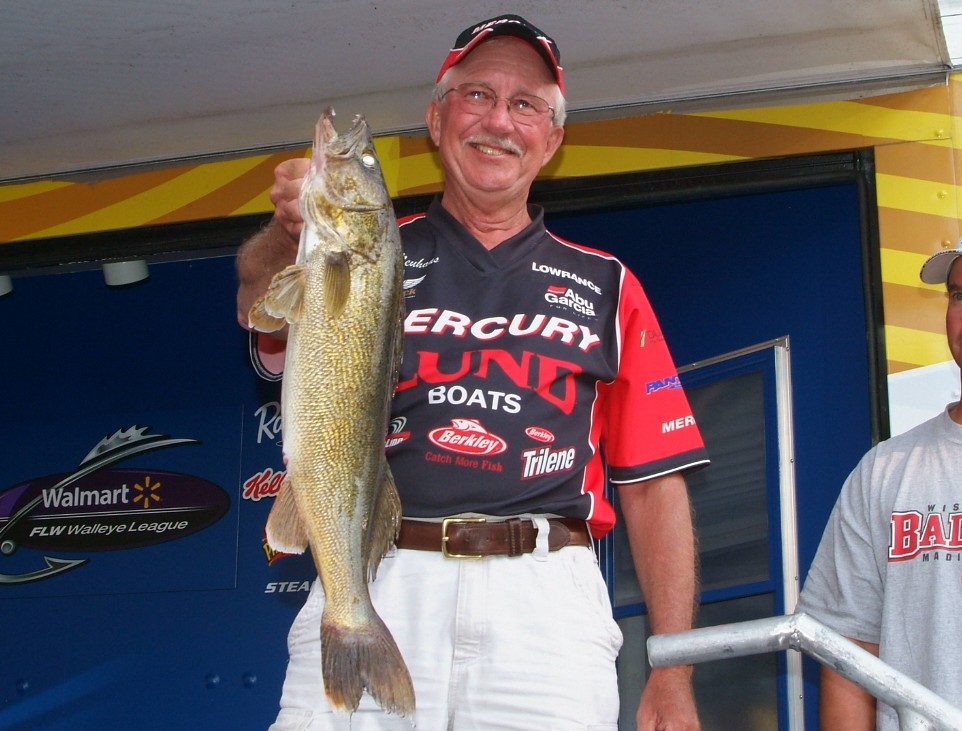 CHIPPEWA FALLS, Wis. – Place a strict slot limit on a highly pressured fishery, and you’re nearly guaranteed to have a tight leaderboard. What separates an angler from the pack in these slot tournaments is a big kicker. The heaviest walleye on day one of the Walmart FLW Walleye League Finals was caught by Bernie Neuhaus, and not surprisingly, Neuhaus is on top of the hill.

Lake Wissota is chock full of walleyes, and the field proved it today by bringing in 48 limits. But many are small, and most of the nicer fish fall into the 14- to 18-inch slot. For recreational anglers, this is a great problem to have as the critical reproducing fish are protected. In other words, the future of the fishery couldn’t be brighter.

But for the tournament angler, the slot can be frustrating. Just ask last year’s Walleye League Finals champion Jimmy Hughes, who sorted through roughly 50 walleyes on the day. But none were longer than 18 inches, and his weight looks relatively unimpressive at 3 pounds, 8 ounces.

Neuhaus is happy with his leading catch of 7 pounds, 4 ounces. He achieved that weight on only four fish, but the one that got away is still haunting him.

“We had a great day, but we almost had a fantastic day,” said the leader. “I say that because we lost her sister halfway to the boat. We know it wasn’t a catfish; catfish don’t come unbuttoned on cranks.”

“We set out with a game plan to get our slots in the morning and then hunt for big fish out deep. But we caught that big fish in shallow water. So we ended up staying in that one area all day. It hurts not having that fifth fish, especially knowing we lost that other big one.”

In addition, Neuhaus and his day-one partner caught several walleyes that were just over 14 inches in length and had to be returned.

Still, the Glencoe, Minn., native carries a 1-pound, 5-ounce lead into the second day of competition.

“This is my first time leading in seven years as a pro. It feels great – I’ll gladly take it.” 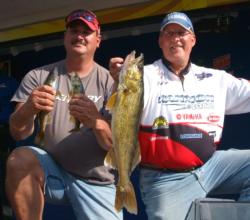 Neuhaus qualified for the League Finals by finishing 27th in the Minnesota Division points race.

In second place is Kildeer, Ill., boater Jonathan Rohde with 5 pounds, 15 ounces. Rohde caught the second biggest fish of the day, a 23-incher that weighed over 4 pounds. Like Neuhaus, Rohde only managed four fish. His kicker was also a pleasant surprise.

“I prefished all week, and I never saw an over until today,” he said. “We caught that big one at about 1 p.m. It came from my primary spot, but we had left it and came back. When it bit, we were just trying to fill a limit. My original strategy was to get four in the box and then troll leadcore in the river. Once we got the big fish, we didn’t have to go to that plan.”

Rohde was understandably tight-lipped about his presentation, allowing only that he is live-bait rigging in a channel.

“The fish are not where you would expect them to be this time of year. I think the bite was actually slower today than the last two days. Yesterday we released nine fish that were in the slot. Today, we didn’t catch any in the slot.” 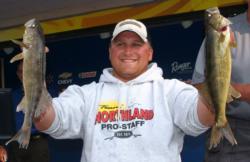 In third place is boater Dusty Minke, a standout in the Minnesota Division. Minke was the only angler to catch two overs on the day, but his overs barely surpassed the 18-inch mark. His total weight was 5 pounds, 10 ounces.

“That’s where I wanted to be,” said Minke. “I was going for overs.”

“I figured I am in the championship, so why not go for big fish? That’s what you’ll need to win anyways.”

Minke is excited about tomorrow because he never touched his best water on day one. With two overs in the box early, he didn’t have to.

“I hope it will hold out, but you never know. Practice was good.” 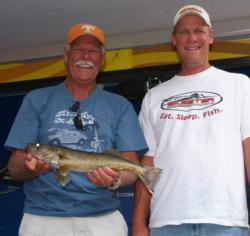 throughout the day, he will make an effort to fill his limit with 13-inchers.

“The last three years I’ve been close in the finals. I really like these tournaments at the end of the year.”

Klein, Filkins round out top five

“We caught probably 30 walleyes today, but that big one was the most important,” Klein said.

That fish measured 19 1/4 inches and was the third walleye of the day – biting at roughly 11 a.m.

“Everywhere we caught the overs in practice, we didn’t catch anything today. And where we went for 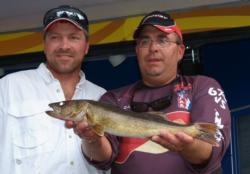 Five ounces behind Klein is Terry Filkins of Lake City, Minn. Filkins took a devastating 8-ounce penalty on a dead fish, but still ended the day in fifth.

Rounding out the top 10 pros on day one on Lake Wissota:

Co-angler Craig Cayemberg of Valders, Wis., had the privilege of fishing with Neuhaus on day one. Together the two caught four walleyes weighing 7 pounds, 4 ounces.

The crucial 6-pounder was caught on Neuhaus’ rod, but Cayemberg was the one doing the reeling.

“We were having some issues with snags and whatnot,” Neuhaus explained. “It sounds strange, but the big one came on my rod. Craig reeled it in, and I netted it. The important thing is that we both get credit.”

Rounding out the top five co-anglers on day one on Lake Wissota:

Day two of FLW Walleye League Finals action on Lake Wissota begins at 7 a.m. Central time Friday as the field takes off from the Rod and Gun Club, located just off Highway 178 in Chippewa Falls. The full field fishes the first two days and then the field is trimmed to the top 10 pros and top 10 co-anglers for the final day of competition.