Welcome to the final installment of Pundits’ Picks. After a long season of walleye prognostication, it all comes down to this: three qualifying pundits competing in a winner-take-all championship. For the second consecutive season, that championship will take place in Bismarck, the capital city of North Dakota.

The Lake Winnebago event was the fourth and final stop on the 2009 Walmart FLW Walleye Tour and also served as the first round of the pundit playoffs. The high score in Oshkosh, Wis., went to staff ace Sharon Reynolds, who accumulated a whopping 661 points. Three of Reynolds’ five picks made the top 10 and Chevy pro Tom Keenan wasn’t far off either. Unofficially, those 661 points were the most recorded in any event this year. Her unlucky opponent in the Pro Division was Jason Kerr, who tallied 591 points. Kerr’s score was the second highest overall, but the tough draw sent him to the proverbial pundit showers.

In a heated playoff matchup, I outscored Pro Division pundit Eric Olson 580 to 570. While local pro Jimmy Hughes did much of the heavy lifting for Olson, I relied on Angler of the Year Chris Gilman. Until day three, it looked as though I had no chance to advance. But two-time Angler of the Year Jason Przekurat came out of nowhere and caught a limit Friday weighing 12 pounds, 3 ounces. Przekurat went from the bottom of the heap to the middle and earned me 90 greatly-needed points.

In the final matchup, Rick LaCourse gets the nod over Vince Meyer on a technicality. LaCourse not only gets to compete for the pundit championship, he will also vie for the on-the-water title. LaCourse earned his ticket to Bismarck by the winning the Angler of the Year award in the Michigan Division of the FLW Walleye League. Along with Toby Kvalevog from the Minnesota Division, John Balla from the Heartland Division and Brian Gustke from the Wisconsin Division, these four anglers will add to the already star-studded field.

While it’s all about weight for the pros, the pundit that accumulates the most points in Bismarck will be crowned the 2009 champion. Last thing, the disclaimer: The picks in this column in no way represent any sort of favoritism on the part of FLW Outdoors staff or its pro anglers. These are merely guesses – only arguably educated – as to who we think might do well at any given tournament. 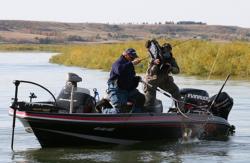 Although the location is unchanged and the dates are nearly the same, the Missouri River is much different this year. Last season the Missouri River was extremely low – so low that boat navigation was tricky. This year the water has returned to normal levels but is warmer thanks to an unseasonable September. What that means for the fishing remains to be seen, but it’s a safe bet that many of the best areas last year won’t be produce in a similar fashion. The Missouri River near Bismarck is chock full of 2- and 3-pound walleyes. Obtaining a five-fish limit each day shouldn’t be a problem for most of the 54 pros in the field. But in order to obtain separation, a kicker will be needed. The most common patterns will include trolling crankbaits, jigging and live-bait rigging. Generally speaking, cool, stable weather is optimal for a strong bite as the walleyes put the fall feed bag on. Another thing to remember is that unlike the four qualifying events, weights will be cleared after day two. Walleye Tour anglers seemingly will have to manage their fish in order to capture the six-figure first-place purse.