Riley coasts to the cutoff 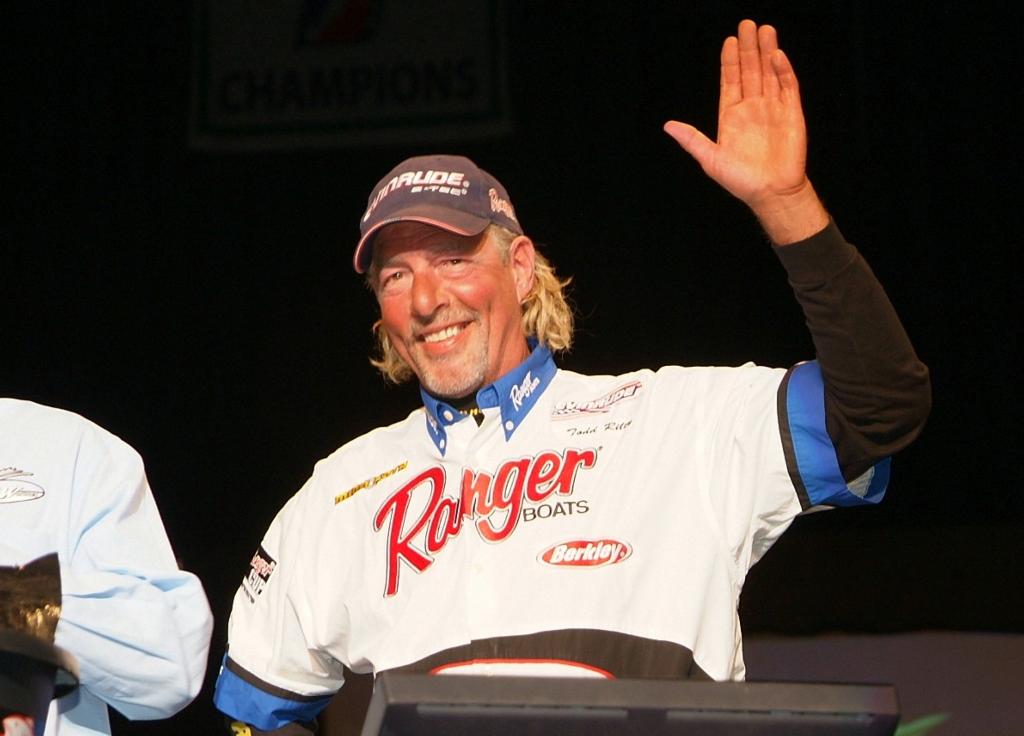 BISMARCK, N.D. – The wind switched from the southeast to the northwest on day two of the Walmart FLW Walleye Tour Championship. Yesterday, the wind fought against the Missouri River current, but Thursday with more flow, the walleyes repositioned themselves. Pro Todd Riley once again made the necessary adjustments – sacking a workmanlike 12-5 to retain his lead at the halfway point in the tournament.

Despite weighing in 23 pounds, 4 ounces on day one, Riley was a visible wreck. He was nervous about boat pressure in his area, nervous about the changing conditions and nervous the media would reveal his pattern information. Today he was noticeably calmer, and that likely has to do with 44 of the 54 boats being eliminated.

“The fish were in different places,” said Riley, who finished the two-day opening round with 35 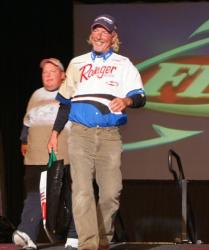 pounds, 9 ounces. “The water was 2 feet lower, and the current was absolutely screaming. We only caught six fish today. I was basically fishing to get enough weight to get my partner (Dave Smith) into the cut. Then the plan was to go prefishing for the finals. Unfortunately, it just never happened.”

Riley thinks that the winner of this event is going to have to identify an emerging pattern.

“There are going to be some new areas that start popping. I would have loved to have half the day to look around, but that never happened.”

Riley is still confident he can make the necessary adjustments on the fly. Those adjustments just might include a trip to Upper Oahe near the North Dakota-South Dakota border, a place he caught a 24-pound sack at last year’s championship. Surprisingly, his 23-4 on day one came from the river, as did his day-two weight.

“It definitely can be won in either. I kind of had it in my mind that I was going to fish this tournament solely in the upper river. But with these conditions, everything has been a lot of work. There’s quality fish in the river, but it’s riskier. I only have one spot in the lake, but they don’t move quite as much down there.”

Riley stopped and reflected at the halfway point in the season-ending tournament. Fresh off a victory at the inaugural AIM Championship on Lake Winnibigoshish, the Amery, Wis., native has the chance to do the unthinkable – claim two major championships in a single season.

“The way I look at it is (the Walleye Tour Championship) is two two-day tournaments. There are 10 winners in the first tournament, and only one in the second. Now, tomorrow the real tournament starts where we get to fish for big money.”

With his weight zeroed, Riley understands he can’t fish conservatively and take home the six-figure payday.

After catching a limit worth 14-7 on day one, Scott Steil finished the opening day tied for fourth place. After sacking 15-13 today, he moved up a few places to second – finishing with 30-13.

“We had no fish until noon, then we moved to our fourth spot and caught 10 legals,” said Steil, the winner of the 2008 Walleye Tour event on Cass Lake. “I knew going out today that we were going to have to change programs and make adjustments. Yesterday we caught 21 fish over 17 inches and had our five by 8:45 a.m.”

Steil said those adjustments were both locations and changes in crankbait color. Like most of the field, he is trolling, despite being a dynamite live-bait fisherman.

Steil has stayed in the river during the opening round, but isn’t closing the door on a long run to the lake.

“That’s a decision you maybe make on day four. I think I’m going to stay in the river tomorrow.”

Ron Seelhoff is in contention nearly every time a major tournament comes to Bismarck. He loves to troll 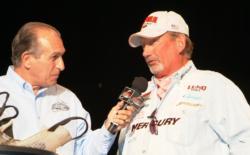 crankbaits, and the Missouri River is his perfect playground. So it wasn’t surprising to see him slowly climb the leaderboard and make another top-10 cut. After catching 14-7 yesterday, he calmly placed another 15 pounds in his livewell today for a two-day total of 29 pounds, 7 ounces.

“It’s a lot of work out there right now,” said Seelhoff, who is fishing within site of the Hazelton Launch Ramp. “We caught 15 legals yesterday and only 10 today.”

Seelhoff actually brought two different boats for this tournament. His big boat, which has a wheel, is used on days where he runs to the lake. He also brought a small 17-foot tiller, and that’s the vessel he used during the opening round.

“That little boat allows me to be real precise, and that’s important. I’ve been here for two weeks, and I was doing so good down on the lake. We were averaging 20 to 30 fish a day, and they were mostly good-sized fish. So I’m not exactly sure what I’m going to do tomorrow.”

Whether he’s in the river or on the lake, it’s a safe bet Seelhoff will be trolling crankbaits. Simply put, the 1999 and 2000 PWT Championship winner is the godfather of leadcore line – nobody does it better. 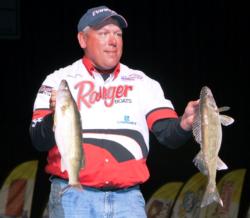 After finishing day one in third place, Hutchinson, Minn., pro Tony Renner fell one spot to fourth. Catching a 13-pound, 5-ounce limit Thursday, Renner finished the opening round with 28 pounds, 10 ounces. Although his weight fell off a bit, Renner was ecstatic to have made his first Walleye Tour top-10 cut at the championship.

“The bite was really tough,” Renner said. “One of my better spots from yesterday completely died; we only caught one fish there. I’m not exactly sure why, but there was more debris, which made it tougher to pull cranks.”

“The bites we got came in spurts. We’d go two hours without one, and then we’d catch two. We only caught seven total.”

Like his teammate Steil, Renner plans to stay in the river Friday.

“I’m pretty confident it can be won there.”

Riley wasn’t the only Amery, Wis., resident to make the cutoff. In fifth place was David Andersen, who brought in five walleyes on day two that weighed 15 pounds, 13 ounces and pushed his total weight to 28 pounds, 8 ounces.

A PWT veteran, this is Andersen’s first full season on the Walleye Tour, and this event marks his first top-10.

Rounding out the top 10 pros after day two on the Missouri River:

In the Co-angler Division, it looks like the 2006 championship all over again. In that event, held on the Missouri River, Jimmy Cox of Bono, Ark., led after the two-day opening round. Following him in second place was Jerry Chwierut.

That’s the exact same scenario this year on the Missouri River. The only difference is that in 2006 the tournament was held in Pierre, S.D., and this year’s championship is taking place upstream in Bismarck.

On the final day three years ago, Cox slipped to second and Chwierut took home the title. Cox is hoping history doesn’t repeat itself tomorrow. What he does have going for him is that he gets to reunite with Todd Riley, his day-one partner.

Walleye fans might remember that Cox took fifth place at the 2005 championship. He also fishes the Walmart FLW Tour and owns a bait company that makes incredible smallmouth tubes.

Cox finished the opening round with 34-3, while Chwierut accumulated 30-13. Both anglers will have their weights zeroed tomorrow as the entire top 10 starts from scratch.

Rounding out the top 10 co-anglers after day two on the Missouri River:

Day three of the FLW Walleye Tour Championship on the Missouri River begins as the top 10 pros and top 10 co-anglers field take off from Hazelton Launch Ramp at 8 a.m. Central time Friday for the first day of the final round. The winning co-angler will be determined tomorrow, and the pro winner will be determined by the heaviest accumulated weight from days three and four.