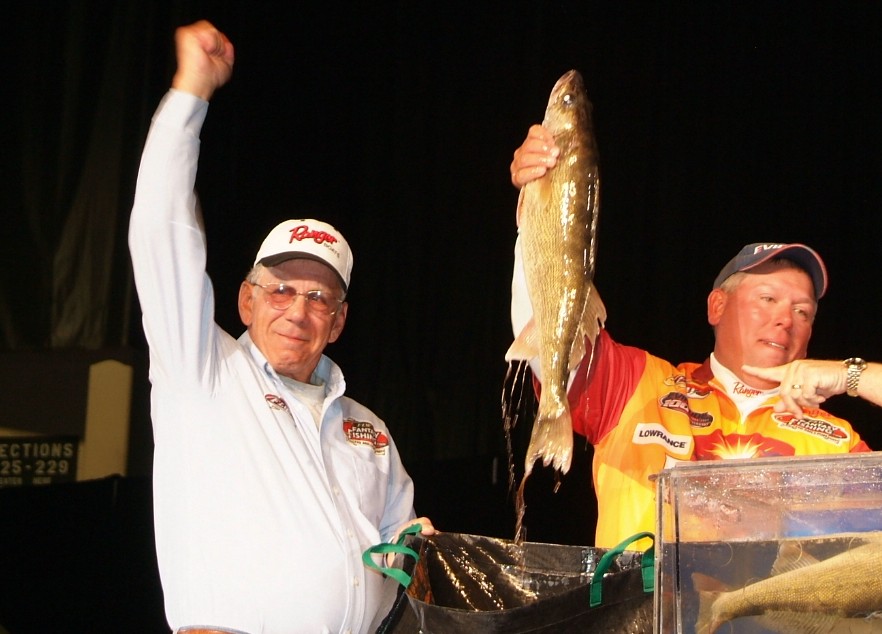 BISMARCK, N.D. – At 68 years young, Lowell Joy has been walleye fishing in the Bemidji, Minn., area for half a century. But he’s never had a better outing than day three at the 2009 FLW Walleye Tour Championship on the Missouri River.

Joy qualified for the final round of 10 boats after catching 13 pounds, 14 ounces on day one with pro Chris Gilman. On day two, he fished with pro Tommy Skarlis, the winner of the 2008 FLW Walleye Tour Championship, and the duo combined to catch five walleyes weighing 16 pounds, 2 ounces.

His opening-round total of 30 pounds even placed him fourth among the co-anglers – which meant he got to fish with pro Tony Renner on day three. That draw turned out to be a great one as the two 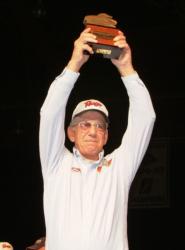 combined for the heaviest stringer of the entire tournament.

Joy, who was filled with emotion, said his victory has not sunk in.

“This is hard to believe – sort of unreal,” said the Vietnam War veteran and logger by trade. “All the pros I fished with are class acts. There is no doubt about it.”

Renner and Joy caught their fish by trolling bright-colored crankbaits on leadcore line. The two stayed close to the Hazelton Launch Ramp to maximize their fishing time. That was an important decision as they combined for only six fish the entire day. But two of those walleyes weighed over six pounds and the biggest one was over eight.

“When the big one bit, Tony thought it was a northern. I told him it was a walleye. If it was a northern it would be running. When we were bringing it in, it snagged one of our other lines. So as Tony was reeling, I had to cut the other line. Thankfully I cut the right one. When it was finally in the boat, we couldn’t even high five each other – we were just shaking.”

This was Joy’s first season on the FLW Walleye Tour and he said he definitely plans to fish again in 2010. With 24 pounds, 8 ounces, he will return to his Bemidji, Minn., home with a first-place check worth $7,000. Incidentally, this was his first check of the season.

“First check of the year and it’s a good one.” 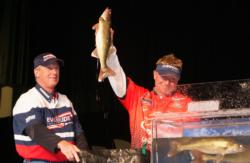 Coming in second for the co-anglers was Jerry Chwierut of Lake Villa, Ill. Like his pro partner, Scott Steil, Chwierut finished the opening round in second place and maintained that position after catching 16 pounds, 8 ounces on day three. Chwierut earned a purse of $10,600 thanks to $5,600 in boat and motor contingency awards.

Walleye fans might remember that Chwierut won the 2006 FLW Walleye Tour Championship on the Missouri River. That event was held downstream in Pierre, S.D. Chwierut began fishing walleye tournaments years ago at the urging of Joe McCartin. While prefishing together for a muskie tournament, McCartin finally convinced him to enter the world of walleyes. He’s been hooked ever since. 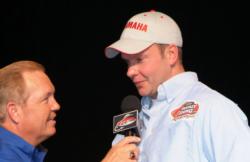 Fishing with pro Robert Crow on day three, Troy Vanecek of Omaha, Neb., caught 15 pounds, 2 ounces and earned a check worth $5,250. This was Vanecek’s first top-10 appearance; he finished third.

“The fish weren’t exactly cooperating, but the ones we did get were nice,” he said.

Co-angler William Drake of Horace, N.D., moved up once place with a 14-pound, 8-ounce catch and finished fourth. For his efforts, Drake earned a check worth $4,900. Of that $4,900, $2,100 came from contingencies. Drake fishes professionally in local tournaments on Devils Lake, his home body of water

“This is my third time drawing Dave and he’s never let me down,” Drake said. “I was hoping they weighed a little more, but it is what it is.”

Fifth place went to co-angler Dave Smith of Bemidji, Minn. Smith was the Co-angler of the Year in the Minnesota Division of the FLW Walleye League. Fishing with pro Carl Adams Jr. Friday, Smith boated five walleyes that weighed 14 pounds, 7 ounces, earning him a check for $2,100.

Rounding out the top 10 co-angler finalists at the FLW Walleye Tour Championship on the Missouri River: