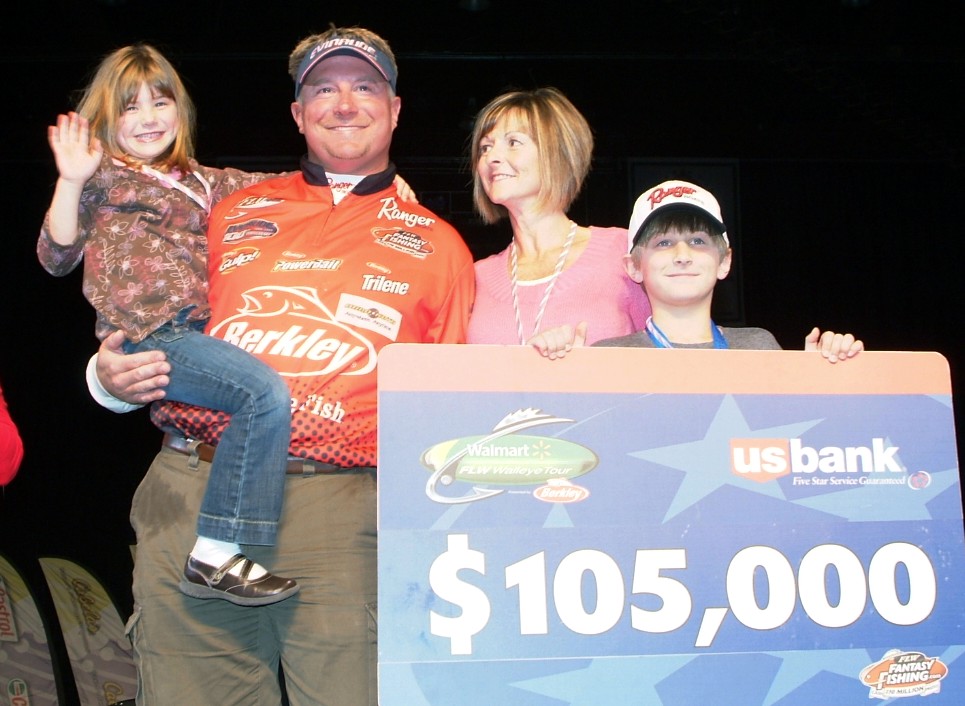 BISMARCK, N.D. – When his friend and travel partner Tony Renner weighed in an astonishing 24-pound, 8-ounce bag on day three, Scott Steil knew he would have his work cut out for him on the final day of the FLW Walleye Tour Championship. But even with an 8-pound hill to climb, he refused to believe he was fishing for second. And as it turned out, he was right.

Steil and Renner were both working the same area, a 400-yard stretch of the Missouri River known as Eckroth Corner, and they were both running the same program. They found the spot, which was located five miles north of the Hazelton Launch Ramp, together during practice.

“That place held the right fish,” Steil said. “The idea was to have a few spots within a few miles from 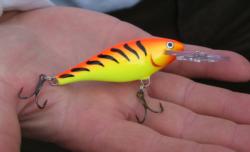 each other so that, if they weren’t there one day, we could easily adjust.”

Although they occasionally fished near Fort Rice, Eckroth was their bread and butter. On day three Renner got the big bites, and on day four it was Steil’s turn. With only two baits in the water in a no-cull tournament, the Richmond, Minn., pro caught an unthinkable 21-pound, 4-ounce stringer.

To catch his fish, Steil trolled crankbaits on leadcore line. At the end of his leadcore was a 10-foot leader of 14-pound Berkley Fireline Crystal. During the opening round, he used both Flicker Shads and Shad Raps, but during the final round, one particular crankbait stood out: a No. 5 Shad Rap in Orange Hot Tiger. Steil would present these baits in 13 to 15 feet of water over the top of a channel edge at 1.6 to 2.2 mph, depending on the current. While most anglers were fishing near the base of the water column, Steil purposely trolled 2 or 3 feet above the bottom.

“What I did different was pull my crankbaits higher,” explained the pro winner. “The fish were actually feeding on a school of crappies. I didn’t even know there were crappies in the system. But that’s how I got my big bites. As long as I kept my baits up, I wouldn’t get any of the smaller fish.” 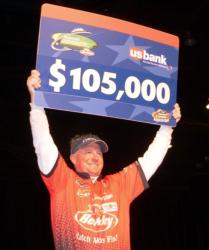 Earlier in the tournament, he was fishing deeper and trolling on the bottom. But between days two and three, the wind switched.

“When the wind changed, it blew all the water out of the system. When that happened the fish moved out of the deep troughs. That was the biggest thing for us – not getting stuck in the same rut of what you did the day before.”

Combined with his 16-pound, 8-ounce limit from day three, Steil finished with a final-round total of 37 pounds, 12 ounces. Consider that when Tommy Skarlis won the championship last year on the Missouri River he tallied 29 pounds, 7 ounces.

“Today the fish came in the right order, and obviously I kept the first five I caught. I was done at noon.”

For winning the FLW Walleye Tour Championship, his second Walleye Tour win, the 36-year-old claimed $105,000 – the largest payday in the sport of tournament walleye fishing. That payday pushed his career earnings with FLW Outdoors to just over $300,000.

“My first win was really sweet, but this is the big one, the championship. For Tony and I to go one-two is really special. I couldn’t be happier.” 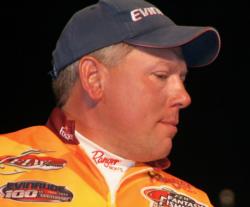 While Renner was the recipient of some great luck yesterday, his luck all but ran dry today. Fishing the same spot and using the same technique, the Hutchinson, Minn., pro managed only four fish weighing 10 pounds, 3 ounces. Renner took the disappointment in stride and for great reason. Along with Steil, he put together the pieces of the winning puzzle.

“We were on the program; we were on the best fish,” said Renner. “I’m pretty proud of myself, proud of us; we figured it out. I just needed one more bite.”

Renner finished with 34 pound, 11 ounces and earned $39,000 for his second-place finish. That’s his biggest check in five full years on the Walleye Tour. 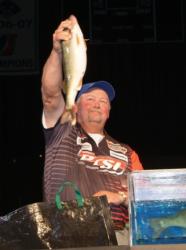 Dave Andersen was also fishing Eckroth Corner, which he parlayed into a two-day total of 30 pounds, 7 ounces and a third-place check worth $14,000. The Amery, Wis., pro had an incredibly consistent week – catching limits of 12-11, 15-13, 14-8 and 15-5. During prefishing, he had several Steil- and Renner-like days where he caught over 20 pounds.

“Today there was a strong bite,” said the former PWT Championship winner. “I was done at 10 this morning. I kept a 17-incher I wish I wouldn’t have, but that’s the way it goes. I caught him at the end of my second pass, and then things happened way too fast. It was my choice, so here we are.”

Andersen trolled in 14 to 16 feet of water with No. 5 and No. 7 Shad Raps. His two best colors were Glass Citrus and Hot Tiger.

“I had two goals (to make the cutoff and to win the tournament), and I achieved one of them. I’m satisfied with how I did. This is just a super place to fish. That’s why the championships keep coming back.”

Adams also fished Eckroth Corner, but he had some slight subtleties in his program.

“I was trying to run slower than everyone else,” said the Blackduck, Minn., native. “I was averaging fewer bites, but I was getting bigger fish.”

Adams also used different crankbaits. Instead of Flicker Shads or Shad Raps, he trolled Reef Runners. On three of his four lines, he would use dark colors. Overall, he said his best crankbait was a Pure Black Reef Runner.

When he took off this morning, he promised himself he would box the first five legal walleyes he caught.

“I was hoping that no little ones would bite, but they did. My biggest regret is keeping those two. I was done today at 1 p.m. Yesterday I had only one fish in the box at 1 p.m.” 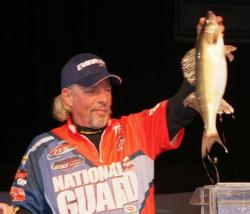 Completing an incredible 2008 season, Todd Riley earned $14,050 and finished in fifth place with a final-round weight of 28 pounds, 14 ounces. Before heading to Bismarck, Riley won the inaugural AIM Championship held on Lake Winnibigoshish in northern Minnesota.

Like the rest of the top five, Riley stayed close to the launch. Throughout the tournament he contemplated making the long run to the North Dakota-South Dakota border, but he never attempted it. After struggling yesterday, he had his limit and was done fishing today by 10 a.m.

“I pulled a lot of Flicker Shads and trolled some shallower sand bars in like 5 to 6 feet of water,” he said. “Other than that, it was the same as everyone else.”

On day one, the Amery, Wis., pro caught 24 pounds, 3 ounces, the second-heaviest limit of the entire championship. Last year he caught a similar bag, but it came from Upper Oahe.

“When I came here, I had a plan. I wanted two good days – a good first day and a good last day. I had two good days, maybe I should’ve hoped for three good days.”

Rounding out the top 10 pro finalists at the FLW Walleye Tour Championship on the Missouri River: