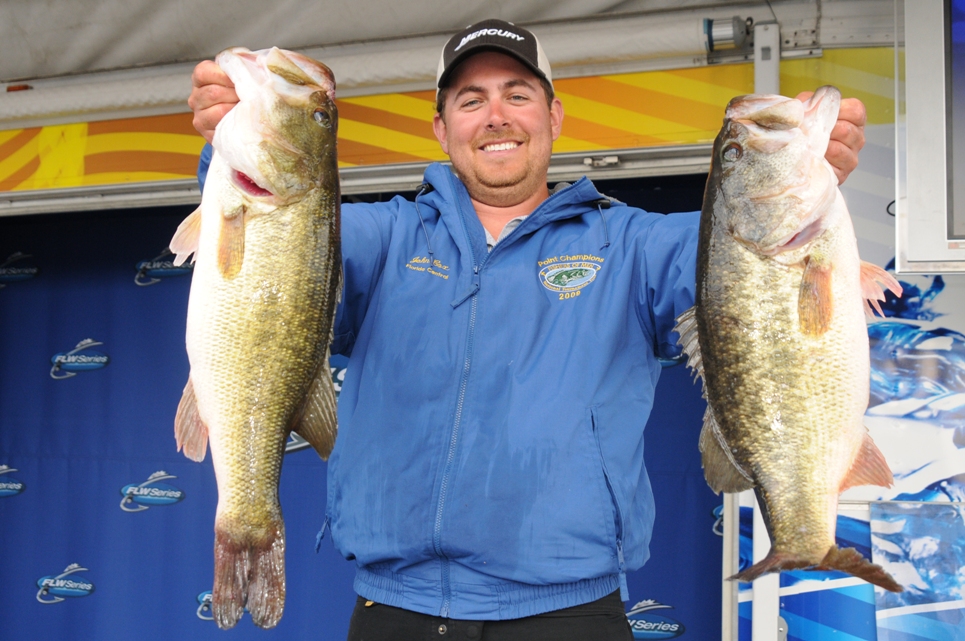 EUFAULA, Ala. – If you followed the first FLW Series Eastern of 2010 on Lake Okeechobee, you may recall that a young man by the name of John Cox of Debary, Fla., led that event for three days with huge daily limits of bass before stumbling on day four and finishing second.

Well, Cox is at it again at the second FLW Series Eastern on Lake Eufaula. Today he sacked up five bass for 26 pounds, 13 ounces on the opening day of the Eufaula event to take the early lead again.

But Cox is not the only one bringing in big limits. As predicted, Eufaula did not disappoint today, yielding big limit after big limit.

In all it was nearly a “20-20” day – 20 limits over 20 pounds – but it fell a few ounces short as 20th place actually stands at 19 pounds, 4 ounces. That’s still mighty impressive, though, especially considering the fifth place spot is 22 pounds, 13 ounces.

Great big Eufaula bass are flooding the banks, itching to spawn. But with the water level some 2- to 3-feet low and water temperatures still holding in the 55 degree range, they are not quite there yet. As a result, bass are holding just outside the best spawning flats in slightly deeper water, which is where Cox found his big catch today.

Cox’s favorite technique is sight-fishing, which is how he caught his bass at Okeechobee. He says he is not sight-fishing here – yet – but he may be by the end of the week.

“I think the water level has got them held off more than anything,” Cox said. “Where I’m fishing, I can see where they want to go, but they’re setting just outside those places right now. And it’s almost like they’re mad that they can’t get up there. The way they bite and strip drag is so powerful it’s unreal. It’s a whole lot of fun, I can tell you that.”

Cox was not bashful about his lure selection, either.

“I’m catching them on a spinnerbait and a worm,” he said. “They’re not real picky right now – get it around one and he’ll snatch your arm off.”

Cox had his limit by 10 a.m., which gave him time to explore other areas for the similar kind of pattern.

Sean Wieda of Florence, Ky., is in second place with 26 pounds, 1 ounce.

Wieda spent time on Eufaula pre-practicing when water temperatures were really cold. He found some great places, but when he returned for official practice, his deeper places had dried up, leading him to one conclusion.

“They moved shallow on me,” Wieda said. “I’m still fishing close to where I caught them when they were deep, but they have definitely moved up shallower. I’ve got about three places where I’m catching them, but more and more boats are starting to figure out how shallow the fish are. As the day wore on these places got a lot more pressured. I’m probably going to have to move to some other water tomorrow.”

Wieda’s primary two baits are a D&L jig and his own hand-poured “Wieda Bug,” which is creature bait of his own creation.

Hults moves to the front

As you follow the FLW Series this week, you’re going to read the Hults name a lot. The four Hults brothers, Alan, Chris, Matt and Paul, are all fanatical fishermen who have dominated the Co-angler Divisions of FLW Outdoors events and all are fishing this week.

Alan has won five FLW events as a co-angler in recent years, two of which were on Eufaula. Much to the relief of his brothers, Alan entered this event as pro and it’s starting to look like it does not matter which end of a boat these guys fish out of, they’re going to catch fish.

So how is Alan faring in his pro debut? Not too shabby at third place with a limit weighing 24 pounds, 1 ounce.

“I was a little nervous this morning,” Hults said. “Sitting there at takeoff, it’s intimidating when you look around at who you’re fishing against. But once I got out there, it’s just fishing, just like when I was in the back of the boat. In fact, I’m fishing the same lures and tactics that have always worked for me here.”

Mike Millsaps of Cartersville, Ga., is in fourth place with a limit weighing 23 pounds, 12 ounces.

“I was running up the lake and spun a hub,” he recounted. “So I was forced to pull over and just start fishing. It was an area I was somewhat familiar with, so I went to the best part of it and starting catching fish. Pretty soon a guy comes walking down the bank asking us how we’re doing. I told him I had spun a hub and he offered to ride all the way around to the put in ramp here, get my prop, and bring it back to me so I could get back.”

Fresh off a fourth place finish at the Table Rock FLW Tour event last week, Bryan Thrift wasted no time in getting to Lake Eufaula and taking some more names.

He weighed in a 22-pound, 13-ounce limit today for fifth place.

“I went to the best place I had this morning and caught a 6-1/2 and a 7 pretty quick, which got me going,” Thrift said. “After that I just started burning up the banks and caught three more good ones. I know the water is low, but it seems like the fish want to be up there anyway, so I’m just going to keep on burning the banks for bites.”

Rounding out the top-10 pros in the FLW Series Eastern Division after day one:

Hults fished with Pro Scott Montgomery of Eufaula, Ala., today.

“We fished out deep most of the day using plastics and jigs,” Hults said, “He let me borrow some of those Big Bite Baits and they worked pretty well.”

As for the unreal Hults’ family fishing mojo, Hults added the whole family just loves to fish and they fish as much as possible, working together during practice to figure things out.

Ranquist fished with pro Craig Taylor of Tallahassee, Fla., and said the best bite was early, sacking most of his weight before noon.

Wayne Hauser of Mooresville, N.C., and Kurtis Michaux of Clermont, Fla., are tied for third at 17 pounds, 12 ounces.

Jeff Cummins of Marion, Ohio and Dean Tucker of Hiawassee, Ga., are tied for fifth at 15 pounds, 1 ounce.

Rounding out the top-10 co-anglers in the FLW Series Eastern Division after day one:

Day two of the FLW Series on Lake Eufaula begins at 7 a.m. Thursday.