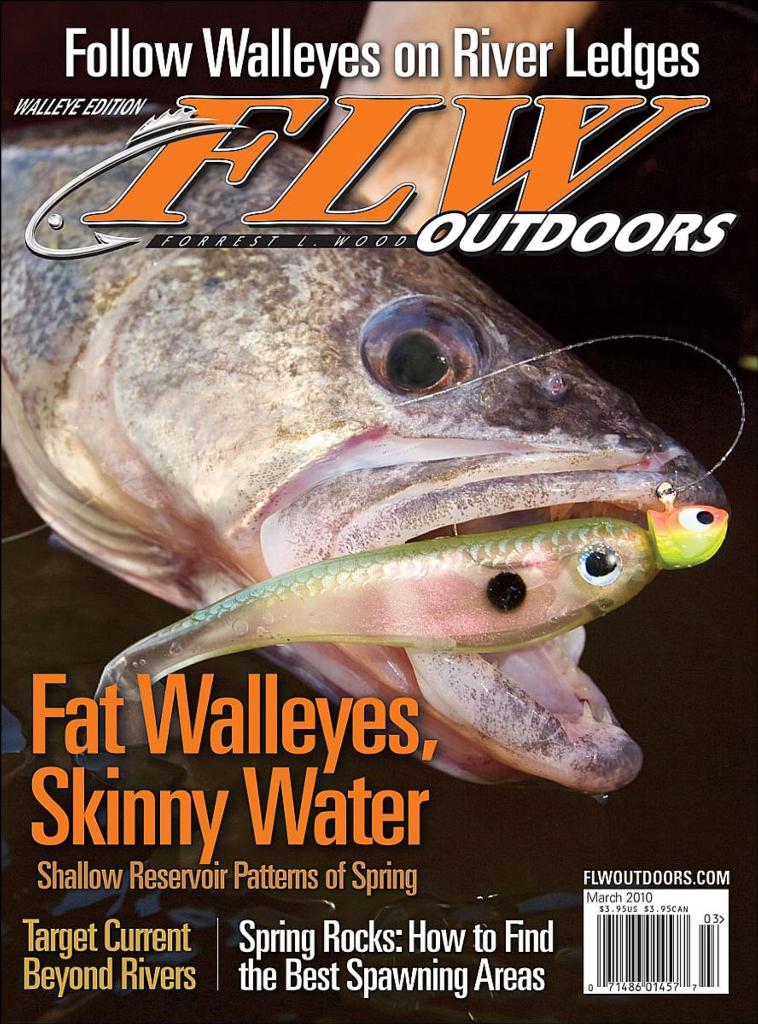 Editor’s note: This is just one article from a recent issue of FLW Outdoors Magazine, which publishes both a Bass Edition and a Walleye Edition. To learn more about the magazine and how to subscribe, click here.

Ice-fishing is fun and all, but by the end of February, you’re admittedly tired of walking on water and using stunted fishing rods. You’re craving a warm day, the smell of some outboard exhaust, some time watching your graph, pitching a jig to shallow water and feeling the thump of a giant walleye. You’re ready for spring.

But spring isn’t without its difficulties. Rain is often associated with those longer days and warmer weather. Lots of rain – rain that fills the creeks and streams, which in turn flow right into the big rivers so many enjoy fishing this time of year. Rather than savoring a cool and relaxing boat ride to your favorite spot, you’re dodging floating logs and trash. The current is ripping, and the water is muddy enough to make the brightest crankbait disappear just below the surface. With 2 feet of cold new water sitting on what was dry land a day before yesterday, those walleyes could be anywhere, right?

Hopefully you’re prepared for such a thing, however. High water is a part of springtime river fishing, and in some ways, it can work to an angler’s advantage. Unlike other adverse conditions, or even muddy water in a lake, high river water in the spring actually creates some unique fishing options that aren’t present when the water is low.

Walleyes spawn in skinny backwaters that could be inaccessible by boat if not for high water. Even if the fish aren’t spawning in the backwaters, they may use them as respite from the strong current closer to the main river. While the backwaters may be unproductive at other times of the year, they can be factories in spring.

Closer to the main river, before the current gets too strong, rising water creates an abundance of new current seams where walleyes will set up to ambush forage. At the same time, a rising river spills into trees along the shoreline and over wing dams, creating slack-water areas and washing an assortment of stuff from the bank into the water. This can bring both baitfish and walleyes into the shallows and creates a situation reminiscent of flipping for largemouths – there is no better time to pitch a jig and plastic.

It is difficult to talk about early spring river fishing without at least touching on the walleye spawn. Indeed, for a period of time in the spring, the spawning cycle in some way influences everything 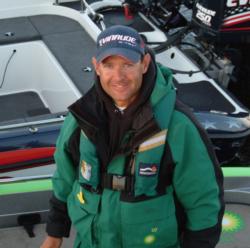 walleyes do. FLW Walleye Tour wins by pros Jason Przekurat and Jeff Ryan on the Mississippi River at Red Wing, Minn., are both prime examples.

Both tournaments took place in early May when the river was high, and in both cases, the anglers located “neck down” areas where walleyes, having spawned in backwaters, were traveling out of tributaries en route to the main river. The main river was high and fast, however, so the fish stopped in the tributaries in various staging areas. The anglers simply found those staging areas and thoroughly seined them, waiting for the fish to come to them.

Ryan’s 2006 catch set a tournament weight record at the time for the Mississippi River with 16 fish weighing 87 pounds, 4 ounces. Przekurat’s catch the following year broke that record with 18 fish weighing 89-15, although that record has since been broken again.

When Przekurat won that tournament, the Stevens Point, Wis., pro found his fish by finding something he always looks for during springtime high water: new current breaks near major backwater areas. When the water gets high, the breaks he would fish under a normal flow may disappear. Even if they are still there, they likely won’t be as productive.

“I start by looking at a map and circling areas where backwaters flow into the main river system, and then I check those areas for current breaks,” he said. “Look to see what the flow and depth are like, and also look for holes and contours that may hold fish. I may not do much fishing in them at all initially, though.”

At high water, finding current breaks can be as easy as looking at the surface of the water for swirling indicators of eddies. Islands, riprap points, thick hardwoods and other large obstructions that were once above water can all break the current flow. Even roadbeds and other man-made structure indicated on maps can come into play.

The key, as Ryan of Lake View, Iowa, agreed, is using backwater areas as starting points.

“When I first begin to fish a high-river situation, I’m going to search for slack-water areas,” Ryan said. “Depending on how early you’re fishing a river in the spring, the walleye spawn can be a big part 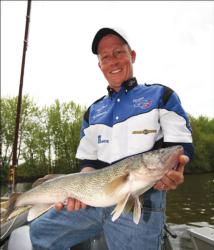 of where you begin your search. Spawning fish are going to be in shallower water, particularly backwaters that have better spawning habitat and water quality.”

Rivers like the Mississippi are laced with miles of backwater, even more when the river is high. But not all backwaters are the same when it comes to walleye spawning habitat, and that can help narrow your search.

“First and foremost, a good spawning area must have easy access to the main river,” Przekurat said. “Some of them are narrow and skinny, and those probably aren’t going to hold many fish. You’re looking for major tributaries and creeks. Many people think walleyes must have a hard bottom in order to spawn, but I don’t think that is always the case. I think they’ll spawn on anything their eggs will stick to, including emerging weeds, wood or cattails.”

Walleyes traveling up and down tributaries, whether trying to escape heavy current or spawning, will often keep right on traveling through featureless areas until they arrive at a spot where they can stop, rest and feed before moving. When Ryan won the 2006 Mississippi River tournament, that spot was in the Vermillion River below a railroad trestle. The pilings of the trestle created eddies and current breaks, but the area also had several features walleyes found attractive.

“Once they’re spawned out and moving back down the system, you can definitely find a spot where they’re passing through and catch them,” Ryan said. “When I won that tournament, the spot I was on included several deep holes and submerged timber, and those big females were coming out of the backwater and holding right there.”

Przekurat’s spot in 2007 was similar. Both anglers reported losing numerous rigs to tangles of wood cover, but those frustrations were easily forgotten since “clean” casts often ended with a trophy-class fish on the line.

Various hands-on, live-bait presentations are tough to beat in a situation like this. Although Przekurat

admittedly caught most of his tournament-winning fish on a jig (more on that presentation shortly), he kept two rods three-way rigged with willow cats in the water at all times. Ryan also used three-way rigs and bottom bouncers rigged with floating jigheads and tipped with night crawlers, leeches and willow cats.

The bait choice or presentation isn’t as important to note here as the theory behind the presentations. With fish continually moving in and out of those areas, it paid to have something stationary in the water at all times. Experimenting with different types of bait and stationary presentations simply fine-tuned the program.

Even if you took the direct impact of the spawning migration out of the high-water equation, which is unlikely, the fish will still be seeking refuge from strong current flows in the main river. That refuge still may be a chute leading to a backwater area. One of the most basic rules of fishing high water is to move closer to the shoreline – midriver stuff is probably just too deep, too fast and too turbid. Runoff and high water certainly will wash forage, such as night crawlers, into the water – in addition to washing little stuff that baitfish like. That being the case, calm areas next to the bank, even miniscule ones behind small rocks and tiny points, offer relief for baitfish. We all know what walleyes do to baitfish, especially when they are corralled in a tight little area such as this.

“If you’ve been catching fish at the mouth of Creek X, for example, and then your water rises 4 feet, the baitfish aren’t going to stay there,” Przekurat said. “They’re going to find another slack-water area to stage. The same tributaries and muddy backwaters – where walleyes travel to spawn anyway – are often the first spots they go.”

A shallow feeding situation like this just begs for a pitched jig.

“I’ve said it time and again – my No. 1 presentation for a high, muddy river is a jig and plastic,” Przekurat said. “You can cover water with that, and it has a big profile that is different from a jig and minnow.

“The action should be fast and aggressive. I’ll usually upsize my jighead, depending on how muddy the water is, and use some wild colors. Black and purple are my go-to colors. I carry all kinds of plastics, probably as many as some bass guys, but I’ll start with something in the 4-inch range most of the time.” 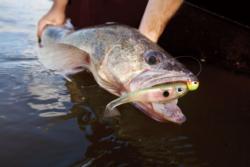 So you have done your homework and found a big bunch of walleyes staging in a tributary, right where they are supposed to be under high-water conditions. Maybe they are on their way out of a backwater from spawning, or maybe they are just hanging out until the floodwaters recede a bit. Whatever the case, don’t assume they are going to be there tomorrow. If there is one thing to remember about rivers, it is they change. Water that continues rising or begins falling out will, as sure as the sun rises, reposition those fish you have been catching. Fortunately, so long as the change isn’t a drastic one, they rarely go far.

Above all, it is important to be observant and aware of changing water levels. If you have access to a computer, this is a little easier. Visit the National Weather Service Web site at weather.gov and click on the Observations and Forecast tabs. If you don’t have Internet access but are fishing the same general area for a few days, simply make a point of reference to check each morning. Maybe use a permanent marker to make a line on a boat dock at the launch ramp or on a log sticking out of the river.

“When I first started tournament fishing, that was one concept I really failed to understand,” Przekurat said. “But a water fluctuation of just 3 inches may move fish that were in 3 feet of water down to 8 feet. They can sense that water dropping, and they’ll quickly move out of there. It is very important to keep track of water levels in the spring.”

When you finally are able to run the boat in open water for the first time since last fall, high and muddy water may be intimidating. It won’t be if you understand walleye seasonal movements at this time of year and how those movements are affected by heavy current. Have the patience and confidence to find a variety of likely slack-water areas, and experiencing great fishing early in the season is a distinct possibility.