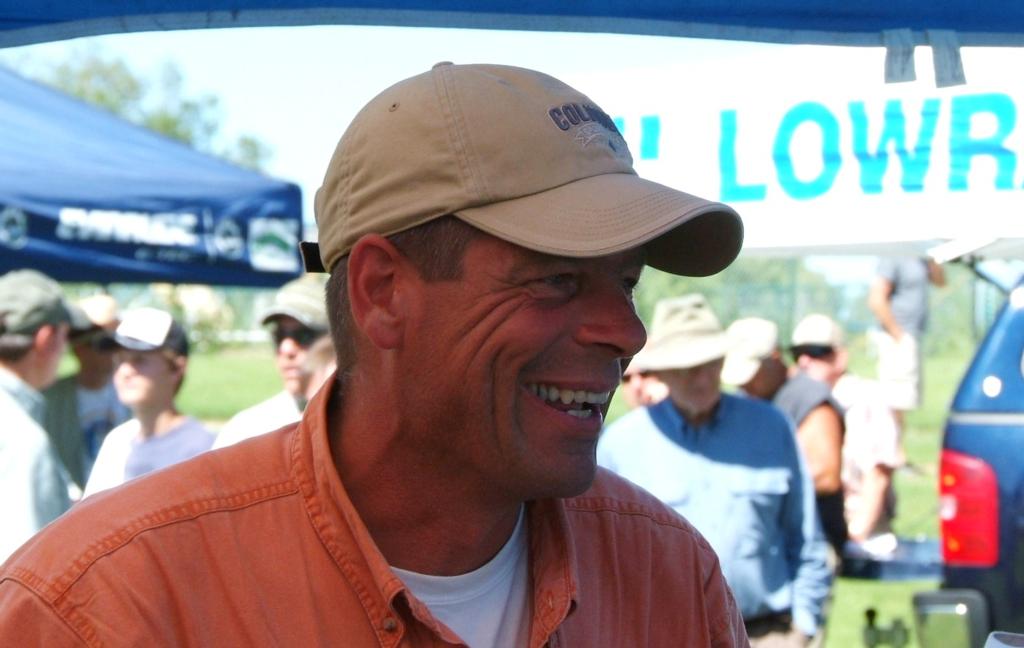 OSHKOSH, Wis. – If there is one hard and fast rule in fishing, it’s that the bite is always the worst the day following a major front. And the Fox Valley area received a blistering storm Wednesday evening that essentially shut down any walleye activity on day one of the FLW Walleye Tour Eastern Division finale.

Winnebago Thursday was reminiscent of 2005 on Bull Shoals Lake, the toughest event in FLW Walleye Tour history. But one local pro was able to solve the puzzle and bring in a limit. A former area guide, Brett Wilkens knew the bite would turn sour after nearly 3 inches of rain and continuous lightning.

“I really only had a day and a half of prefishing,” said Wilkens. “And I never fished any of the areas I went to today. Once the weather came through, I knew it was going to be tough; there was no doubt 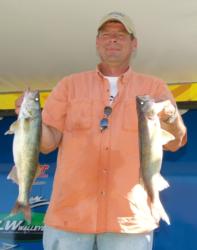 about it. I told my partner it was going to be a slow and to be very cautious with every bite we get. I basically had a few key areas in mind. Most of them didn’t pan out, but two did.”

Wilkens and co-angler partner Bob Miller caught six walleyes on the day, their best five weighing 11 pounds, 11 ounces. All those fish, which were between 17 and 19 inches in length, came from two small main-lake (Winnebago) areas.

“We were jigging and slip bobbering with leeches and crawlers in shallow water,” added Wilkens. “We missed a few bites but we also caught a few sheephead and a few smallmouths so we’re not sure they were walleyes.”

Wisconsin laws allows for two lines per angler. So one would assume Wilkens and Miller each worked a slip bobber and a jig. But that was not the case. Wilkens said he’s fishing such specific structure that each angler can really only effectively use one rod at a time.

Even with the awful conditions, the Kiel, Wis., native was surprised to see the majority of the field struggle as bad as they did. Wilkins caught the only limit of the day and over half the field took a zero. He believes the bite is going to continue to be tough, but that another double-digit weight is possible tomorrow.

“Coming into this tournament, I really wanted to focus on big fish. That was my goal. But the way things are now, I just want to be consistent. If the wind settles down, I think it will help. I have a lot of spots I didn’t get to fish today; it was just too rough. If at all possible, we’ll be trying some of those little spots tomorrow. But we’re dealing with dirty water, so it makes it pretty tough.”

With four fish weighing 8 pounds, 8 ounces, pro Paul Meleen had a banner day on Winnebago. And if 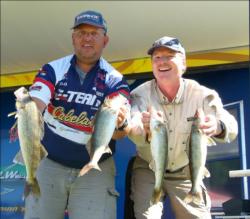 not for two missed fish, it could have been significantly better.

“We lost a 24-incher and another small keeper,” Meleen explained. “Fishing is fishing but we should have done much better. We had that big one on the surface with a chance to net it.”

Unlike Wilkens, Meleen is spending his time in the Fox and Wolf rivers. Using his side-imaging electronics, the Isle, Minn., pro is picking out tiny little one-boat humps. Once he finds what he’s looking for, he uses a three-pronged approach of jigging, live-bait rigging and cranking. With a strong current and a stiff wind Thursday, the fishing was exhausting to say the least.

Meleen also reported catching several giant bluegills in his prime areas. He’s not sure if the walleyes are feeding on the bluegills, but it’s an interesting side note nonetheless.

Meleen thinks the walleye bite will recover if the weather improves.

“If it stabilizes I think I can get five tomorrow.” 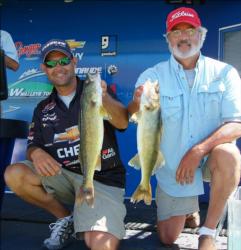 “Our best spot we had going was pretty tore up,” he said. “So I had to scramble and go to Plan B. That’s where we caught those two.”

Przekurat plans to return to his primary area Friday.

“It’s had a day to recover and when they’re there, it’s easy. So I’m going to start there and give it a couple hours. If I can get five bites in my Plan A spot it’s a guaranteed 12-pound limit. If I can just get three bites, I should be right where I want to be.”

Rounding out the top 10 pros on day one on Lake Winnebago: 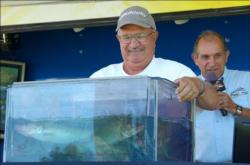 Miller, an Oshkosh, Wis., resident is in the lead in the Co-angler Division after catching 11 pounds, 11 ounces on day one. Paired with Wilkens, the two jigged and employed slip bobbers over small pieces of main-lake structure.

Rounding out the top five co-anglers on day one on Lake Winnebago:

Day two of FLW Walleye Tour competition on Lake Winnebago begins as the field of takes off from Pioneer Resort Marina located at 1000 Pioneer Drive in Oshkosh. Friday’s weigh in will also be held at the marina, beginning at 3 p.m.