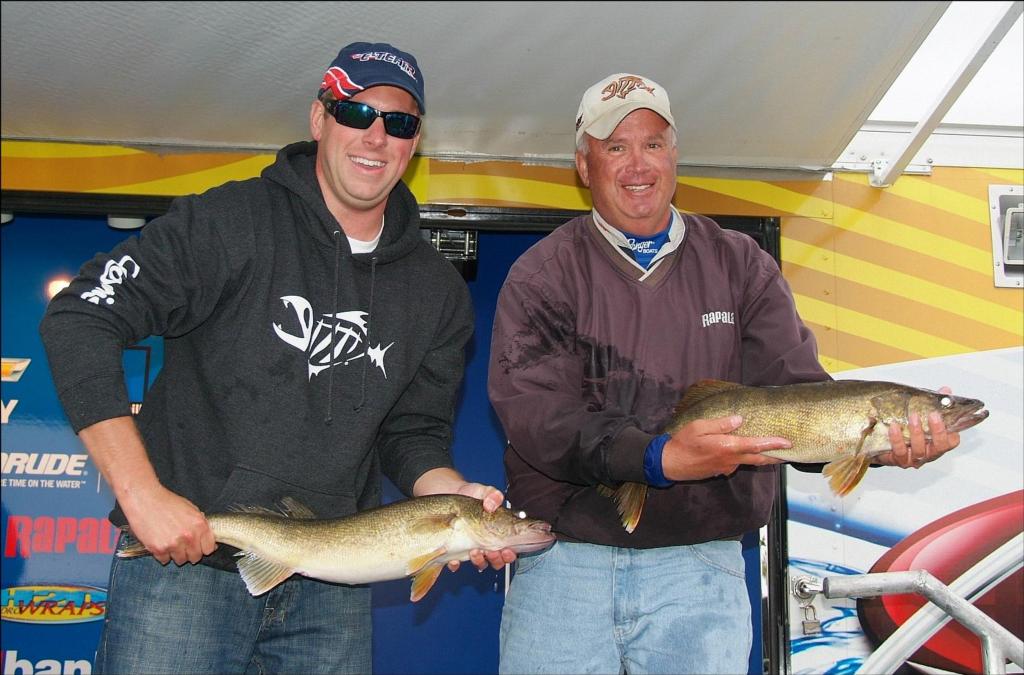 WALKER, Minn. – The rumors of a slow walleye bite on Leech Lake have been greatly exaggerated. Within 15 minutes of the scale opening at the 2010 FLW Walleye Tour Championship three stringers over 13 pounds were recorded. By the end of the day-one weigh-in, that number doubled to six.

The heaviest sack came from veteran pro Kevin Merrill of Pierre, S.D. While most of the 40-boat field struggled to catch one keeper over 26 inches, Merrill caught two. Both fish came from the same location, an area he didn’t fish all that much during practice.

“I had a poor prefish; I bet I caught only eight or 10 in three and a half days,” said Merrill. “But on the last morning I went up to an area and immediately caught an 18, a 14 and I had a few other bites where they chewed up the bait pretty good. So I went there this morning and there were already five or six guys there. But it still worked – just about everyone was wailing on them.”

The bite was best early, but Merrill decided to stay in the area – occasionally moving around to certain edges and points. His two overs measured 26 1/4 and 26 1/8 and his unders were all 17s and 16s. He estimated he caught 20 fish total on the day and finished with a total weight of 16 pounds, 5 ounces.

“What a day. I’ve been doing this for 10 years and it’s just a good feeling to be leading a championship. I can’t really describe it.”

Merrill said that because other boats are present, he wants to keep most of his presentation details quiet for now. He did admit that he was both rigging and jigging.

“My co-angler caught our biggest fish and he caught a few of the unders too so he deserves a lot of credit.”

Merrill has a keen eye on tomorrow’s forecast, which is calling for high winds and up to 4 inches of rain.

“Our spot isn’t too far from the launch, so hopefully if the weather is bad that will be a good thing and we won’t have to make a long run tomorrow. I will try and catch my five, but I may not get my overs. I do think there are enough unders that we can get our limit.” 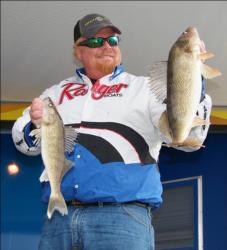 It’s no surprise to see Max, Minn., pro Brian Brosdahl near the top of the leaderboard on Leech Lake. Known as Bro, Brosdahl guides on the area lakes and finished third last year at the June qualifier. Today he planned on hitting eight spots spanning 17 miles of the lake but he only reached five of them.

“I was really only expecting one or two fish from our first spot, but we ended up getting pretty much all of our fish there. At 10 minutes to 8 (a.m.) we had our five. But even after we left that spot we caught fish everywhere we went.”

Brosdahl said he used a variety of presentations including chubs, leeches and a Northland Live Forage Minnow Spoon. The spoon he uses specifically for the unders.

“They ate everything today. My partner said he’s never caught so many fish and never thrown so many fish back. I know we caught over 40 today.”

Bro, a heavy favorite, is doing his best to manage some of his better spots in a four-day tournament.

“I’m glad everybody is catching fish, I really am. I want everyone to come up here and have fun. But I also want to beat them too.”

After an 8-ounce penalty for a dead fish, Bro’s official weight was 14 pounds, 1 ounce. 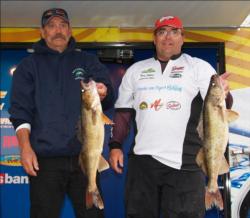 Also with 14-1 was Lake City, Minn., pro Terry Filkins. While Bro achieved his weight on five walleyes, Filkins did so with only four.

“We absolutely rifled through them,” Filkins said. “We caught five fish that were just under 26 inches (and had to go back) and of course we caught the two overs. I bet we caught 35 fish between 22 and 26 inches. We just couldn’t get one more small one.”

The first two fish Filkins put in the box were his overs. His next was a 16-incher and then he went three hours without another keeper. He left his primary area at 1:30 p.m. and went to a nearby small-fish spot but it didn’t produce. He eventually returned to the area he started on and caught his final under with 20 minutes left in the day.

“We had the fifth fish on too. My co-angler was reeling it and it just came unbuttoned right as I was getting the net ready.”

“I’m rigging and there’s a certain type of live bait I really want. I almost ran out today.” 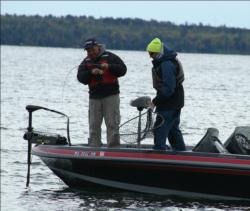 In fourth place is Colgate, Wis., pro Pat Byle. If not for three dead-fish penalties, Byle would be sitting in second. As it stands, he’s fourth with a total weight of 13 pounds, 14 ounces.

“I am absolutely thrilled,” Byle said of his day-one performance. “I have one spot and its absolutely incredible how many big fish are on it. I’ve never seen anything like it.”

The spot Byle referred to is solely for big fish. Today it produced four overs – the biggest measuring 27 1/2 inches. He caught his three unders in a different area. What he’d like to do is find a spot with bigger unders as his today were barely legal.

“Things can change but right now I like where I’m at. I can’t say for sure that I’ll get the overs tomorrow but I am pretty confident.” 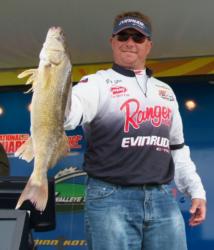 “If I get one over and a limit tomorrow I’ll be fine,” Steil said.

Steil said he purposely stayed off some of his better stuff in practice. He didn’t want to pound the fish for one and he definitely didn’t want to give away locations.

“It was nice to actually sit on a spot and see what you can grind out. When you’re hopping around, you forget how much fun it is to just sit and fish. I’m happy with that (13-6) but I was hoping for unders between 17 and 18 inches.”

Steil said he fished the main lake and used a combination of jigs and rigs.

Rounding out the top 10 pros on day one on Leech Lake:

Fishing with Merrill on day one, Hiller registered a limit worth 16-5. Merrill mentioned that Hiller was a major contributor as he caught the team’s biggest fish, a fat 26 1/4-incher.

“We had quite the flurry early in the morning,” Hiller said. “It was a blast.”

Rounding out the top five co-anglers on day one on Leech Lake:

Day two of the FLW Walleye Tour Championship on Leech Lake begins as the field takes off from Walker City Park at 7:30 a.m. Central time. Thursday’s weigh in will also be held at the park, beginning at 4 p.m.