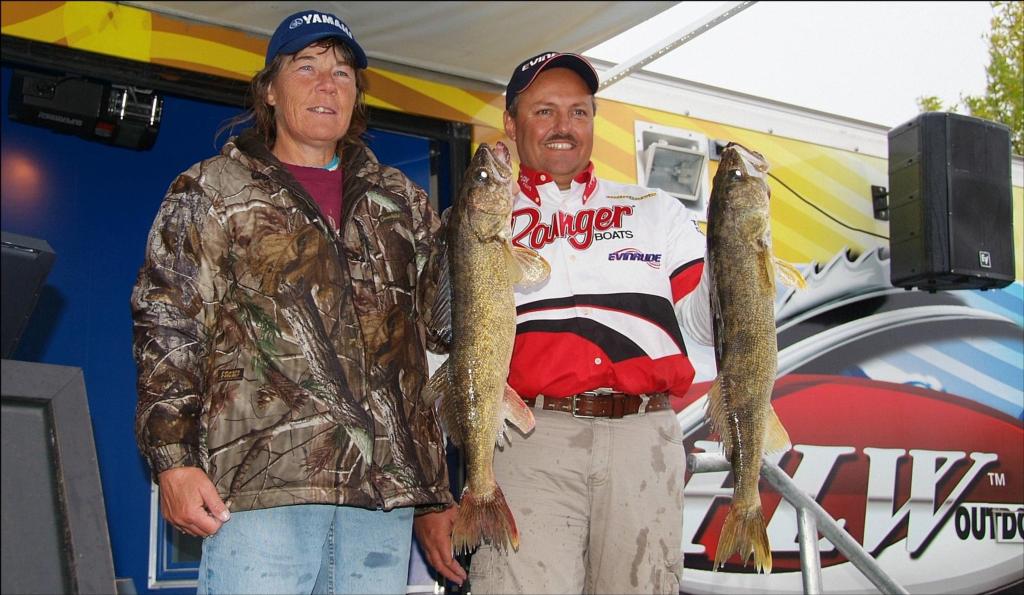 WALKER, Minn. – In a slot tournament like the 2010 FLW Walleye Tour Championship, getting your overs each day is crucial. And although it’s a tricky task, pro Pat Byle is making it look easy. By 9 a.m. Thursday, Byle had two fish over 26 inches in his Ranger livewell and was working on getting three unders.

Byle eventually got his unders, but they weren’t exactly the fish he sought. He finished the day with a 16-pound, 11-ounce limit and a two-day total of 30 pounds, 9 ounces.

“The under fish are still a problem,” he said. “All I can catch are 15 1/2s instead of 16s and 17s. Other than that, things are going really, really well. To jump into the lead, I guess I am a little surprised by that.”

Byle’s big-fish spot, located in Walker Bay, is absolutely loaded. He described it as two small humps the size of a living room on a deep flat. To catch his fish over these humps, Byle is rigging with redtail chubs.

“They are just stacked in that spot. But I am really worried about the forecast. The wind is supposed to blow over 20 mph from the northwest. That spot is very exposed to a north wind – it’s like a funnel. I’ll try it first thing with a couple drift socks and see what I can do, but it could be tough.”

Byle had problems feeling his bites in today’s easterly wind. To rectify the situation, he’d keep a keen eye out for the slightest curve in his rod. He’d then feed line to stay ahead of the fish and eventually come up with a sweeping hook set.

“I have other spots in Walker Bay, but none of them are protected from a northwest wind. I may have to come up with an alternative game plan. If I can just scrounge up one over tomorrow, I think I’ll be able to do some damage on Saturday. I can almost guarantee an over Saturday. Tomorrow is the wildcard with that wind.” 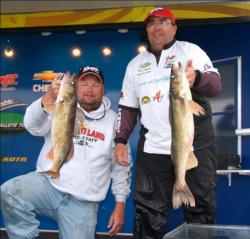 After being locked in a tie for second place on day one, Terry Filkins overtook sole possession Thursday with three fish weighing 14 pounds, 7 ounces. Filkins finished the opening round with a total weight of 28 pounds, 8 ounces. Two of those three walleyes were overs, the biggest measuring 29 1/2 inches. Unofficially, it’s the biggest fish of the tournament thus far.

“We caught 35 fish yesterday and only six today, so it was definitely slower,” Filkins said. “But we got our overs, and that’s the most important thing. I knew it was going to be won with overs, so that’s what we’re going after.”

It’s no secret that Filkins is fishing a community hole. Yesterday there were five boats on it, and today that number increased to nine. With the added traffic, Filkins said boat control was much more difficult. In addition, the pressure drove the fish deeper.

“I left the area at about 11 a.m. after getting my two overs. I went to my under spot in Agency Bay, but I couldn’t get them going. So I came back to my primary spot at 2 p.m., but I wasn’t able to get anything else.”

After weigh-in, the Lake City, Minn., native revealed a little more about his pattern.

“I’m rigging two points with a sand flat in between. On one point there are weeds, and on the other it’s rock. The deepest water I fish is 35 feet and the shallowest is 22 feet. I’ll keep bead color to myself though. A lot of guys are running plain hooks, but I’ve found there’s a certain color bead that’s working.” 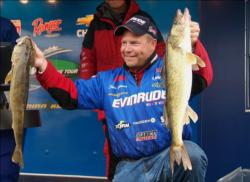 “I’m excited, but I’m also kind of surprised this many overs are being caught,” the 2009 Angler of the Year said. “With only four fish each of the next two days, I have my work cut out for me if I want to catch the leader. But the guys behind me will have a tougher time catching me too.”

Gilman is primarily rigging in both Walker Bay and the main lake. With three unders in the livewell at 10:30 this morning, he moved to one of his big-fish spots. Within the next hour, he had both of his overs in the boat.

“With the way the bite has been, I now think getting an over each of the last two days is possible. Ideally, I’d like to come in with 9 or 10 pounds tomorrow, and I think that’s doable.” 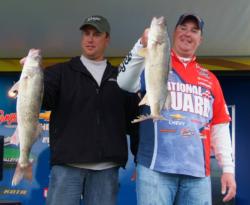 Rising from 13th to fourth place is National Guard pro Mark Courts. The Harris, Minn., native caught a 16-pound, 4-ounce limit that pushed his total weight to 23 pounds, 10 ounces. Courts liked the blustery weather today and wants more of it on his spot tomorrow.

“The fish are there,” he said. “The water color is perfect; everything is just right.”

Courts is jigging two main-lake spots in water 3 to 6 feet deep. That’s notable, considering many of the other top 10 pros are fishing in water deeper than 30 feet.

“I’m confident because I pretty much have these to myself. And I don’t think some of these other spots are going to hold up for four days.”

At the halfway point in the tournament, his two-day total sits at 21 pounds, 13 ounces.

Rounding out the top 10 pros who made the cutoff after day two:

“The weather is not quite what I hoped it would be, but we have done it so far,” said Van Cleve, who won the Western Division season opener on the Mississippi River. “The good thing is when you are leading, you get to fish with the top pro, so tomorrow should be fun.”

Rounding out the top 10 co-anglers who made the cutoff after day two:

Day three of the FLW Walleye Tour Championship on Leech Lake begins as the top 10 pros and top 10 co-anglers take off from Walker City Park at 7:30 a.m. Central time. Friday’s weigh in will be held at the Northern Lights Casino, beginning at 4 p.m.