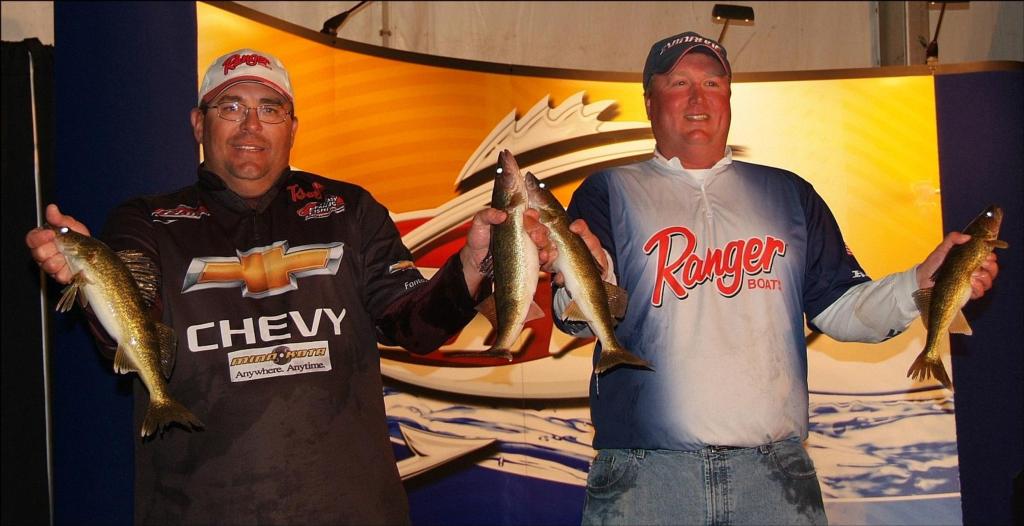 WALKER, Minn. – Day three of the FLW Walleye Tour Championship on Leech Lake did not start as planned for pro Terry Filkins. After a bumpy ride in stiff northwest winds, Filkins arrived at Kabekona, his primary spot, shortly after 7:30 a.m. But when he dropped his trolling motor in the water and stepped on the pedal his prop failed to spin.

Filkins was frustrated, but he didn’t panic – instead opting to back troll with his kicker engine. The situation wasn’t ideal as Filkins was trying to stay as vertical with his rigging presentation as possible. At 11 a.m. he tried the trolling motor again and miraculously it worked. And as soon as he got back on the bow, he started catching fish.

“I feel so much more comfortable fishing from the front,” Filkins explained. “With the main engine I was surging too much and with the bow I was able to really control what my line was doing. And taking waves off the top of your motor is not fun.”

While the two other boats in his area struggled, Filkins was pleased with his 6-pound, 13-ounce stringer despite not getting an over.

“I went and grinded it out all day. The first two days I left my spot to chase unders (14- to 18-inch fish) and I told myself I was not going to do that today. I’m a little surprised I didn’t get an over, because it’s a big-fish spot, but I knew it was going to be a grind. Earlier in the week, the fish were a foot or a foot and a half off the bottom. Today, they were pinned to the bottom.”

Filkins is rigging with a 3/4-ounce Wing It slip sinker and redtail chubs. With one day of competition remaining, the Lake City, Minn., pro has a 5-ounce lead and a three-day total of 35 pounds, 5 ounces.

“It’s exciting, but I’m a little nervous. My wife is here; she came up and gave me a hug and I teared up just a bit.” 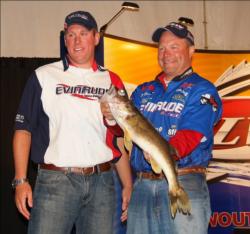 Chris Gilman started the day in third place and ended it in second place after catching a 9-pound, 4-ounce limit. The 2009 Angler of the Year is breathing down Filkins’ neck with a total weight of 35 pounds even.

“I got my over right away,” said Gilman, who bounces between Walker Bay and the main lake. “That took the pressure off but it was still a struggle.”

Despite being one of the best walleye pros in the game, Gilman has never won a tour-level championship in 21 tries.

“Maybe I’m due. I definitely feel like I need an over. If I don’t get an over, I don’t have a chance tomorrow.”

The translation is that Gilman will start day four rigging on his big-fish spots in Walker Bay. 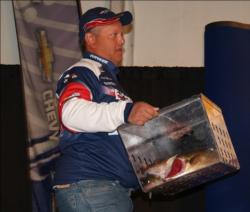 With only three fish, Paul Meleen registered the heaviest stringer of the day and climbed from sixth to third. Meleen had been spending some time in the Kabekona area, but he ditched that in favor of the main lake today.

“That’s the roughest I’ve ever seen Leech Lake,” Meleen said. “It was truly a day where you test your skill set and I’m pleased with my performance.”

That 10-pound, 9-ounce performance was anchored by a 28 3/4-incher kicker, the third over Meleen caught Friday.

“I just can’t get the little ones. I think I’ll get my over tomorrow, which means they’ll need an over to beat me.”

Meleen is sampling nearly 40 spots in a day. Most are rock humps on the east side of the lake. On the shallow ones he jigs and over the deep ones he rigs.

“I lost three unders today that would have put me right up there. I’m not in the driver’s seat and that frustrates me. But if the wind blows, I got a crack at it.” 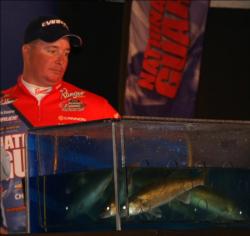 Despite not catching a keeper walleye Friday, day-two leader Pat Byle is still in the top five with a total weight of 30 pounds, 9 ounces. Byle was intent this morning on getting an over, so he spent the majority of the day unsuccessfully battling the waves in Walker Bay.

Mark Courts managed a limit, but with no overs, he slipped from fourth to fifth. His day-three stringer weighed 6 pounds, 1 ounce, pushing his three-day total to 29 pounds, 11 ounces. While Byle is deep rigging, Courts is jigging in shallow water.

“We had one that nearly measured 26 inches,” Courts said. “That’s heartbreaking, but the National Guard boat worked its butt off.”

Rounding out the top 10 pros after day three on Leech Lake:

The final day of the FLW Walleye Tour Championship begins as the top 10 pros take off from Walker City Park at 7:30 a.m. Central time Saturday. The winning pro will be determined by the heaviest total weight from all four days of competition.