Dempsey’s day on the Bay 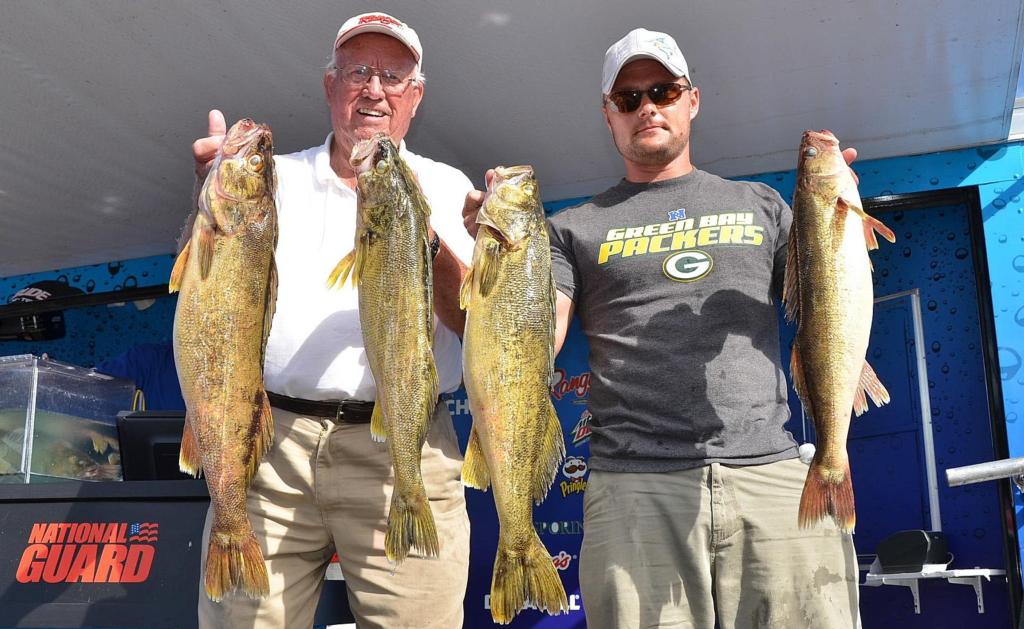 OCONTO, Wis. – A late alewife spawn couple with unusually high temperatures led to an inconsistent bite on day one of the National Guard FLW Walleye Tour event on Green Bay. Most were surprised to see only three weights in the 30s. But it was even more surprising to see a Tour newbie take the early lead.

While Ryan Dempsey is fishing his first Walleye Tour event, he’s no stranger to Green Bay. Dempsey guides part time with GreenBayFishingCharters.com. All total, he spends three or four days per week on the Bay. He put that local knowledge to use Thursday, catching a five-fish limit that weighed 30 pounds, 10 ounces.

“We got two big bites early, and then we smacked a big double around noon,” said the Oneida, Wis., native. “Our fifth fish (a 22-incher) came right from out front here at the end of the day. Most importantly, we never lost a fish.”

Dempsey is trolling spinners like most of the field, but he’s not fishing near Geano’s Reef like most. Where exactly he is fishing is a secret Dempsey is trying to keep at this point.

“I’m really surprised to be leading; I would have thought the weights would be heavier.”

While Dempsey was pleased with his performance, he realizes he has a lot of work left to do. He thinks the bite will improve tomorrow with decreasing wind as making turns over tight schools of fish will be easier.

“I’m going to have to come up with what I had today or even bigger. And to be honest, my practice wasn’t that good. We just got a couple bites each day.” 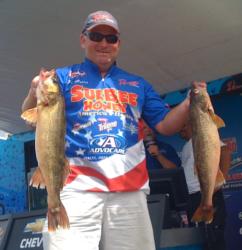 One ounce behind Dempsey is Jefferson, S.D., pro Gil Mollet. Mollet weighed in at 1:45 p.m. as FLW Outdoors opened the scale early in the hot weather.

“On our first pass we caught two nice fish,” he said. “Then the bite slowed a bit but we caught one here and there. We boxed our sixth and final fish at 11 a.m. I was surprised to catch them that quick. I was expecting a grind.”

Mollet also admitted he’s trolling spinners. But he believes certain subtleties are giving him an edge.

“I think we got a little something going that others aren’t doing. It’s been working all week. You never really know, because this is fishing, but I believe the pattern will go again tomorrow.”

Huskey sticks to the plan for third

Like Dempsey, Marianne Huskey is fishing her first FLW Walleye Tour event. But she also has significant open-water experience. For the last 12 years, she lived in Michigan’s Upper Peninsula 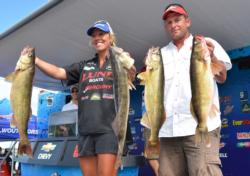 before moving Shawano, Wis., this past year. Today on Green Bay she caught a limit worth 30 pounds, 5 ounces and third place.

“We caught our first fish in five minutes and we had three in 45 minutes,” she said. “A half hour later came No. 4, but it was 22 inches so we threw it back. Then we went the next two hours without a fish and I was thinking `Dear God what have I done?'”

Despite her anxiety, it ended up being the right decision as Huskey was able to cobble together a few more nice keepers in the mid 20s.

“I’m happy, because I thought we only had 25 pounds. But this is day one and you can’t win a tournament on day one.”

At last year’s AIM event, Huskey ran 60 miles north to fish water she was more comfortable with. Today, she chose to stay relatively close and ran south. At times, she had thoughts of fleeing, but sticking to the plan proved fruitful. 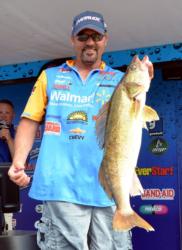 “I’ve been fishing the Bay pretty hard for the past 2 1/2 weeks,” Arnoldussen said. “The bite started out great but everyday has gotten progressively worse.”

Coming into today, Arnoldussen was ready to play it conservative and put 21s and 22s in the box in order to make the year-end championship.

“It ended up that they came in the right order and I didn’t have to make any tough decisions.”

The order was right, but they didn’t come early as the 2010 Lake Erie champion didn’t have a fish at 11 a.m. He then moved to deeper water and immediately coaxed a double. From there, the bite picked up dramatically.

“I only had one other person near me and that was Tom (Keenan). If we can come in tomorrow with 25 to 28 pounds we should have a good chance because we have the water to ourselves.”

Like Mollet, Gary Parsons weighed in at approximately 1:45 p.m. And coincidentally the two fished within sight of each other for much of the day. While Mollet cracked the 30-pound mark, Parsons weighed 29 pounds even, good enough for fifth place in the Pro Division.

“The bite is getting tougher and tougher, but today I sat down on the right area, the right pod,” said the Glidden, Wis., native. “This is kind of a big trollathon, but I’m running a little bit of a different program.”

Rounding out the top 10 pros on day one on Green Bay:

Boyd Strissel, an 11-year veteran of the FLW Walleye Tour, is in the lead after catching 30 pounds, 10 ounces on day one. Strissel was paired with Dempsey and Strissel’s Tour-level experience made for a good match with Dempsey’s home-lake experience.

“It was a great day; he’s a great fisherman,” said Strissel.

“Boyd reeled them all in and I did the netting,” Dempsey added. “We didn’t lose a fish so you know he did a good job.”

Rounding out the top five co-anglers on day one on Green Bay:

Day two of FLW Walleye Tour competition on Green Bay begins as the field takes off from Breakwater Park and Marina at 7 a.m. Central time Friday for the second day of the opening round.