OCONTO, Wis. – Lake Michigan’s Green Bay is no stranger to hosting professional walleye tournaments, but most events are launched either out of the north end near Escanaba, Mich., or on the south end in the city of Green Bay itself. Depending on where the best bite is taking place, long runs are common on the bay. But the third National Guard FLW Walleye Tour event of the 2011 season is launching out of Oconto, Wis., the perfect in-between location for runs in either direction.

Despite its sheer size, Green Bay is known for having several large community areas that traditionally hold fish. Chief among those is Geano’s Reef, a 3-by-5-mile stretch of fishable water located approximately 20 miles south of Oconto. According to several pros, it’s possible that as many as 100 of the 141 boats this week will head down to Geano’s.

“I’ve heard of some guys running north, but the alewives are spawning right now down south,” said pro Joe McCartin. “The cold spring really held them back.”

McCartin says while the fishing is good, the weights this week won’t be quite as strong as in years past.

“These last couple days of air temperatures in the upper 90s hurt the bite. Any wind helps, but a good weight is now 25 pounds, which is five 25- or 26-inchers. My best day of practice was Saturday, when there were over 200 boats in the Geano’s area with all the locals. I only had five bites, but I probably had a 30-pound sack. Two hundred boats sounds really crowded, but even on a weekend, everyone shared the water just fine.”

While McCartin thinks only 45 pounds over two days will be needed to make the cutoff, pro Glenn Vinton is thinking bigger.

Vinton described the fish as sporadic, not concentrated. Instead of graphing several fish in an area, Vinton said he’s usually seeing loners.

“You’ll mark a fish and then 10 or 15 seconds later the board goes back. If you put it in front of their 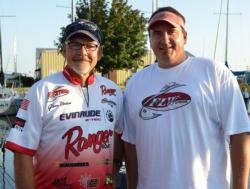 As always, the predominant technique on Green Bay will be trolling spinners or crankbaits, but it’s not out of the question that a different technique will emerge. Back in 2006, local pro Wayne Butz used a jigging bite to score a giant come-from-behind win.

“Something else could always emerge, but I would bet over 90 percent of the field is trolling spinners and crawlers today,” added Vinton.

While there is no slot limit on Green Bay, anglers are allowed only six fish in the livewell. Once No. 6 goes in, the day is over as culling is not permitted. That makes decision-making difficult.

“My thought process is that nothing short of 24 goes in the box. But what do you do when that 22-incher comes early? You do have one to play with.”

Anglers will take off from Breakwater Park & Marina located on Harbor Road in Oconto at 7 each morning. Weigh-ins will also be held at the marina beginning at 3 p.m. Thursday and Friday and

Saturday’s final weigh-in will begin at 4 p.m. Prior to the final weigh-in, there will be a free Family Fishing Clinic where children can win free rod and reels, plus other great giveaways. Fans will have the opportunity to interact with professional anglers, ride a Ranger boat simulator, enjoy interactive games, activities and giveaways provided by sponsors, and learn more about the sport of fishing. All activities are free and open to the public.

In FLW Walleye Tour competition, anglers are also vying for valuable points in hopes of qualifying for the 2011 FLW Walleye Tour Championship held on the Missouri River in Bismarck, N.D., Sept. 22-25.

Anglers are also vying for the coveted Angler of the Year title, which secures them a place in the 2012 Walleye Tour Championship, as well as $10,000 for the pro and $2,500 for the co-angler.