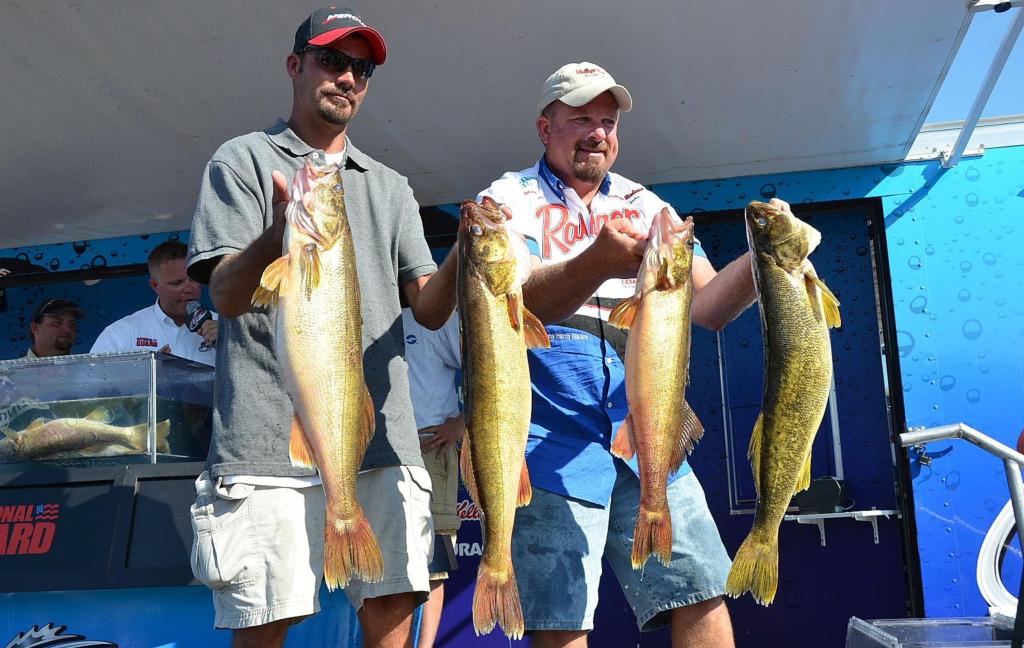 OCONTO, Wis. – Steve Paulsen spends roughly five days a week guiding on the walleye rich waters of Lake Michigan’s Green Bay. Leading up to the National Guard FLW Walleye Tour event the Peshtigo, Wis., native put in even more time on the water. But his practice days could best be described as rollercoasters and once the tournament commenced he didn’t know what to expect.

Despite not catching a single fish there in practice, Paulsen made the last-second call to fish a remote location. It was whimsical decision made after judging the changing wind.

“It’s all about the wind in that spot,” he said. “But we’re fishing all by ourselves; we haven’t seen a boat in two days.”

After catching eight or nine fish yesterday, Paulsen caught only six or seven today. But they were the right fish as they weighed 32 pounds, 5 ounces, the heaviest stringer of the tournament thus far. That sack launched him from 10th to first. Combined with his day-one weight of 27 pounds, 10 ounces, Paulsen has a total weight of 59 pounds, 15 ounces.

“This is like a dream come true,” said the pro leader. “This is what you fish for, to be on top. I’m nervous, but I’m pretty thrilled about it. I haven’t really slept for two days.”

Paulsen could have cracked the 40-pound mark had he boated two pigs that came unbuttoned. And on day one he threw back a 24-incher only to ultimately end up keeping a 20-incher late in the day.

Paulsen isn’t ready to give away pattern details. But he would allow that he’s trolling custom Tommy Harris spinners.

“I really need the wind tomorrow and I am hoping it will produce again otherwise it’s going to be a crap shoot.” 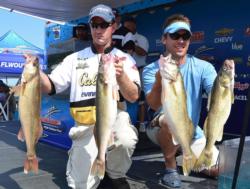 Nineteen ounces behind Paulsen is Rhinelander, Wis., pro Ryan Jirik, who rose from sixth to second on the strength of a 29-pound, 14-ounce stringer.

While most pros are making long passes over featureless stretches of open water, Jirik is structure fishing. He’s still trolling spinners, his made by Downriver Tackle, but he’s making small quarter-mile or half-mile passes. He keeps his vessel moving at about 1.2 mph and targets the lower portion of the water column.

“It’s a structure spot so I don’t have to waste time hunting for them,” he said. “We were done by 1 p.m. yesterday with six fish and today we had five by 9:30 a.m. and I knew I couldn’t upgrade much so we came in.”

Jirik said that the first few passes of each morning are critical. Once the area receives considerable pressure, the bite slows. He doesn’t believe any other pro made the cut from his area, but he realizes local pressure will mount tomorrow.

“They’re there and they’re the winning fish if they’ll bite.” 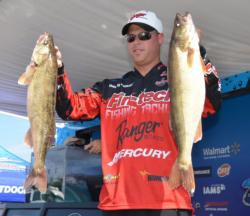 Rising to third place was Milwaukee, Wis., pro Danny Plautz, who has a two-day total of 55 pounds, 1 ounce. Plautz caught 27-5 on day one and today improved slightly to 27-12.

“I’m making short passes on small pods of fish,” Plautz explained. “If I catch one, I immediately turn on it, trying to see where the school is going. The last couple of days they’ve been getting bigger so that’s a good sign.”

Plautz grew up two hours south of Oconto and knows Green Bay well. He didn’t prefish much, instead relying on his previous experience. Like most everyone, Plautz is trolling spinners and crawlers, but he’s got one blade/harness combination that is working especially well. He was mixing and matching early but he’ll run all four lines with said combination tomorrow.

“Right now, it’s got to be 4 pounds or more for me to keep it. Hopefully we’ll get a couple more big ones.” 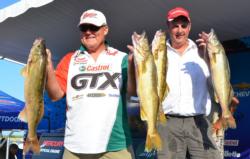 In fourth place with a two-day total of 51 pounds, 15 ounces is Castrol pro John Campbell. The Marco Island, Fla., resident caught 23 pounds on day one and 28-15 today, rising from 32nd place to make the cutoff.

“I had a good practice but the bite didn’t turn on yesterday until the afternoon,” said Campbell. So I had to keep some smaller ones to make sure I had a limit, but today they came in the right order. I think I caught a total of 12 fish.”

Campbell said he has three spots, two of which he pretty much has to himself. Known for running a Ranger tiller, Campbell is trolling spinners with his bow-mount electric motor. 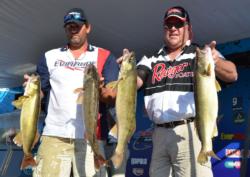 In fifth place with a total weight of 51 pounds, 14 ounces, is Norway, Mich., angler Rob Nickels. Nickels started the tournament in 36th place with 22 pounds, 5 ounces. He soared to fifth today with a 29-pound, 9-ounce stringer.

“I started the day fishing deeper and at about noon I moved shallower and then we really started catching them,” he said. “I think we had so much boat pressure it pushed the fish up. Once we figured that out I bet we caught 20 total; we had a great day.”

Although Nickels lives north of Oconto, he pointed his boat south today. He said he’s comfortable fishing in either direction.

“I’m an open-water troller by nature.”

Rounding out the top 10 pros on day two on Green Bay:

Joe Ebel of Waukesha, Wis., and Wallace Carter Jr. of Lawrenceburg, Ky., are tied for the co-angler lead with a two-day total weight of 54 pounds, 2 ounces.

Rounding out the top 10 co-anglers on day two on Green Bay:

Day three of FLW Walleye Tour competition on Green Bay begins as the top 10 pros and top 10 co-anglers take off from Breakwater Park and Marina at 7 a.m. Central time for the final day of competition.