The pride of Peshtigo 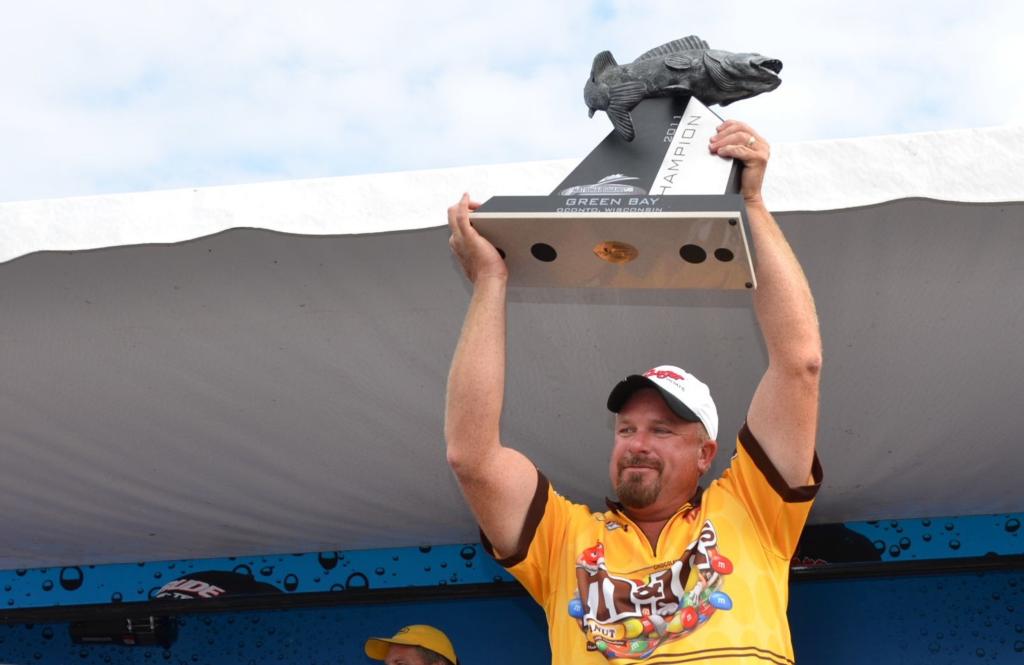 OCONTO, Wis. – Steve Paulsen is no stranger to either Green Bay or tournament walleye fishing. He’s competed in several national team events and years ago fished the Wisconsin Division of the FLW Walleye League. But up until this week, he’d never fished a National Guard FLW Walleye Tour event. Fast forward three days and the Peshtigo, Wis., native is the talk of town after a $55,000 win.

Paulsen, who operates the Walleye Madness Guide service, entered the third qualifier of the year with one location in mind. That spot, located 25 miles northeast of Oconto, is a proven producer in mid-to-late summer. But with this year’s cold spring Paulsen was worried he would miss his window of opportunity.

Despite not catching a single fish there in practice, he turned his boat north at the last second Thursday 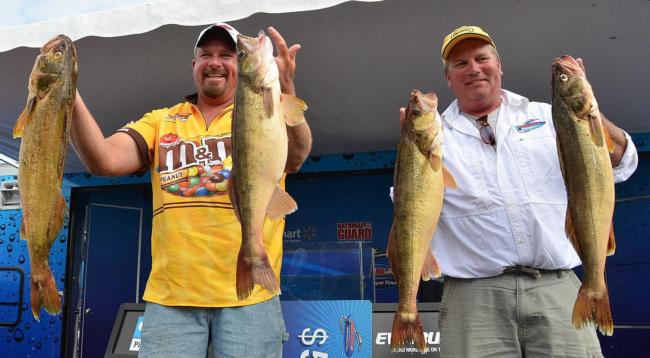 morning. A half hour later he reached a series of six mid-lake rock humps located in a 1/4-mile area. The humps come up to 12 feet of water and slope off into 25 feet.

“I had been fishing with a mess of boats for almost two weeks down in Geano’s and I knew I didn’t want to fight with that group anymore,” he said. “Usually they really start biting there this time of year.”

Paulsen characterized the spot as wind-driven. For the fish to bite, there had to be a chop of two feet or better. The rougher the water got, the stronger the bite got.

On day one, Paulsen sacked a 27-pound, 10-ounce limit and finished tied for 10th. On day two he caught a mammoth 32-pound, 5-ounce stringer to catapult into first place. Then he slammed the door shot Saturday with a 32-pound, 6-ounce limit, the heaviest creel of the entire tournament.

To catch his fish, Paulsen trolled Tommy Harris spinners with night crawlers at speeds of 1.2 to 1.3 mph. The pro winner used 1-ounce snap weights and his best blade colors were greens and golds. While his presentation was fairly standard, his spot was the difference maker. 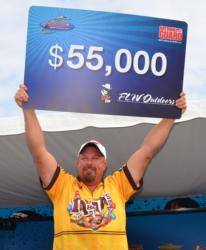 “The fish would come up and then back off those humps. That’s when I’d get bit. It wasn’t fast and furious fishing, but the average size was much better than down south. And the best part about it was not seeing a single boat all week. The bite up north is just getting started and should only get better as time goes on.”

Paulsen boxed a 4-pounder early this morning. His big fish, a 9-pounder, bit at 9 a.m. on his third pass. The next two fish were in the 6- to 7-pound class. At 1 p.m. he played it safe and boxed another 4-pounder. And a half hour later he caught another 7-pounder to finish his day and take an easy ride back to Oconto.

“This is a thrill; it’s a dream come true. That trophy is going to look good on the mantle.”

After Paulsen ran away with the win, Danny Plautz was more than happy to climb from third and finish

“I really tried to stay consistent this week,” said Plautz, who fished the south end of Geano’s Reef.

Plautz grew up two hours south of Green Bay. He didn’t get to practice much, so he relied heavily on previous experience. Sometimes that’s dangerous, but it worked for the Milwaukee, Wis., resident.

“I was trolling with 1-ounce bouncers 35 feet back. I trolled faster than most, at around 1.4 mph. My best blade color was like a perch/firetiger – a combination of orange, white and black on a silver blade.”

On day three, Plautz caught two walleyes on his first two passes. After catching a fish, he’d immediately turn on them to determine which direction the school was moving. 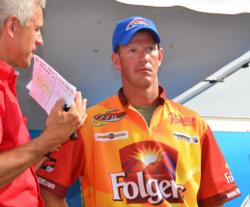 Ryan Jirik also avoided the Geano’s traffic jam, choosing instead to travel 11 miles to the east. There Jirik would structure fish an underwater point. The inactive fish would sit in 30 feet of water and when they fed they’d come up into 20 feet.

“I was trolling my spinners near the bottom of the water column in 17 or 18 feet,” said the Rhinelander, Wis., pro.

The plan worked brilliantly the first two days and on day three he slipped a little, managing a 20-pound, 15-ounce limit. He finished the tournament with 79 pounds, 11 ounces, earning $10,000.

Jirik tied 6-foot leaders to 2-foot harnesses, which is long by open-water trolling standards. His best blades were custom pink and copper made by Downriver Tackle.

“For whatever reason we didn’t get the big bite we needed today.”

Andersen up to fourth 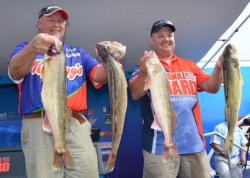 Starting the day in 10th place, Amery, Wis., pro David Andersen had nowhere to go but up. So he swung for the fence and connected big time – hauling in a 29-pound, 8-ounce limit. He finished the tournament with 78 pounds, 1 ounce and earned $8,000.

“We were done by 11 a.m. today,” said Andersen, who also fished the south end of Geano’s. “We just followed the pods of baitfish and moved up and down the water column depending on where they were.”

Andersen said he trolled at 1.1 to 1.3 mph in water 18 to 20 feet deep. After catching a fish, he’d spin around to reconnect with the school.

Climbing to fifth place was Tomahawk, Wis., pro Nick Schertz. Schertz started the tournament in 60th place, and then soared to eighth with a 30-pound, 11-ounce limit. Today he rose to fifth on the strength of a 28-pound limit.

Joe Ebel of Waukesha, Wis., claimed victory and $6,000 in the Co-angler Division with a three-day total 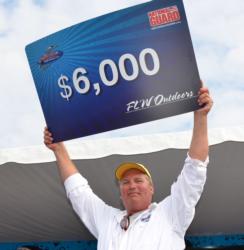 weight of 86 pounds, 8 ounces. Ebel fished with pro Gil Mollet on day one and the two brought in 30 pounds, 9 ounces. On day two he caught 23 pounds, 9 ounces fishing with JD Carr and today he sacked 32-6 with Paulsen.

“I couldn’t have asked for better partners,” said Ebel, who was fishing in his ninth FLW Outdoors event. “Today the fishing was a lot slower than it has been all week. We only had eight or nine bites all day but they were the right bites. This has just been an incredible tournament and I am so excited to have finally made the top 10.”

The next National Guard FLW Walleye Tour event is scheduled to take place August 25-27 on Lake Oahe in Pierre, S.D.