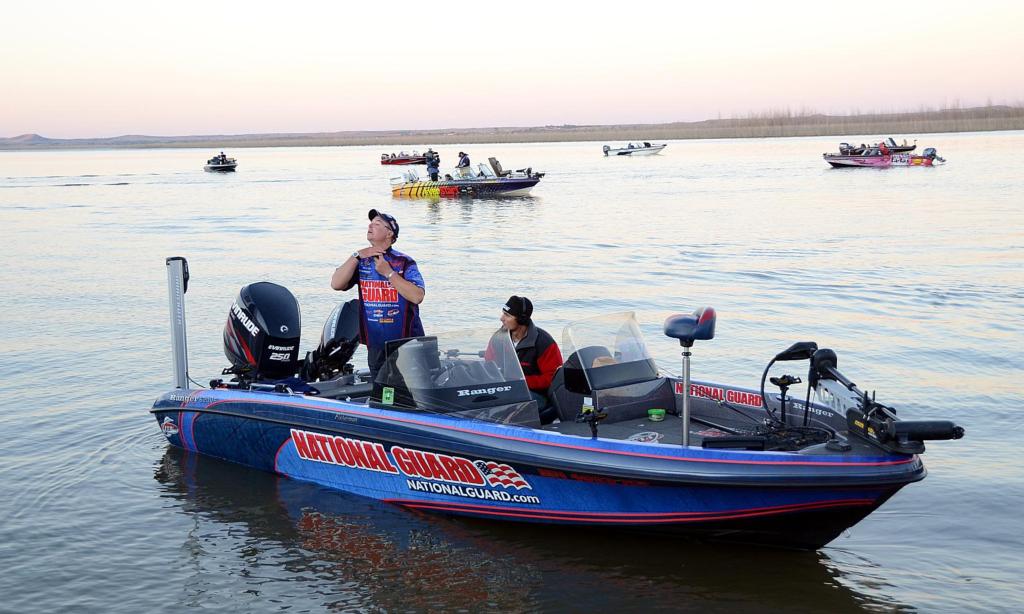 BISMARCK, N.D. – It has already been a championship to remember, with big bags of fish weighed and beautiful weather gracing the 80 anglers who competed on the Missouri River at Bismarck, N.D., this week to close out the 2011 National Guard FLW Walleye Tour season. But today marks the moment the walleye world has been waiting for: the crowning of a pro champion.

A co-angler champion was determined Saturday: Todd Dankert of Anoka, Minn., outfished 40 other competitors in his division to secure his first FLW Walleye win and a check for $7,000. The full pro field of 40 anglers has been pared down to the top 10, and whoever offers the heaviest four-day weight of walleyes after today’s weigh-in stands to walk away with up to $70,000 in earnings plus a massive championship trophy.

The current leader of the pack is Evinrude pro Tommy Skarlis of Waukon, Iowa, who has amassed a three-day weight of 58 pounds and began the day with a 4-pound, 14-ounce lead over his closest competition. Skarlis is no stranger to river fishing and is familiar with this stretch of the Missouri: He won the championship here in 2008. If he can pull out his second FLW Walleye Tour victory today in 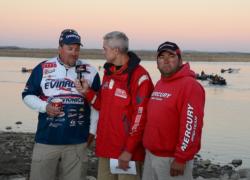 Bismarck, he would be the first pro to ever win a second championship title in this circuit.

Nearly half of the full field worked over a hot spot near the Beaver Creek Bridge on Highway 1804 in the early days of the tournament, fishing in a crowded line of boats along a shelf that is about 40 to 50 yards in length and holds a steep drop down to about 30 feet. While many couldn’t repeat their success from day one on the spot in subsequent days, Skarlis has been the exception. This morning he aimed his boat downriver, as did EverStart pro Dan Stier (fifth place), but a few of the top five headed north. But even if Skarlis cannot work his magic there today with significantly less fishing pressure, he has a couple other spots upriver he will try.

“I’ve got a couple of tricks up my sleeve,” he said. “You’ve just got to find the fish and put the right thing in front of them. There is something that’s changing in this river.” 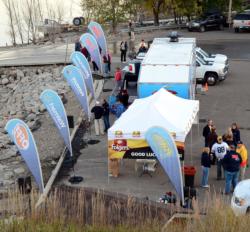 Indeed, after a season of flooding and high water, the Missouri River has been dropping rapidly in this area over the last week, leaving anglers to decide whether to change their patterns and presentations from what may have worked during practice.

One thing that has not changed about the FLW Walleye Tour Championship is the stiff competition. Skarlis is not the only pro positioned to make history: Walmart pro Dean Arnoldussen (second place) and OFF! pro Chris Gilman (sixth place) also have a legitimate shot at being the first two-time championship winners, especially considering that a few walleyes have been weighed this week that break the 8-pound mark. One of those came from of one of Arnoldussen’s spots about five miles upriver from the launch site at Hazelton Access Area.

Suspense and mystery, the latter including closely guarded fishing secrets, are part of tournament-fishing culture. But one thing is crystal clear: Today’s final weigh-in will be one to watch, and the

conclusion is guaranteed to be exciting.

Keep up with the action as it is unfolding with FLWOutdoors.com’s on-the-water-updates, sponsored by Chevy.

For those who cannot make it to the weigh-in, which begins at 5 p.m. Central today at the Bismarck Civic Center, tune in online via FLW Live. And check out the stable of FLW Walleye Tour video – including interviews, weigh-in footage, TV shows and more – available this week during the championship. 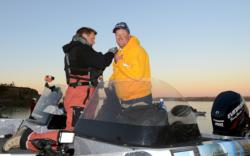 Water temperature at the ramp: 57 degrees

Day’s outlook: sunny with temperatures rising towards the low 70s; winds S at 15 to 20 mph