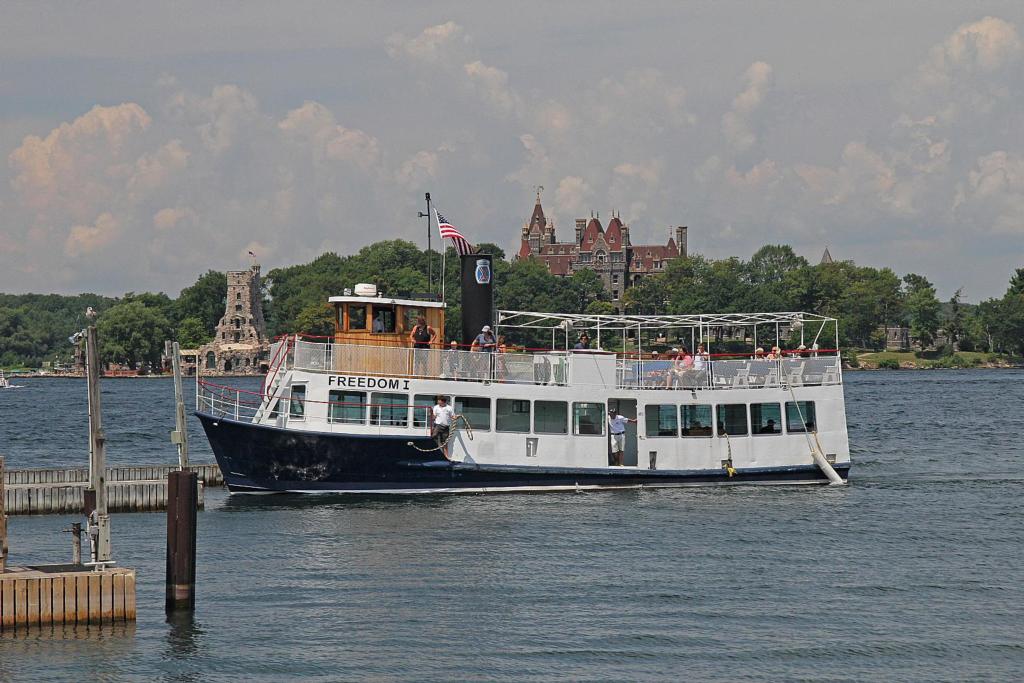 1000 Islands offers both a bountiful fishery and a scenic wonderland for tourists and anglers. Photo by David A. Brown.
November 2, 2011 • David A. Brown • Uncategorized

Long before European arrival, the Iroquois Indians hunted and fished New York’s bountiful 1000 Islands region. In fact, the region was so special for the Iroquois that they had a unique name for it, calling it “Manitonna,” or “Garden of the Great Spirit.” Today not much has changed with one of the most pristine waterways in the nation as visiting anglers can still enjoy cornucopia of angling abundance awash with ambient gems in one of upstate New York’s most spectacular scenic regions. 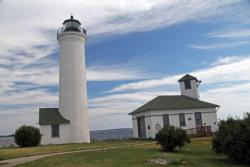 As far as fishing destinations go, the 1000 Islands region is easily one of the most highly recommended areas to visit in the lower 48 states. We’ll get to the fishing stuff in a moment, but first, a regional overview. Where the St. Lawrence River meets Lake Ontario, an astoundingly beautiful waterway blends natural forested splendor with charming waterfront towns, opulent island homes, magnificent castles and sites of Canadian and U.S. historical significance. This pristine region, stretching from Cape Vincent at the mouth of the St. Lawrence downstream about 50 miles to Ogdenburg, N.Y, has seen primitive trappers in canoes, explorers/cartographers, river pirates, bootleggers and naval vessels. Today, the St. Lawrence hosts a nearly non-stop parade of recreational vessels – both freshwater “Lakers” and seagoing “Salties – along with immense cargo ships traversing the St. Lawrence Seaway.

As for the area’s most common connection, the thick and savory salad dressing did, in fact, take its name from the 1000 Islands region. Historical accounts of the recipe’s origin vary, but George Boldt, former owner of New York’s Waldorf Astoria Hotel, is credited with introducing the condiment through his hotel’s restaurant after tasting it while cruising the area. Whatever the back story, the region’s signature name is actually a bit of an understatement, as sprawling waterway actually comprises 1,864 islands ranging in size from mere rocky points to sprawling land masses of several square miles.

These visible islands are remnant peaks of an ancient mountain chain formed by Ice Age glacial carving. Melting ice formed the river and the Great Lakes and the ensuing forestation and geographic isolation has made these rocky mounds attractive home sites for the affluent, where stunning architecture has created a visual feast of residential grandeur. This, along with relaxing waterfront vibes and the international flavor of a bisecting U.S.-Canadian border has made the 1000 Islands a premier angling destination. 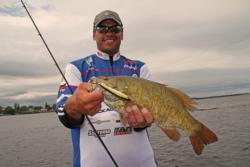 With abundant forage and perennially clean water, the 1000 Islands region boasts stellar sport fishing with loads of northern pike, muskie, trout, panfish and bass. With smallies and largemouth in thick supply, the bass action ranks among the nation’s finest.

EverStart pro Gregg Seal of Eldred, Pa., has vacationed in the 1000 Islands since his youth and favors the St. Lawrence River’s confined playing field to the vastness of Lake Ontario. “I like how the fish relate to the current and the breaks and the structure. To me, it’s easier to target them.”

Indeed, dropping jigs, drop-shots or Texas-rigged worms over protected river spots is a comfy way to pass a day. Of course, when it comes to tournament competition, there’s no question that the big waters offer more opportunity. In most cases, competitors duck into the St. Lawrence to escape the roller coaster ride of a windswept Lake Ontario. However, if it’s doable, most prefer to get it done in the lake.

Canadian standout Bob Izumi – winner of the 2011 EverStart Northern Division event at the 1000 Islands – agrees, but notes that Ontario’s immense area can prove daunting to those lacking a plan. For him, it’s all about dialing in the right types of area – typically hooks in bottom contour in about 20 to 40 feet – and locating the quality fish by working off to the sides of bottom breaks. Watching his Lowrance HDS unit, he’ll spot these larger marks and quickly usher his drop-shot bait to the strike zone with a 5/8- to 1/2-ounce tungsten weight. Two advantages here: punching through the rough water to reach bottom quickly and stabilizing the rig to help maintain the essential vertical presentation when windy conditions have you rockin’ and rollin’.

“It’s really important to drop on them and not have a light weight that slowly falls,” Izumi said. “You want something that’ll get down there and almost hit them on the head.” 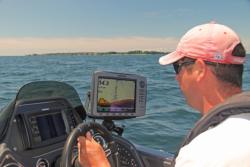 The deep stuff accounts for the majority of 1000 Islands action, but don’t overlook the shallows of Chaumont Bay and around Grenadier, Galloo, Stony and Main Duck Island. Here the fish roam the 4- to 8-foot range. However, Izumi expects to find the most fish in areas near spawning grounds or around abundant bait.

When fish go shallow, Lucarelli likes to work topwaters, jerkbaits and spinnerbaits over rocks. When he moves deeper, he complements his bottom view with Lowrance Side Imaging for peripheral views. On a recent outing, he spotted a promising boulder in 18 feet, shot out a waypoint and later pulled a 3-pounder off the rock.

Lucarelli also does most of his damage with a drop-shot, but he’ll mix up his presentations with tubes. Important, he said, is a jighead with a 60-degree eye, which creates a line angle that keeps the bait on the bottom where it imitates a goby.

From personal watercraft to luxury yachts, the 1000 Islands region is a recreational boater’s paradise as a nearly constant parade of river traffic bespeaks this timeless attraction. For visitors, a river cruise presents the ideal sightseeing option with the benefit of historical narration.

On the U.S. side, Uncle Sam Boat Tours (USboattours.com) offers convenient and dependable cruise services originating at the resort town of Alexandria Bay. Hailed as “The Heart of the 1000 Islands,” Alex Bay offers a cozy vacation setting with an attractive blend of tourist-friendly accommodation and hometown authenticity. Here, the entertainment includes the Akwesasne Casino, a performing arts center, ice skating rinks, golf courses and an old-fashioned drive-in theater. At mealtime, your options range from elegant dining where reservations are required to casual dockside fare at relaxed eateries where shorts and t-shirts are just fine. (For a true local flavor, try a slice of “river rat cheese” – a tasty dairy treat available at local shops and gas stations.)

Located closest to the region’s most stunning section – the opulent “Millionaire’s Row” – Alex Bay makes a great base point for 1000 Islands visits. From State Road 12, SR 26 runs north into town, under the signature archway and down to James Street Dock – the hub of activity with an assortment of street-side eateries and souvenir shops, along with purveyors of locally made confections and nautical art. Lower James Street Dock holds the Uncle Sam ticket office, piers and free parking lots. It’s here that visitors board spacious, multi-level tour boats with air-conditioned enclosures and plenty of open deck space for the countless photo opportunities. 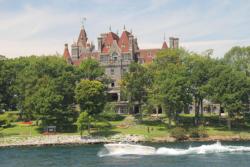 In 1900, an army of carpenters, stonemasons and artists began the elaborate project, but when Louise suddenly died in 1904, her heart-broken husband halted construction and never returned to this property now owned and operated by the 1000 Islands Bridge Authority. (Shuttles run every 30 minutes so there’s no reason to miss a personal visit, even if your schedule can’t accommodate a river tour.)

Other sites to see

Just 20 minutes west of Alexandria Bay, relaxed and unassuming Clayton, N.Y., earned Budget Travel Magazine’s ranking as one of America’s Coolest Small towns (early 2011). Considered the “cultural center” of the 1000 Islands, nearly the entire downtown district is designated by the U.S. Federal Registry as “Historic,” with buildings dating back to the late 1800s.

In the early 1900’s, Clayton served as the northern terminus of the N.Y. Central Railroad with over 30 trains a day moving through what is now Frink Memorial Park. Many brought passengers to the steamships providing transport to island homes, as well as U.S. and Canadian communities throughout the St. Lawrence River. Today, visitors find the world famous Antique Boat Museum, the world’s largest fresh water maritime museum, the 1000 Islands Museum of Clayton (featuring the Muskie and Duck Decoy Halls Of Fame).

Cape Vincent: This quiet waterside village at the mouth of the St. Lawrence River presents several historic homes, including the Stone House on Route 12E. Built by James LeRay de Chaumont in 1815 for his son Vincent (the village’s namesake), the property housed Canadian Soldiers during the Patriot War (1838). The Tibbetts Point Lighthouse has been guiding vessels from Lake Ontario since 1827. 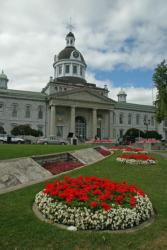 Kingston: Canada’s original capital and Ontario’s second oldest city, Kingston’s position at the juncture of Lake Ontario and the St. Lawrence River played a vital role in Canada’s naval protection. In 2007 UNESCO’s World Heritage Organization designated the Rideau Canal-Kingston Fortifications (Fort Henry, Fort Frederick) as Ontario’s first World Heritage Site. Known as “the Limestone City,” many of Kingston’s historic buildings were built from the locally-hewn rock. The narrated Confederation Trolley Tour originating at the Visitor’s Centre in Confederation Park opposite City Hall offers a great introduction to the many historical and cultural gems within this neatly organized city.

From the Clayton-Alexandria Bay area, drivers can reach Kingston by taking I-81 north to the first leg of the 1000 Islands Bridge at Collins Landing to Wellesley Island. From, there two Kingston routes follow the border crossing (second bridge) at Hill Island. Past the border gates, drivers should continue along Highway 137 and take the bridge’s final leg across the river to the Ontario mainland, just east of Ivy Lea. Highway 137 intersects Highway 401 (MacDonald-Cartier Freeway), the quickest route to Kingston. However, taking the 1,000 Islands Scenic Parkway, just after the bridge, offers a more scenic drive with historic buildings, provincial parks and cozy bed-and-breakfasts within Canadian riverside communities like Gananoque – known as “Canada’s Gateway to the 1,000 Islands.”

After a fishing trip, cruise or casual drive around the 1,000 Islands region, visit Sky Deck – the 400-foot tower on Hill Island (Ontario) that offers a stunning 360-degree view of this unforgettable region. On a clear day, the view reaches up to 40 miles and that’s a lot of islands to count.

For information on travel, accommodations, dining and activities within the 1000 Islands, go to visit1000islands.com/visitorinfo or 1000islands.com