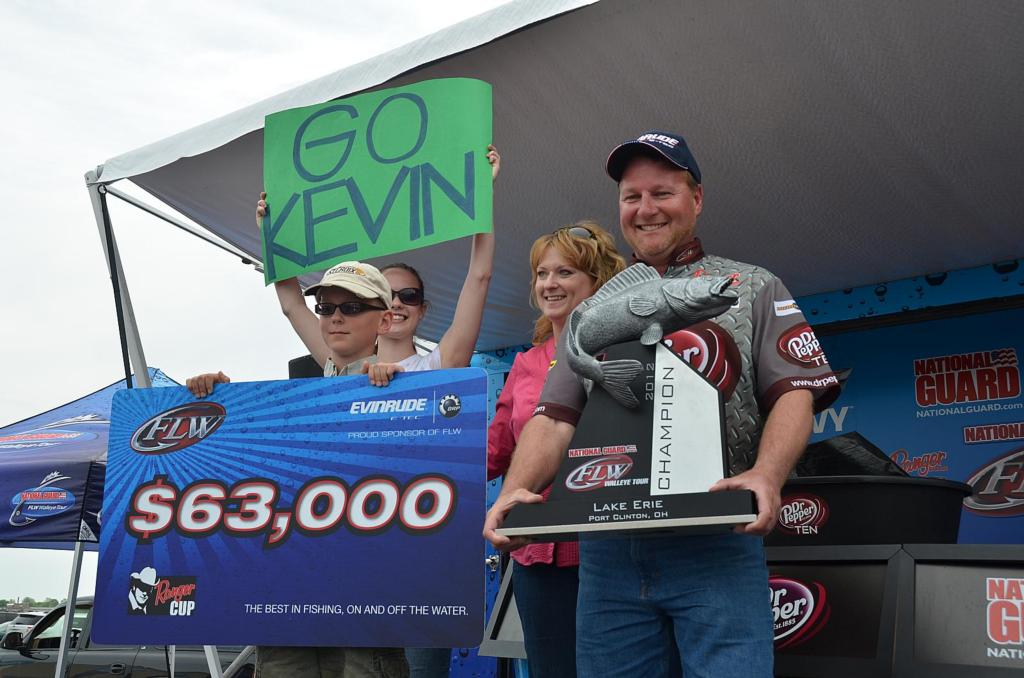 PORT CLINTON, Ohio – Going into the final day of the National Guard FLW Walleye Tour Isle, Minn., native Kevin McQuoid said that he liked being in second place. Luckily for McQuoid, he didn’t need to stay there long. He brought in the largest bag weighed on the final day, 38 pounds, 8 ounces to help boost him to the top of the leader board. With a three-day total weight of 118 pounds, 4 ounces, McQuoid grabs his third victory on the National Guard FLW Walleye Tour and joins fellow angler Dean Arnoldussen as the only pros to do so. He also got to take home $63,000 in winnings. 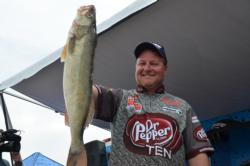 One of the big factors that helped McQuoid was staying consistent every day. On the first day he weighed in a 38 pound, 15 ounce sack and followed that up with 40-13 on day two. He was the only angler in the top 10 that managed to keep such a great average over three days.

He fished in the same area during the whole competition, and stuck it out even when the bite slowed. In true Erie fashion, McQuoid was pulling spinner rigs all week. For his blade size he went with a number 5 or 6. The most productive colors for him were any combination of white, chartreuse, pink or purple. He would start most of his blades back about 50 feet in the morning then after 10a.m. he would move them to around 40 feet. On the first day he would run about 1.5 miles per hour on his troll to get the better bites but over the last two days he slowed to 1.1-1.2 mph.

“Today started out not as good as the past few days,” said McQuoid. “But I got a few good ones in the boat early and it really helped calm me down for the rest of the day. I knew I had to catch 38-40 pounds today to really give myself a chance to win.”

To make this victory even more special, McQuoid was joined by his in-laws, wife and two children who he originally thought were still in Minnesota. After speaking to his wife the evening before the final day, and knowing he had a chance to win, McQuoid’s wife loaded up the family and hit the road. They drove 14 hours from their home in Isle, Minn., and surprised Kevin at the boat ramp.

“It means so much to me having my family come all this way out here to surprise me,” he said. “It’s just awesome, absolutely awesome to have won this event and get to share it with my family.” 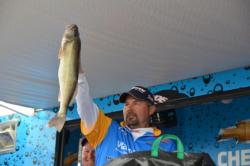 Walmart pro Dean Arnoldussen of Appleton, Wis., brought in his smallest bag of the tournament on the final day weighing only 30 pounds, 4 ounces. Thankfully he had a good day one and excellent day two bag to bring his total weight for three days to 113 pounds, 2 ounces, giving him second place.

Just as he did throughout the tournament, Arnoldussen was pulling spinner rigs with number 5 Northland Tackle Rainbow Holographic blades. Most of his fish were coming off of bottom or close to it. He credits a lot of his fish being caught due to his Tattle Tail Flags on the back of his planer boards. Arnoldussen also used his engine-mounted Minn Kota motor to help keep his rigs going the right speed and provide excellent boat control.

“I wouldn’t change how I did anything,” he said. “I fished well this tournament and I am happy with the decisions I made.”

Arnoldussen was awarded $23,500 for second place. 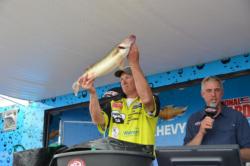 Going into the final day the Rockford, Mich., pro David Kolb had a little bit of ground to make up. So when he brought the second best bag of the day to the scales – 37 pounds – he was pretty satisfied. That weight helped him jump from seventh place all the way to third with a total weight of 111 pounds, 14 ounces, and earned him $11,000.

“I was feeling good today,” said Kolb. “My Ranger boat was hauling this morning. I passed guys on the way to my spot. And when I got there, I set the first rod, then as I was setting the second rod I got bit and caught a 7-pounder.”

Kolb used Fish Bones Custom Tackle spinner blades and spoon harnesses. He kept his blade colors to copper-back blades early in the day then switched to gold-back blades later in the morning. Kolb varied his depths throughout the day to cover the water column.

“I really didn’t think I would finish this far up,” he said. “But I can say that I am definitely not complaining.” 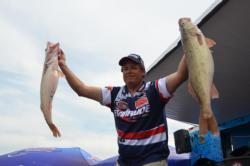 After Leading the tournament on day one with a 42 pound, 13 ounce limit of walleyes, Evinrude pro Richard Zachowski just couldn’t keep it up over the final two days. He stumbled a little on day two bringing only 31 pounds, 8 ounces to the scales. And finally on day three he managed a 36-4 bag to bring his tournament total to 110-9, and a check for $12,500.

Over the course of the tournament he focused mainly on the bug hatch that was going on. Where he would find the bugs, he found emerald shiners. Using his Lowrance HDS he could mark the hatches of bugs coming off the bottom. Zachowski would then watch to see where the baitfish schooled up at and the walleyes wouldn’t be far behind.

The big factor to help get the better bites this week was rubbing Dr. Juice attractant on his crawlers. Zachowski varied his depths he ran his rigs at based on where in the water column he marked the bait.

“I really needed the wind to help get the bugs cranked up,” he said. “Though without a doubt rubbing Dr. Juice on my worms helped get me the bigger fish this week, and help me make the cut to the final day.” 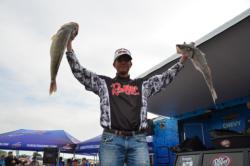 Fishing in his first ever top-10 on the National Guard FLW Walleye Tour, Ranger pro David Kleszyk was just happy to be around on the final day. The Oakbrook Terrace, Ill., native brought in 33 pounds, 2 ounces on the final day to bring his overall total to 109-11. His weights may have dwindled everyday but his confidence never left him.

“I caught a 9.8-pounder on the first pass and lost a big another big one that we had on at the same time,” said Kleszyk. “Other than that though it was a grind for me today.”

Kleszyk also put Dr. Juice on his worms while pulling spinner rigs. Gold number 5 Colorado blades with combinations of bright colors were the ticket this week. He ran purple and chartreuse beads on his rigs, alternating each color up the line.

“I am just super excited to have made it to the show this week.”

Kleszyk walked away with $9,500 in prize money.

Rounding out the top 10 pros from the National Guard FLW Walleye Tour event on Lake Erie: 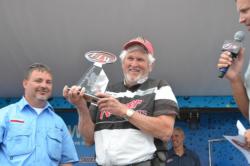 Coming off of a top-10 finish at the first National Guard FLW Walleye Tour event of the year in Red Wing, Minn., Jimmy Cox was looking to carry his luck into this event. He came to Lake Erie with confidence and on the first day being paired with Richard Zachowski they brought in 42 pounds, 13 ounces.

He fell into second place after day two but sat less than a pound and a half from the lead. For the final day he was paired with Kevin McQuoid. And after seven years of trying, and numerous top-10s, Cox finally took home a title. The duo’s catch of 38 pounds, 8 ounces on the final day brought the Bono, Ark., resident a total weight of 115-12 and a check for $8,500.

“It feels great to win,” said Cox. “I felt like this week was going to be my week. After yesterday though I was a nervous wreck.”

“Kevin (McQuoid) and I just worked so well together today,” he said. “It clicked for us, and I couldn’t be happier with the result.”

Rounding out the top 10 co-anglers from the final day:

The next National Guard FLW Walleye Tour event is scheduled to take place July 12-14 in Pierre, S.D., on Lake Oahe.