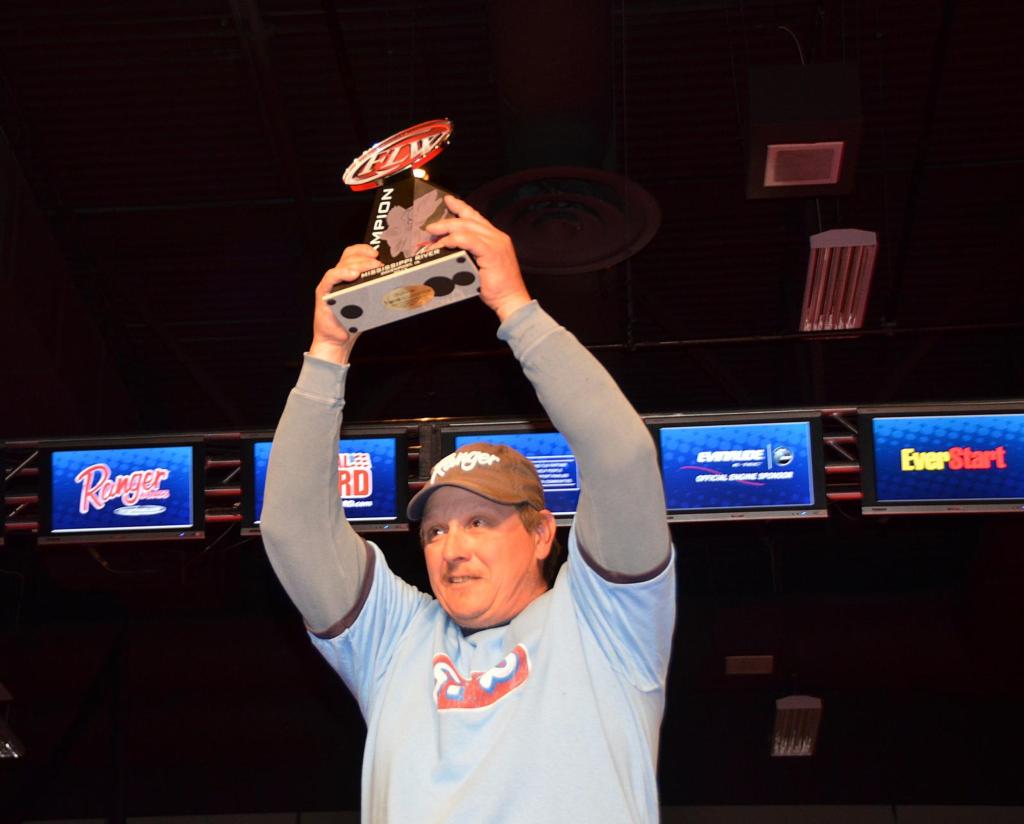 DAVENPORT, Iowa – In his first full year on the National Guard FLW Walleye Tour, Tom Weihoff of Pierre, S.D., wasn’t even sure he would make it to the championship. After a rollercoaster ride of a season, Wiehoff accumulated enough points to punch his ticket to the biggest stage in walleye fishing.

On his first day of competition he was paired with legendary angler Ted Takasaki. The duo managed to bring in 7 pounds, 1 ounce to put him near the top of the leaderboard. Day two found Wiehoff paired with Mercury pro Danny Plautz and together they worked hard to catch another respectable bag weighing 5-12. Starting the day 4-5 behind Stuart Lubbert on day three, Wiehoff was once again paired with Plautz. The Mercury pro had one thing on his mind today – catching enough fish to get Wiehoff the win. Plautz and Wiehoff found four fish that hit the scales at 6-6, giving Wiehoff the win by over a pound and earning him a check for $8,000.

“This is just an incredible feeling,” said Wiehoff. “I can’t even begin to describe it. This is lots of hard work that finally came together for me. Danny (Plautz) told me the other day to get my rest because he was going to put me to work. I can honestly say I have never worked so hard for such few fish in my life.”

Living close to one of the best walleye fisheries in the country – Lake Oahe – allows Wiehoff to fine-tune his skills all year long.

“I have some incredible guys I fish with back home,” Wiehoff continued. “Dan Stier and Garrett McComsey are two guys that I fish with a lot and they teach me so much. I am very fortunate to live in Pierre and have a good group of guys to go on the water with.

“I just want to thank my wife – she encourages me to do this stuff, stands beside me and is there to do anything for me. I just can’t love her or thank her enough.”

When asked if he had anything planned for his big check, Wiehoff simply chuckled, “Pay off my credit card bills from traveling all over the place this summer to fish.” 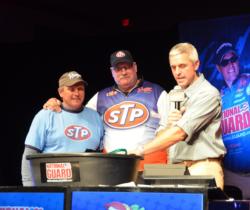 Stuart Lubbert of Stewart, Minn., fished in his very first walleye championship this week. In fact, this was his first year to ever fish the FLW Walleye Tour.

With his day one pairing of Danny Steffens, the two sat in 24th place with a catch of only 1 pound, 13 ounces. Day two was the turning point for Lubbert – he got paired with Chevy pro Jason Przekurat. Boosted by the largest weight of the tournament – 15-4 – Lubbert climbed to the top of the co-angler standings with a healthy lead. Unfortunately on day three the tough conditions on the river caught up with Lubbert and Przekurat and they could only manage 1-10 giving Lubbert a three-day total of 18-11. The second place finish earned Lubbert $2,500 in tournament winnings.

“I can’t say enough about Jason Przekurat,” said Lubbert. “He taught me so much this week, if it wasn’t for him I wouldn’t even be here. It is just incredible to watch a guy like Jason do what he does best, it was the highlight of my season.”

Lubbert hopes to take the knowledge he learned on tour this year and one day try to fish tournaments from the front of the boat.

“I love to walleye fish, and to one day go pro is a dream of mine,” continued Lubbert. “I try and get out on the lakes around my house and down on the Mississippi River as much as I can to practice the things I have learned. I even went out and bought a Ranger 620 just so that I could have better equipment.” 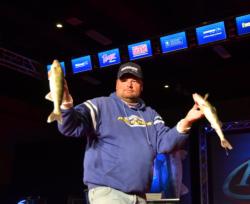 The defending 2011 National Guard FLW Walleye Tour Champion from the co-angler side made a solid run at the title this week. Todd Dankert of Anoka, Minn., drew veteran pro Keith Kavajecz on day one to weigh 2 pounds, 12 ounces. Dankert would spend the final two days with Mercury pro Ed Stachowski catching 5-13 and 8-2 putting his overall total to 16-11. That weight was good enough to earn Dankert a check worth $5,250 for third place.

“When Przekurat brought in that huge bag on the second day I knew my chances at winning were slim,” said Dankert. “Fishing with Ed for two days, I knew what to expect and what we were going to do. All we could do today was to try and get a limit early then go find a big fish. But in the end I am happy where I ended up. It was a tough hill to climb and I just had to do what I could.”

Dankert would also like to take his abilities to the front of the boat some day, but says he is having too much fun as a co-angler to stop.

“I just want to say thanks to Ranger, Evinrude and Minn Kota for their support.”

Rounding out the top-10 co-anglers from the FLW Walleye Tour Championship: