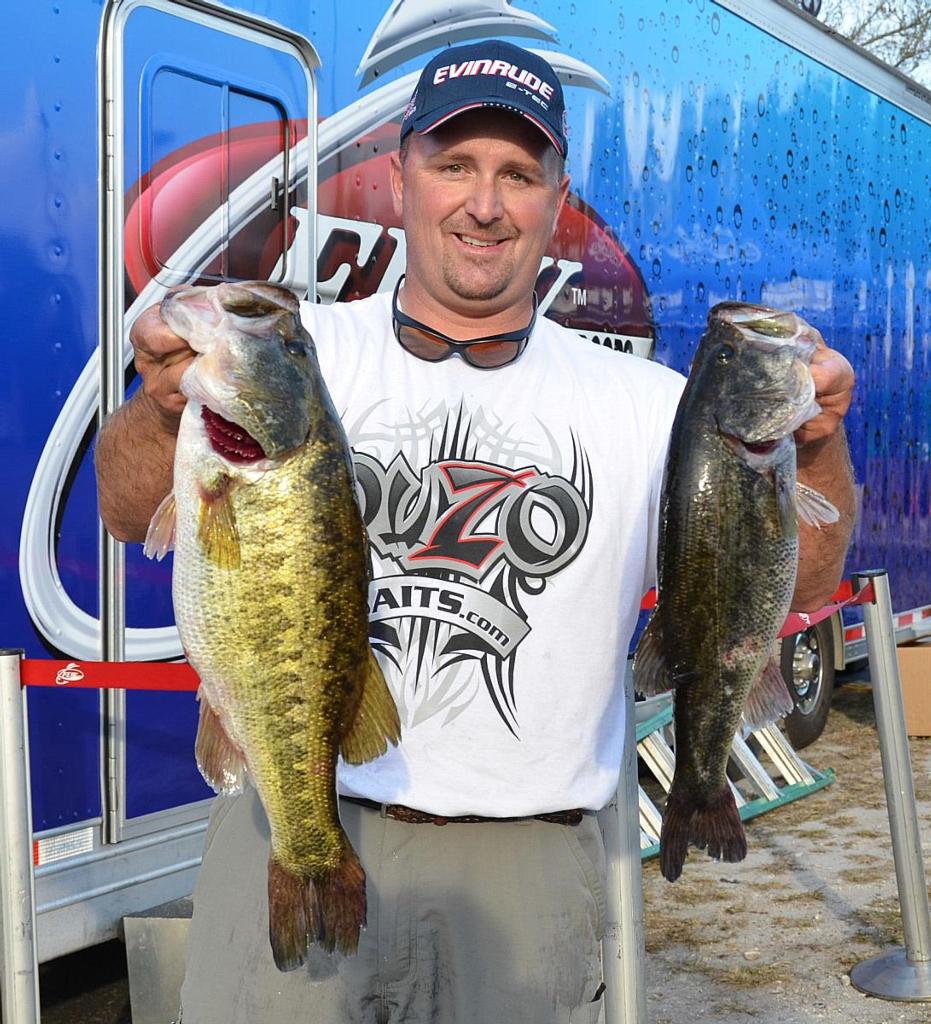 – MODERATOR COMMENT –
Welcome to FLW Live Reel Chat. Today we’re joined by veteran pro Koby Kreiger of Okeechobee, Fla., who recently took home the top prize of $50,000 plus a fully-rigged Ranger Z118 with a 200-horsepower engine after winning the 2012 EverStart Series Championship on the Ouachita River.

– MODERATOR COMMENT –
Today, Kreiger is here to take questions from you, the fans. So, without further delay, let’s get started.

Q: How does this EverStart Championship compare to your other victories, especially your first championship back in 2002?
— Gary (Minnetonka, MN)
A: When I won this one, I got pretty emotional on stage. This sort of verifies that I’m doing what I need to be doing. And it shows that all my other victories from years past aren’t a fluke because I hadn’t won a tournament in awhile. Being the first guy to win two of them, its always nice to be the first guy to do something. Plus, its always good to end the year on a good note. Hopefully I can carry that momentum forward.

Q: My question is I’m fishing on the bank and the lake has nothing but weeds.What do you think I should use?
— Dan (Pemberton, NJ)
A: The best thing you can use fishing from the bank is either a small spinnerbait (if you can get it through the grass) or some type of Tiny Torpedo or Crazy Shad topwater bait – you know the ones with a propeller. If those don’t work, I would try a weightless Senko.

Q: What’s the status of the Big O? I heard there were some pretty good rains the past few months that have it pretty full. How’s the fishing?
— Tony (Dearborn, MI)
A: The lake right now is 15.5 – so there’s plenty of water to go wherever you want. When the Tour visited last February it was around 12.5 so there is a lot more water now. And the fishing is absolutely phenomenal. As a matter of fact, I went this morning and we caught 44 bass, six of those were over 6 pounds. The Big O is rocking and rolling.

Q: Why do you excel in the fall? What is it about fall fishing that suits your style?
— Nick R. (Clarksville, TN)
A: Most of the time in the fall, you’re back fishing shallow water. I think in the fall its even more predictable because you’re looking for pods of bait. When you find the bait, you’ve just got to figure out how to make them bite because most of the time there’s going to bass around. Once you figure out the pockets or areas the bait are in, you can put together a pattern that will work all over the lake.

Q: First of all Congratulations. Can you talk a little about how you started bass fishing and your first ever tournament win.
— Pablo Gonzalez (Goshen, IN)
A: I started bass fishing at the club level back in Indiana when I was 10 or 11 years old. My dad had to sign the waivers to let me fish because technically I wasn’t old enough. Then I went from fishing the clubs with my dad to fishing the BFL’s. After a few years of that I qualified for a couple regionals. Then, I started to learn as a co-angler fishing down south. I fished my first professional event in 1995 and my first FLW tournament was in 1998. I did it gradually; I was always working in my family business and fishing. In 2002, the year my dad passed away, was the first year I did it full-time. My first win was in 2002 at the Kentucky Lake EverStart Championship. I won that tournament just a month or so after my dad passed away. It was one of those deals where my dad was still right there with me. That was a pretty neat deal.

Q: Everybody thought the championship would be won fishing backwaters. You targeted the main river and used the A-rig on a fishery that doesn’t exactly lend itself to A-rigs. How did you identify your pattern?
— Paul (Monroe, LA)
A: Basically it was one of those deals where I started in the backwaters but there were so many boats and so many stumps. It was almost impossible to get around and there was so much pressure. After one day of practice, I decided this wasn’t going to work. So I went to the river for the rest of practice. On the third day of practice, when I put the boat in the water it was like 10:45 down by the Columbia lock. To my surprise, there was bait all over the place as idled up and down the river. Then I went up to these trees and you would catch a fish off every one. There were just thousands and thousands of baitfish in these trees. They never really came up and ate them on top, but you knew they were eating them under the surface. From there, on the last day of practice we just marked every tree we could find. In total, I’m guessing I had 50 or 60 trees. Not every tree produced a fish every day, but I can say that each one produced a fish during the four-day tournament.

Q: How did you mix up the crankbait and the A-rig? Did you start with one and then go to the other?
— Paul (Monroe, LA)
A: I threw the A-rig in the more open areas. When the trees were more submerged or there were bigger gaps I would throw the A-rigs. In tighter situations when the trees were closer to the top I would throw a spinnerbait or crankbait. In the mornings, I would throw a crankbait around the bank just to catch some roaming. The tree pattern wouldn’t get good until later in the day from 11 until the end of the day.

Q: How deep did the CP1 dive for you? I love that bait but I use it more in the spring.
— Dwayne (Cleveland, TN)
A: It’s a great bait anytime you’re targeting fish that are less than 4-feet deep because the bait basically runs 3 feet.

Q: People say you’re the best sight-fisherman in the world? What’s your take? And if that’s true, what makes a good sight-fisherman?
— Brett (Victoria, MN)
A: I don’t know that I’m the best at anything in the world. Let’s put it this way, if there’s a sight-fishing tournament I know I can hold my own. As far as being a good sight-fisherman, you’ve got to have good vision. I think using the right colored lens at the right time or light exposure is really key. Being patient is key and knowing what do with your bait and when to do is also very important – things like where to put your bait on the bed and how to move it.

Q: What is your favorite bait for sight-fishing? I prefer to use a tube but lately I’ve had more success with finesse baits like shaky heads and drop-shots.
— Brett (Victoria, MN)
A: My No. 1 sight-fishing bait is a white Zoom Z-Hog. The Z-Hog is thick like a Brush Hog but it is shorter. I also use a Beaver (white trash) and I use a Zoom Magnum Blueberry Lizard. And that’s pretty much it. I don’t get real involved with shaky heads or drop-shots. Most of the time I use 15-pound test line and I just go to work.

Q: You’ve had such a good career with numerous Forrest Wood Cup qualifications, five EverStart wins, etc. How much does it bother you to not have an FLW Tour win? Can you call your career a success without one?
— Tim B. (Fayetteville, AR)
A: I would rather have my career be the way it has been than win one FLW Tour event and never be heard from again. I basically want to fish to pay my bills, and to live the way I want to live. Would I like to win an FLW Tour event? Oh yeah. I told my wife on the way home from Louisiana that that’s the next thing on my list. But I don’t want to be a one-hit wonder.

Q: Do you think the bass will be spawning when the FLW Tour visits this April?
— Tim B. (Fayetteville, AR)
A: If there is a full moon happening when we’re there, there will be some spawning. But I don’t know if there’s a full moon or not; I honestly haven’t looked at my calendar.

Q: What is your favorite species of bass to fish for (largemouth, smallmouth or spot)? And what would be your least favorite, especially in a tournament setting?
— Gary (Minnetonka, MN)
A: I would say fishing for either spots or smallmouths are great because there are aggressive and less affected by weather, plus they both like eating topwaters. I know you said favorite but I really can’t separate them. Fishing for largemouths out deep is my least favorite for sure though.

Q: Here in NC the weather is jumping up and down like crazy. Just wanted to ask what would be your favorite method of fishing right now?
— Tyler (Grover, NC)
A: I would still try and find the bait, whether that’s throwing an Alabama Rig or a spinnerbait. If you find the bait, you’re going to catch them.

Q: With Okeechobee to start and then several spring-time tournaments, how do you like your chances at winning Angler of the Year?
— Justin (Montgomery, AL)
A: To be honest with you here, I struggle on Okeechobee unless they’re spawning. Winning Angler of the Year will be really tough for me because there’s always going to be at least one tournament that is dominated out deep. And I just don’t know that I can scrape together enough points in that one to compete if that makes sense.

Q: Koby, you and Craig Powers (CP) are known for fishing these homemade flat-side crankbaits. I understand you guys both prefer them on spinning equipment. Can you talk about the equipment you like to use specifically for this technique? Thanks.
— Chris (Dallas, TX)
A: I use a 6 1/2-foot Halo spinning rod with medium action. My line is 10-pound test monofilament and my reel is a Stradic CI4. A lot of people trying throw them on casting gear, but the bait is just too light. I use the spinning rod because you can be that much more accurate with the cast. With baitcasting gear, you’re just going to be all over the place.

Q: Are you more of an offshore/structure/deeper water type fisherman or more of a shoreline/structure/shallow water type fisherman?
— Denny (Beloit, WI)
A: Obviously, I like to beat the bank. But I’m a lot better offshore now than I was years ago. It’s not that I can’t do it, but when there is a $10,000 check on the line I’m so much more confident fishing shallow. I’m just slowly growing my confidence out there and the electronics have been a big help with that.

Q: Do you prefer power fishing or finesse fishing? And which presentation do you use the most?
— Denny (Beloit, WI)
A: I’m more of a power fisherman and the techniques that I use the most are throwing small homemade crankbaits, throwing a ChatterBait or throwing some kind of topwater bait. I’m pretty much going to have those three baits rigged and ready on my deck no matter where I’m at.

– MODERATOR COMMENT –
Unfortunately, that’s all the time we have to chat with Koby Kreiger today. Thanks, once again, to all the fans who tuned in and participated in today’s Reel Chat. And a special thanks to Koby Kreiger, the 2012 EverStart Series Championship winner, for giving us his time and insights.