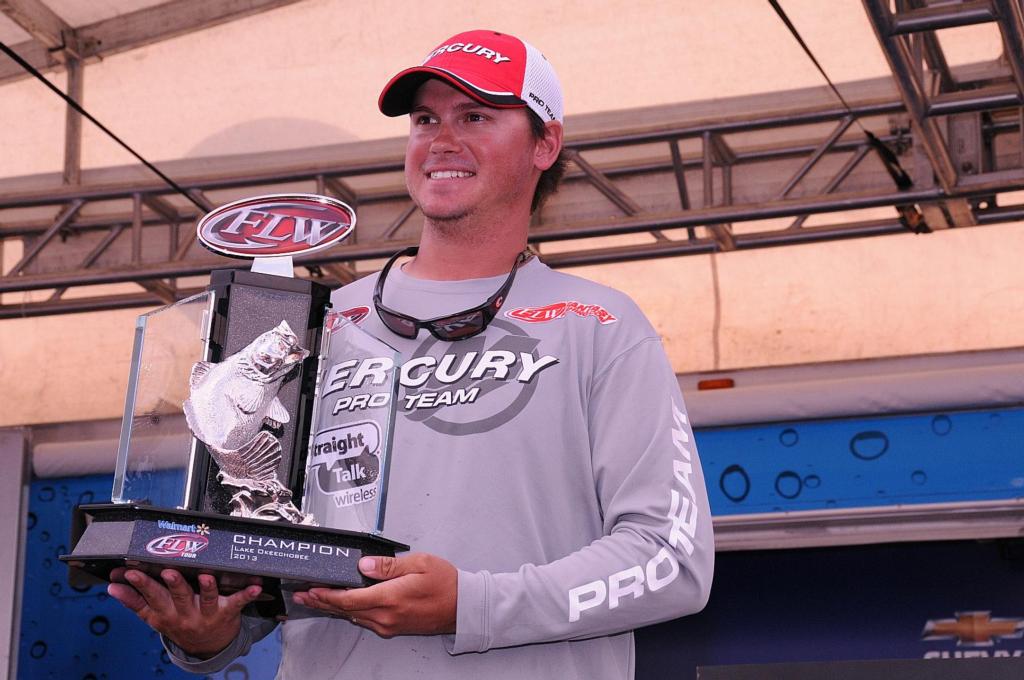 Each year when the FLW Tour kicks off there is usually a fresh bloom of new names who fill the tournament roster with high hopes of breaking into bass fishing’s big leagues.

The FLW Tour Opener on Lake Okeechobee was proof positive of that phenomenon when four of the top five spots in the season’s first event were taken up by names that are not exactly well-known in the pro ranks. FLW Tour icon Brent Ehrler, who finished second, found himself surrounded by a handful of new faces that few on Tour recognized.

At the conclusion of the event fans studying the standings found themselves asking: Who are these guys who were able to come into FLW’s top tier and secure a top-five spot against the better known players in the game?

Great question. So here is a closer look at four new FLW Tour pros who found early-season success at Okeechobee. 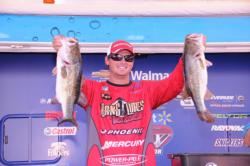 Occupation: Longshoreman at the Port of Panama City

Knew I wanted to get serious about tournament fishing when: “I was 16 and fished my first tournament. I have been hooked ever since.”

Fishing inspiration: “First my grandfather for taking me fishing. As for tournament fishing, KVD. That guy is all business. He doesn’t make himself out to be somebody or something he is not. He is the genuine article and I can appreciate that.”

FLW Tour event most looking forward to this season: Eufaula

Imagine entering your first FLW Tour event as a pro and winning it. That’s exactly what happened to Drew Benton at Lake Okeechobee.

“I’ve worked at the Port as a longshoreman since I was 18 years old,” Benton said. “I’ve logged thousands of hours on hot ships, stocking them with copper, wood pellets and steel. The dream to fish for a living is what drives me everyday. Every one who works with me at the Port can tell by the look in my eyes that’s all I think about: making it as a professional angler. They support my dream, too, and they want to see me make it out there fishing.”

Benton embarked on the EverStart Series in 2009 and made a steady climb up through the regional-level events over the last three years. Last year he fished both the EverStarts and the BASS Opens and earned a check in every event except one. At that point, he decided to put in for the FLW Tour for 2013.

“I felt like if I was going to get checks in tournaments, I wanted to at least get $10,000 checks,” Benton said. “I obviously had no idea I would win right out of the gate. And it really still has not hit me yet. All I can say at this point is that hopefully its confirmation that I’m making the right decisions on this career path.”

Another right decision Benton made was finishing his degree in Business Marketing from FSU Panama City.

“That was driven by fishing, too,” Benton said. “A college degree can be a big difference maker on sponsor resumes. Plus I wanted something to fall back on just in case fishing does not work out.”

But it looks like fishing will be working out for Benton for a while as his thousands of hours of dreaming about fishing for a living become a reality. 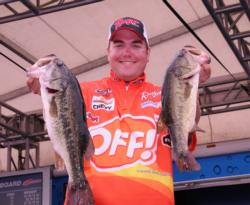 Knew I wanted to get serious about tournament fishing when: “As a freshman in high school I gave up baseball to fish more.”

FLW Tour event most looking forward to this season: Chickamauga

For proof that the new faces in professional bass fishing mean business, consider Michael Neal. At 21 years of age, Neal is a junior at Bryan College studying Computer Science, he also owns the Dayton Boat Dock and Grill and is fishing his second year on the FLW Tour. Oh, and he comes complete with a glowing endorsement from a neighbor of his in Dayton, some guy named Andy Morgan.

“Michael is the real deal,” said well-known FLW Tour pro Andy Morgan. “He comes from a tremendous fishing family in this area. He’s a fast learner, smart as whip and a great offshore fisherman. I’ll put it to you this way, if I have something going on with my electronics that I need tweaked, the first call I make is to Michael. He’s a perfectionist when it comes to electronics and the offshore game.”

“School works with me,” he said. “They excuse my absences when I’m on Tour. Sure I would like to fish more, but I want a degree as a back up.”

Interestingly, Neal jumped straight from the BFLs into the FLW Tour, bypassing the EverStart series. In 2008 and 2009, Neal fished as a co-angler on the FLW Tour while fishing as a boater in BFLs.

“That was a great learning combination for me,” Neal said. “I could pick up things from the Tour and apply them in BFLs. In 2011 I won three BFLs and I decided to try to use that momentum to go straight to the Tour as a boater in 2012.”

This year Neal is off to a much stronger start. His third-place finish at Okeechobee came from Government Cut where he spent all four days.

“I had never been to Okeechobee before,” Neal said. “So I just picked out a section of the lake and dedicated myself to finding fish in that area instead of running all over the place each day. I wanted to find some kind of contour – which is hard to do in Okeechobee – so I settled into the northeast side of the lake where Government cut ran through a bunch of flats and bays and I fished the canal edges where it dropped into deeper water. I felt comfortable holding my boat in 5 to 8 feet of water and casting up into one and two feet – it’s the closest thing I could find to the way I like to fish and it worked.”

Neal’s primary observation about fishing in the pro ranks is that there is no time for dawdling or indecision.

“The best guys are at the top of their game mentally,” he said. “There is no room to get flustered or bogged down. You have to stay focused and be able to make super quick, efficient decisions and they have to be the right decisions at the right time.” 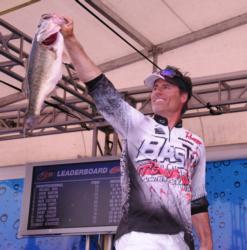 Favorite fishing style: “Gorilla fishing in the thickest cover I can find.”

Highest FLW finish prior to Okeechobee: 10th in EverStart on Detroit River in 2011

Fishing inspiration: “Just the vast challenge of fishing itself.”

FLW Tour event most looking forward to this season: Okeechobee

Wade Hendricks is fishing his second year on the FLW Tour. His best finish in 2012 was 19th at the Potomac River.

While other newcomers are looking to break into the big leagues of fishing to shape their own fishing careers, Hendricks agenda is a little different. He wants to use pro fishing as an avenue to get his business venture BassTrac.com off the ground.

“BassTrac.com is three years in the making,” Hendricks explained. “It’s an online lake-specific resource featuring 120 lakes across the country. It’s a one-stop site to get just about any piece of information you want about a lake and it will be a powerful tool for tournament anglers. We are looking to launch the site this summer.”

Hendricks wants to do well in the pro ranks to prove that his BassTrac system is a legitimate resource.

“I want to do well for the sake of my business and my product, which we have put countless hours into building,” Hendricks said. “My success can help accelerate BassTrac’s launch and expedite its acceptance by bass anglers of all levels as being a viable way to quickly cut the learning curve on unfamiliar lakes.”

Hendricks is off to a good start with his finish at Okeechobee where he fished near the mouth of Uncle Joe’s cut all four days.

“I found a place where the bass were funneling in off the main lake into the vegetation to spawn,” Hendricks said, “It was a break in the hard line – kind of a soft spot in the vegetation line – where fish could access the protection of the grass. I stuck with it even when the east wind piled in there on the final days.”

Like others on this list, Hendricks has a lot of irons in the fire these days. On top of trying to launch a revolutionary fishing business and fishing the FLW Tour, Hendricks just became a proud, new father on February 17. 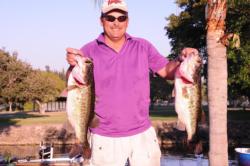 Highest FLW finish prior to Okeechobee: Third in Guntersville EverStart, 2012.

Knew I wanted to get serious about tournament fishing when: “In 2002 a friend and I fished our first team tournament and took second place. Since then I’ve realized this sport is a lot harder than it looks!”

FLW Tour event most looking forward to this season: Chickamauga

As a retired construction manager, Rick Cotten is starting a second career as a professional bass angler on the FLW Tour.

Cotten retired from the construction industry in 2010 and purposely moved to Lake Guntersville to accelerate his learning process on the water and to be more centrally located to tournament venues.

“Guntersville is a great place to learn a lot about bass fishing in a hurry,” Cotten said. “This lake is so diverse and you can learn so many techniques here. The fastest way to get a lot of confidence in different techniques is to catch a lot of fish and this lake has a lot of fish.”

Cotten also says that he purposely waited to retire to start his fishing career.

“I’ve had a bass boat since 2002, but I knew there was no way I could juggle my construction work with tournament fishing,” Cotten said. “I wanted to be 100 percent focused on fishing when I turned pro.”

After moving to Guntersville in 2010, Cotten spent the first year fishing the lake six days a week without entering any tournaments. His primary focus was just to learn. In 2011 he fished the EverStarts without much success.

In 2012 he entered both the EverStarts and the FLW Tour. But after a horrible start at Hartwell, he knew his Forrest Wood Cup hopes were dashed and only fished two more Tour events last year, including Kentucky Lake where he finished 12th.

Cotten says being retired from a previous career has been the biggest help in his fishing endeavor, especially financially.

“My hats off to all the young guys who come out here with little or no (financial) help, trying to keep jobs and raise families while attempting to launch a fishing career,” Cotten said. “Just the little bit I’ve been in it, I can tell you it’s a tough road. I can’t imagine trying to rely on just tournament checks to pay the bills.”

Cotten actually led the Okeechobee event after day two when he sacked the biggest limit of tournament weighing 30 pounds, 3 ounces.

Nothing can really prepare you for an experience like that,” Cotten added. “To catch that size fish and then come in leading the event was quite a thrill. But when the wind came in the final two days, I had nothing else to fall back on and those are the kinds of things I’m learning about in multiple day events. Having options to adapt to the conditions is a must.”