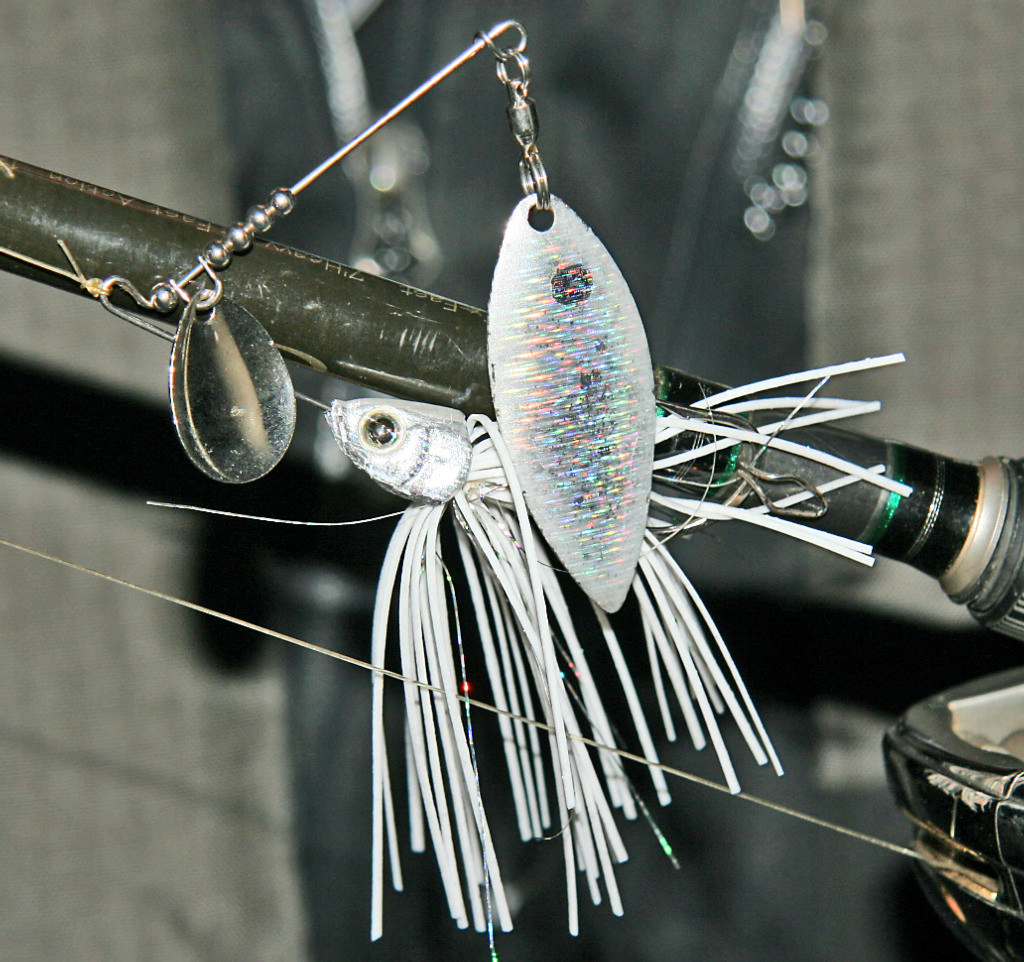 Spinnerbaits have proven effective, particularly when baitfish school near the surface. Photo by David A. Brown.
July 4, 2013 • Matt Williams • Uncategorized

(Editor’s note: This article originally appeared in the July 2013 issue of Bass Fishing magazine. To read more compelling articles from Bass Fishing magazine each month, become an FLW subscriber member. If you’d like to sign up for a digital subscription to access articles online, click here).

What bass lure is more versatile than the spinnerbait? Not only will it work in water that is clear, stained or muddy, a spinnerbait will catch bass that are holding in shallow water or deep around all sorts of structure and cover such as grass beds, brush, laydowns, rocks, ledges, docks and stumps. Adding to the versatility of the trusty lure, it can be adapted to situations when the fish want something moving quickly, slowly or at a retrieve speed somewhere in between.

Naturally, some spinnerbaits work better for certain applications than others, based largely on factors such as weight, head design, color, blade style and blade size. Even trailer choices can make a difference at times.

Walmart FLW Tour pros Terry Bolton of Paducah, Ky., and Tommy Martin of Hemphill, Texas, have a ton of confidence in spinnerbaits and are masters at fishing them from top to bottom. I recently caught up with the two anglers and asked them to share some insight on what they look for in a spinnerbait when employing it for a couple of popular tactics that are pretty much polar opposites from one another: waking on the surface and slow-rolling in deep water. 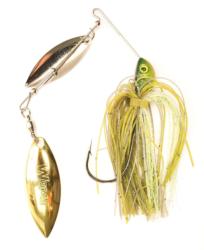 • Compact design: Martin opts for a compact spinnerbait and steers clear of those with long, flimsy arms. “The more compact the bait, the better it will cut the wind and the longer casts you can make,” he says.

• True runner: One of the best tests of balance in a spinnerbait is how straight it stays at high speeds. “Some will roll to one side when you burn them,” Martin says, “and that’s not what you want.”

• Blade combinations: Some guys prefer a tandem willow-leaf or Colorado setup, but Martin prefers a combination: No. 5 gold willow leaf outside and No. 2 nickel Colorado inside.

Martin points out that bulging the surface tends to fail way more often than it works, but when it does produce it can be almost like magic. He likes to wake in late spring, when the water temperature ranges from 62 to 72 degrees, but the primo time occurs from about mid-August through November.

The technique will work on just about any lake, but certain factors dictate when Martin will try it. Relatively clear water is a common denominator.

“On rocky lakes, such as Table Rock or Bull Shoals, it’s pretty much an early morning deal, unless you have some wind to put some ripple on the surface,” he says.

Another midday option is to key on bluff banks that are blocked from the sun.

“We call it `playing the shade,'” he says. “A little wind can make a stretch like that exceptionally good.”

Wind also is a key on grass lakes, but low light conditions are rarely very productive. On the Texas lakes that Martin frequents, the bite is best from midmorning up through the middle of the day.

Grass lakes: Water depths of 2 to 4 feet with scattered cover near deeper drops are ideal. Martin looks for areas with clumps of vegetation in the mouths of creeks or coves. It also can be effective around laydown logs, flooded bushes, riprap and docks.

Mountain lakes: Martin will target slightly deeper water – about 4 to 6 feet – in mountain lakes. He likes to wake along on defined breaklines where lighter colored shallow water meets with the darker green of deeper water. Underwater rocks, laydowns and other cover he can see with the aid of polarized sunglasses get special attention.

Line: Martin prefers 17-pound test when he can get away with it, but will sometimes go to 14-pound test for improved casting distance. The limited stretch of fluorocarbon provides better hooksets.

Reel: Use a reel with a fast gear ratio. Martin particularly likes a 6.4:1.

1. Use a trailer – It provides some resistance to bulge the surface more easily.

2. Upsize blades – On Northern lakes Martin will occasionally go to a No. 6 or 7 outside willow-leaf blade to create a bigger wake that can sometimes trigger aggressive smallmouths.

3. Kill it – Killing the spinnerbait and letting it fall a couple of feet next to bushes and boulders will sometimes draw strikes from fish that are reluctant to chase. 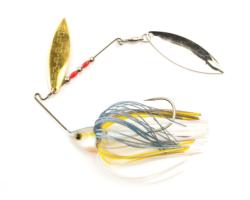 Key features: Special Raz-R-Blade High RPM blades prevent blowouts at high speeds. Depending on its color pattern, the Perfect Skirt attracts attention or can be matched to local forage, while 3-D eyes give bass a target to attack. The lure also features a premium Gamakatsu hook. 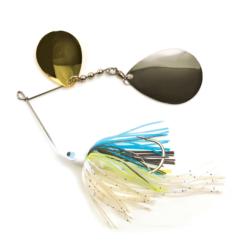 Key features: The Wake Bait model has No. 5 and No. 7 Colorado blades for maximum thump at the surface and the ability to wake at slower speeds. A twist-wire line tie adds extra support. It’s equipped with a skirt that can be swapped quickly, and a Mustad hook rounds out the package.

Terry Bolton on the deep slow-roll 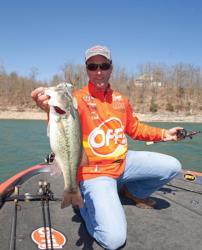 • Size: Bolton prefers a 3/4-ounce spinnerbait in water depths up to 20 feet. In deeper water, he switches to 1 ounce or heavier to maintain bottom contact using a relatively slow retrieve.

• Good balance: The OFF! pro wants a well-balanced spinnerbait that will right itself quickly after colliding with brush, stumps or rock and not roll on its side. He says baits with a rounded head usually maintain better balance than those with longer minnow-shaped heads.

• Bolton’s favorites: Spinnerbaits made by: Picasso, Stanley and Oldham

Bolton has found that slow-rolling a spinnerbait on bottom in deep water works best under three types of conditions:

• When the wind blows and clouds fill the sky.

“A lot of times, especially in summer or early fall, you might get 5 to 6 feet of visibility in a lake,” Bolton says. “A little wind will put some chop on the surface and make the fish a lot easier to fool, even in deep water. A partly cloudy sky with wind can make it even better.”

• In summer on Tennessee River impoundments during years with lots of spring rainfall. This causes the water to develop a slight green tint that is always conducive to a strong bite. Similar water color scenarios play out in other regions too.

• The postspawn season. “When the fish first get on the ledges, they’ll be out there suspended and looking for an easy meal,” Bolton says. “You can catch some big fish winding a spinnerbait up through the school.”

Deep structure: The slow-roll will work anytime the fish are holding around deep structure such as ledges, bluff walls, points or channel swings. Bolton says it also can be effective around deep hydrilla in early spring, when the grass is still fairly short.

Mountain lakes: When bass suspend around pole timber on mountain lakes in the summer, a similar slow-rolling technique is deadly. But instead of slow-rolling along bottom in deep water, try slow-rolling the blade up through trees. Its wire arm and somewhat protected hook point allow the lure to snake up and over branches without snagging.

Line: Bolton says the high sensitivity and low stretch properties of fluorocarbon are critical for feeling subtle bites and getting solid hooksets on a long cast in water that is 18 to 25 feet deep. He prefers 14- to 17-pound test Gamma.

1. Lift and drop – If bass aren’t reacting to a steady slow-roll, Bolton points the rod tip directly at the spinnerbait and moves it with four to five revolutions before killing it so it falls on a semi-slack line. This is when most strikes occur. “If I feel a fish swipe at the bait while it’s moving, I might speed it up for three to four revolutions and then drop it,” he says. “Oftentimes the fish will come back and crush it the next time you move it.”

2. Add a trailer – Bolton always uses a white ribbon-tail trailer on his spinnerbaits for enhanced action and visibility in deep water. He says a trailer also provides some buoyancy, which makes it easier to “float” the lure just off bottom at slow speeds.

3. Don’t give up – Sometimes it takes multiple casts to a sweet spot to activate the school. If you miss a strike, allow the bait to fall back to bottom on a slack line. “Sometimes they’ll come back and hit it three or four times and finally eat it right beneath the boat,” he says. 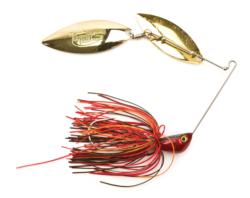 Key features: Stanley overbuilds this spinnerbait with a heavy-duty, spring-tempered 302 stainless-steel wire frame and No. 5 and No. 4 willow-leaf blades; a model that combines a Colorado blade and willow-leaf blade also is available. Stanley uses Accent Flash silicone skirts and Mustad hooks. 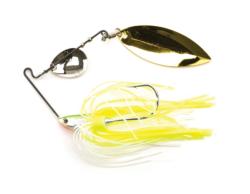 Key features: It’s built around a patented SnapBack titanium frame, premium VMC hook, 3-D eyes and a QuickSkirt with Power Pulse trailer extensions that can be custom-trimmed if needed.