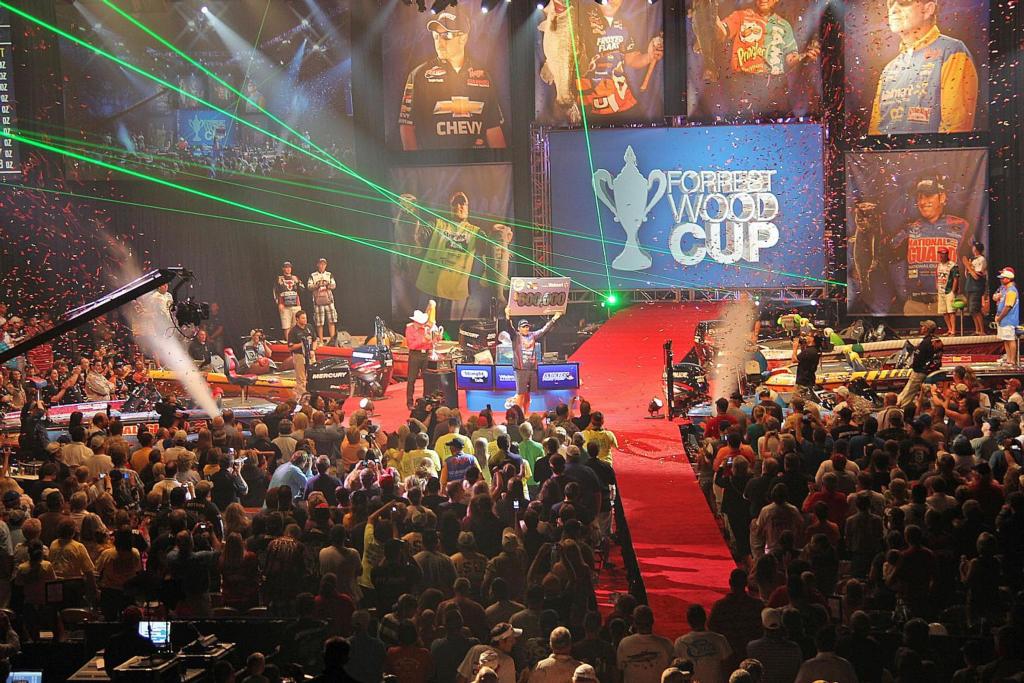 With the 2013 Forrest Wood Cup slated for Aug. 15-18 on the Red River in Shreveport, La., the clock continues to tick toward the start of one of the most prestigious and exciting bass-fishing championships in the nation. In an effort to provide bass-fishing fans with a little more perspective and background on the competition, FLWOutdoors.com is launching a six-part series/overview of each of the 46 qualifying pros – one of whom will walk away with the title of Forrest Wood Cup champion.

With a guaranteed first-place prize of $500,000 on the line, there is clearly plenty at stake this summer in Louisiana. So without further ado, let’s meet the contenders.

(Editor’s note: Forrest Wood Cup competitors will be featured in alphabetical order. This is the second in a six-part series.) 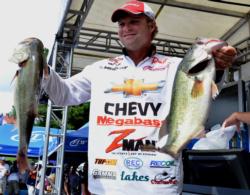 Luke Clausen, Spokane, Wash. – Chevy pro “Lucky” Luke Clausen boasts a veritable encyclopedia of accomplishments since joining FLW back in 2003. In 2004, during his rookie season on the FLW Tour, Clausen took home a first-place check for $500,000 after winning the Forrest Wood Cup. In 2006, he won the Bassmaster Classic. And, as of today, Clausen’s career FLW earnings exceed $1.526 million. Clausen has recorded 18 top-10 finishes (12 on the FLW Tour alone) and three career FLW victories, including a 2011 FLW Tour win on the Potomac River. Clausen will be making his ninth Forrest Wood Cup appearance, including eight in a row, after qualifying for this season’s championship via the FLW Tour. The Washington native finished the 2013 FLW Tour season ranked ninth overall. 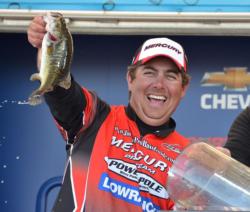 John Cox, Debary, Fla. – Since joining FLW back in 2004, John Cox has amassed career earnings exceeding $320,000. Cox has recorded 14 top-10 finishes, including three on the FLW Tour since the 2011 season. He has three wins to his credit (two BFL titles in 2005 and 2007, and a 2011 FLW Tour victory on the Red River – the site of this year’s Cup). The Florida native also boasts the angler-of-the-year crown for the 2010 FLW Series Eastern Division. Cox, who will be making his second trip to the Forrest Wood Cup, qualified for this year’s main event by finishing second overall in the 2012 FLW Tour Open year-end standings. 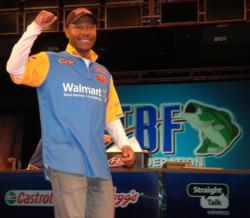 Mark Daniels, Jr., Fairfield, Calif. – Mark Daniels received an automatic invite to this year’s Forrest Wood Cup by winning the prestigious 2013 TBF National Championship. Bolstered by a total catch of 62 pounds, 4 ounces, including 19 pounds, 4 ounces during the final day of TBF National Championship competition, Daniels walked away with the tournament title as well as the coveted $100,000 “Living the Dream” prize package – which provided the California native with an automatic invite to fish as a pro on the FLW Tour during the 2014 season. Daniels, who joined FLW back in the 2007 season, has four top-10 finishes (including two FLW Series final-day appearances at the California Delta in 2007 and 2010). Although Daniels qualified for the Forrest Wood Cup as a co-angler back in 2008, this August he will be making his first appearance in the main event as a pro. 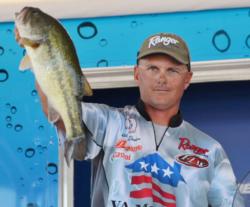 Robbie Dodson, Harrison, Ark. – Robbie Dodson began his FLW career back in 2007 and since that time he has garnered just over $450,000 in winnings. The Arkansas pro has recorded 11 top-10 finishes, including three on the FLW Tour since 2011. Dodson boasts three FLW wins, all coming in the EverStart Series Central Division (Norfork Lake in 2008; Table Rock Lake in 2011; and on Bull Shoals in 2012). He qualified for this year’s Cup via the FLW Tour where he achieved an overall ranking of 37th place, his best finish on the Tour to date. This will mark Dodson’s second season in which he qualified for the Forrest Wood Cup as a pro, the first of which came in 2011. 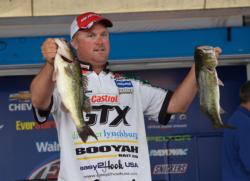 David Dudley, Lynchburg, Va. – Out of all of the contenders heading into the 2013 Forrest Wood Cup, David Dudley boasts arguably the most storied career of the entire field. After making history in 2012 by becoming the only competitor in FLW history to capture the AOY title in back-to-back years, Dudley hit the 2013 FLW Tour season with high expectations. But while the Virginia pro stumbled a bit in the opening stanza of Tour action this season, he quietly rebounded to finish the year ranked 16th place overall. In addition to a fourth-place finish during this year’s FLW Tour Lake Eufaula event, Dudley now boasts three FLW Tour AOY titles (tied for the record with Clark Wendlandt), 38 top-10 finishes, three FLW Tour titles (Fort Loudoun-Tellico Lakes in 2008, Beaver Lake in 2012 and Lake Champlain in 2012) as well as one Forrest Wood Cup victory – a riveting 5-ounce win on the James River in 2003. Dudley also took home the 2002 Ranger M1 title on Alabama’s Mobile Delta, winning a then record $700,000 first-place check. Not surprisingly, Dudley also remains the all-time FLW money leader, recently surpassing $3.27 million in career earnings. Dudley, who began fishing FLW events back in 1995, will be making his 15th Forrest Wood Cup appearance in 2013. Dudley has also qualified for the Cup every single year but one (2005) since the 1997 season. The Virginia pro received an automatic berth in this year’s Cup due to winning the 2012 AOY title but would have qualified for the Cup regardless due to his overall year-end ranking on the FLW Tour this season. 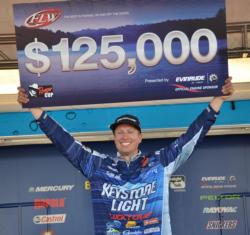 Brent Ehrler, Redlands, Calif. – Keystone Light team pro Brent Ehrler has had a truly remarkable career since making his FLW debut during the EverStart Series Western Division back in 2003. Boasting eight FLW victories, 31 top-10 finishes and over $2.1 million in career earnings, Ehrler has been a major player on the FLW Tour since 2005. In fact, from 2007 through 2011, the California pro finished no worse than ninth place overall in the FLW Tour Angler of the Year standings. While he slipped to 32nd in the standings in 2012, he rebounded to capture an eighth-place overall AOY finish this season. From 2008 through 2011, Ehrler produced a remarkable four consecutive top-five AOY finishes, including two runner-up results. In addition, Ehrler won the 2006 Forrest Wood Cup in the very first year he participated, netting a nice $500,000 payday for his efforts. With five FLW Tour victories to his credit (the Cup in 2006, Lake Ouachita in 2010, Table Rock Lake in 2010, Lake Hartwell in 2012 and Lewis Smith Lake in 2013), Ehrler remains one of the most dominant anglers on the Tour, qualifying for the Forrest Wood Cup ever single season since 2006. Ehrler received his eighth straight Cup berth as a result of his final 2013 FLW Tour ranking, bolstered in large part by a second-place finish at Lake Okeechobee to kick off the season as well as his March win on Lewis Smith Lake. 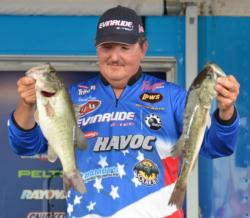 David Fritts, Lexington, N.C. – One of the most accomplished crankbait specialists in the business, David Fritts boasts a storied resume as well. With nearly $1.32 million in earnings since he began his career with FLW back in 1995, Fritts has nailed down 20 top-10 finishes (including an incredible 16 final-day appearance on the FLW Tour alone), six FLW wins and 11 invitations to the Forrest Wood Cup. Fritt’s FLW Tour victories include Lake Guntersville (2009), Lake Okeechobee (2001) as well as three titles during the 1997 season (Lake Eufaula, Kentucky Lake and Lake Ferguson). Fritt’s win at the Forrest Wood Cup on Lake Ferguson also represented the first time an angler had received a $100,000 first-place prize at a year-end championship. Fritt’s qualified for this year’s Cup via his 36th-place finish in the final 2013 FLW Tour rankings. 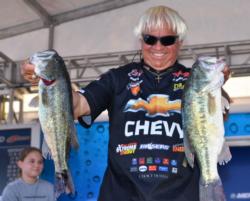 Jimmy Houston, Cookson, Okla. – One of the most recognizable names, faces and personalities in the history of the sport, Chevy team pro Jimmy Houston is making his very first Forrest Wood Cup appearance this year. A stalwart on the BASS trail for years and host of one of television’s most popular fishing shows, Houston began fishing the FLW Tour in 1997. After taking a hiatus from the Tour in 2000, Houston returned to the circuit in 2005. Although Houston is still chasing his first FLW victory, he has recorded three top-10 FLW finishes (a ninth-place finish during a 2009 FLW Series event on Lake Dardanelle; a 10th-place finish at the 2010 FLW Tour event on Fort Loudoun/Tellico lakes and a fourth-place finish this year on Grand Lake). The Oklahoma pro, who has over $160,000 in career FLW earnings, qualified for this year’s Cup as a result of his 35th-place overall ranking during the 2013 FLW Tour season.