Schools of shad, big crankbaits and better views of bass all coming to a lake near you 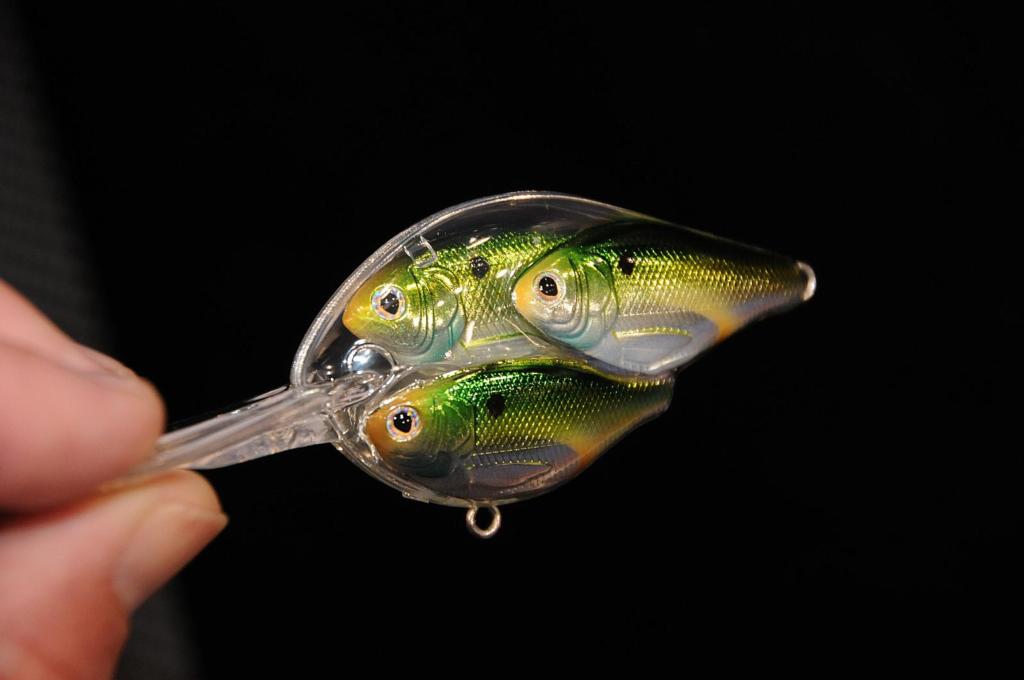 A small school of shad or a single crankbait? Live Target's BaitBall is both. Photo by Rob Newell.
July 16, 2013 • Rob Newell • Uncategorized

Indeed ICAST is a bewildering show, a fishing spectacle like no other. In truth, it would take several weeks to scour every exhibitor’s booth and truly digest the form and function of all the products displayed there. The show, however, only lasts three days, which goes by in a flash. But walk the floor of ICAST for three days and trends become apparent. And around those trends, smaller satellite trends form and so the tackle universe turns. Here’s a closer look at some the bass tackle trends from the 2013 ICAST show. To start, the shad-school illusion trend – where one lure is made to look like a school of baitfish – is big this year. We likely have the Alabama Rig to thank for this rage. But where as the castable umbrella rig raised some concerns about fair chase in professional fishing tournaments due to having multiple hooks on a line, now the object seems to be to retain the multiple-bait look within the conventional limits of traditional lures. If this sounds confusing, a good example is the Live Target BaitBall, which essentially encapsulates a shad school into a traditional crankbait or jerkbait body. These new lures will have to prove themselves on the water, but the concept of packing a super-realistic looking ball of shad into a lure body certainly has appeal.

Another shining example of the shad-school-in-a-single-lure trend is the Quadzilla from Z-Man. The Quadzilla is essentially a four-bladed spinnerbait, which borrows from the umbrella rig concept in that it presents a school-of-shad look in the water, but it only has one skirted hook just as a traditional spinnerbait does. Also, despite having four bladed arms, the Quadzilla is remarkably compact for tight-quarters casting to laydowns or bushes. And since it only has one hook being defended by four wires, don’t be surprised if this lure is actually more snagless than a traditional spinnerbait. Next up is the Booyah Boo Rig – similar in some respects to the Quadzilla, except with the Booyah Boo Rig the trailing lure is left up to the user by way of flexible wire and a snap, allowing for a traditional crankbait, lipless rattler, or a swimbait to be snapped on. Mann’s Bait Company also revealed it’s own twist on the multiple-bait, single hook design with the

Three For All. This triplet of swimbaits – with the middle swimmer carrying the hardware of a swimjig head and hook – looks pretty promising, especially when the shad spawn gets hot and heavy. Mega-crankbaits make up the next category flaming up at ICAST. Of course Strike King’s 10XD provided the fuel for the fire of this trend towards super-sized crankbaits. At first sight, the 10XD looks like some kind of lure sight gag with its gargantuan profile. But Strike King’s own Phil Marks, who designed the bait, proved to the world that his mega-mauler was no joke when he won the FLW Tour open with it at Rayburn last fall, weighing in a 32-pound, 12-ounce bag the last day to win by over 16 pounds.

Now Lucky Craft has also released a couple of behemoth crankers: The Skeet Reese Magnum Series featuring the SKT Mag 120DR (deep runner), weighing in at over 3 ounces and diving to 25 feet, and the SKT Mag 110MR (medium runner) weighing in at 2 ounces. Both of these mammoths are going to make waves, but the one to really watch here is the Mag 110MR because it is essentially a giant square bill crankbait. Traditional square-bill crankbaits are 2 to 3 inches in length and dive to about 5 feet. The SKT Mag 110MR just shattered that barrier at 4-1/2 inches long and labeled as reaching depths of 14 feet. Hello Guntersville, Chickamauga and Kentucky Lake!

Not surprisingly the monster crankbait wave has, in turn, spurred on a whole revolution of new rods designed to handle the heft, bulk and depth of these enormous baits as well as the size of the bass these baits produce. Hence, more rod manufacturers are putting a “10XD” model into their line of rods. These rods are nearly 8 feet long and specifically designed to launch 2- to 4-ounce crankbaits on 15- to 20-pound test line. Check out 10XD models from Kistler (KLX Mark Rose Offshore 10XD rod), Halo Fishing (Xtra Deep Cranking Rod), Falcon (Lowrider XD Cranker) and 13 Fishing (Envy Black Crankenstein Rod) Crankbaits were not the only thing growing up on the show floor, either. Topwater spook-type baits are getting bigger – and louder – as well. Instead of stopping at 4-1/2 inches, the new benchmark in big spook-type baits looks to be 5 inches. Understandably, big topwaters are nothing new, but what does

seem to be cutting the edge a bit in these baits is the contest to make them extremely loud (with a heavy “one-knocker” thunk) and to “spit” as much water as possible (with concave mouths). Pros have discovered that in certain situations, big bass will travel a long way to crush one of these hulking noisemakers, so big and obnoxious is in on top. Heddon’s new-ish Chug’n Spook is a perfect example of these bigger, noisier, splashier baits. The Chug’n Spook was actually released last year and is now earning a place in pros’ boxes to fit the big topwater bill. At nearly 5-inches in length and complete with the one-knocker sound, the lure gets it’s name from the fresh concave mouth that helps produce plenty of splash with the noise.

Damiki’s new Rambler 120 will get a lot of attention with its noisemaking ability, too. Checking in at 4-3/4 inch in size, the Rambler has tungsten and glass rattles as well as a concave mouth to produce a lot of racquet on the surface. Although it’s been around a couple of years, a well-kept secret among western pros in the surface-slashing department is Evergreen International’s Showerblows topwater. This lure is 5-inches in length and features more of a pencil popper-style body with a thinner, spitting mouth and broader base for a nearly 180-degree side-to-side slashing that stays in the strike zone longer with plenty of decibels to

go around. Finally, moving away from the bait and tackle end of the spectrum to the electronics end, there’s no denying that underwater camera technology keeps getting better each year. Smaller cameras, more compact color monitors and now Aqua-Vu’s amazing “Looking Glass” technology are making underwater viewing a normal part of fishing. Much in the same way photo-editing software can “clear up” a foggy image to better see what’s behind the haze, Looking Glass is a unique software that constantly “clears-up” underwater video images from Aqua-Vu cameras. This is not to say Looking Glass is going to clear up the fresh flows of the Red River, but it does a

pretty decent job of adding visibility to otherwise murky or green water. What were once just shadowy blobs far off in the distance can now be identified as to what exact species are lurking below. I’m not claiming to be Nostradamus here, but given the advancements in imaging technology on depthfinders in recent years and the remarkable improvements in clearing up video images at a distance, one would have to think that it will only be a matter of time before the two frontiers are combined into a single unit for unparalleled “vision” to what’s below in the water. Perhaps we will see that at next year’s ICAST.