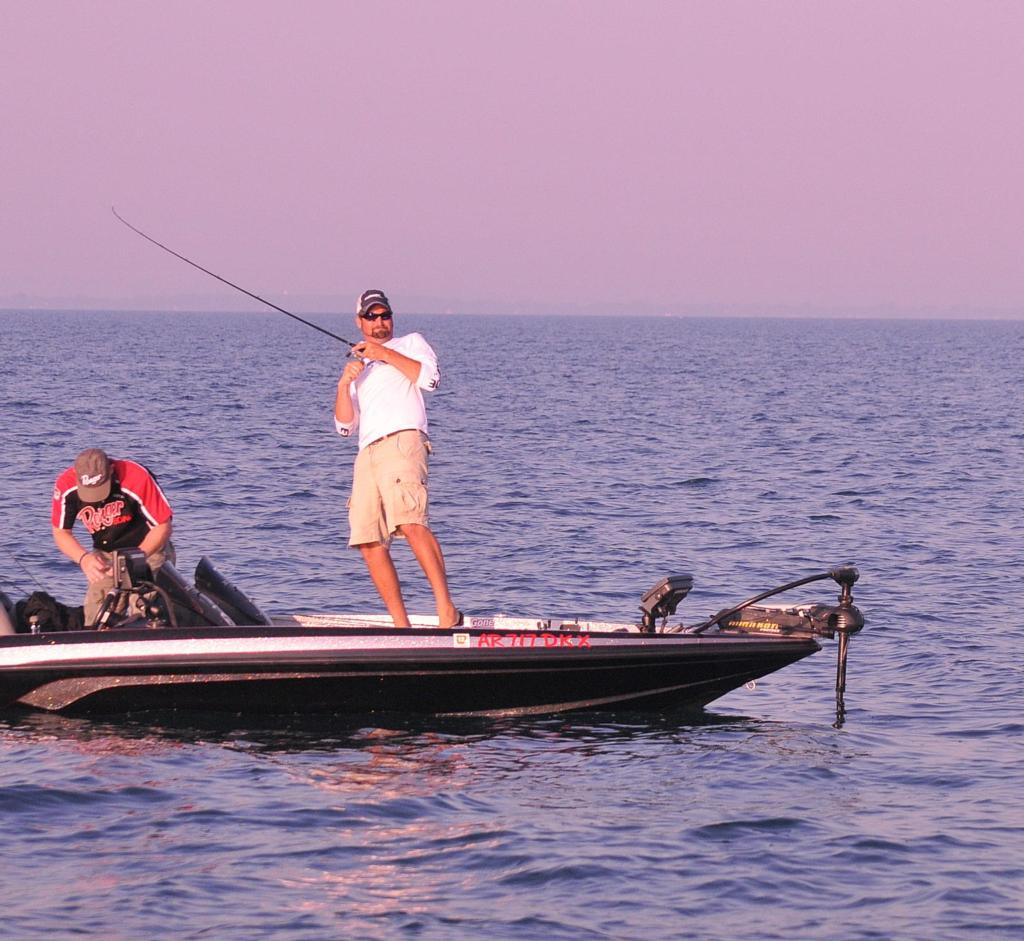 Over the past five years, Spencer Shuffield has steadily climbed the ranks of bass fishing. After getting his feet wet as an FLW Tour co-angler, Shuffield proved he was the best from the back of the boat in winning the 2011 Co-angler of the Year award. The following season he made his pro debut and experienced mixed results. This year, he cashed checks in all but one of the regular season events, qualified for the Forrest Wood Cup and finished ahead of his legendary father in the standings for the first time.

With mixed emotions, the 24-year-old Shuffield said he was satisfied with his 2013 performance.

“I don’t know; I guess I’m pleased with how it went,” he said. “Qualifying for the Cup was important, but I think the next step for me is winning a tournament. I’ve had my chances over the past two years. I mean, I would have won Table Rock if a swivel wouldn’t have opened up on a 5-pounder. I feel like if I keep putting myself in position it will happen eventually. To win one, everything has to go right; it’s not easy. I think about it every tournament when I’m idling around during practice. Is this going to be the 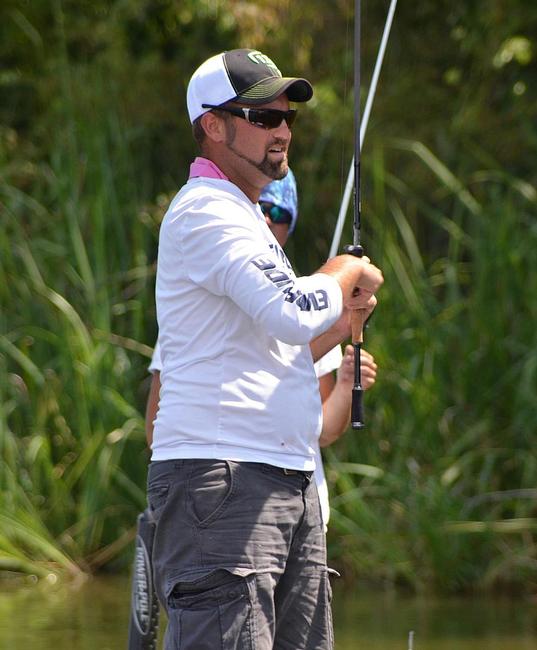 one? I think about holding the check and trophy. I want it so bad.”

Shuffield said he’s slowly learning to tweak his focus and balance fishing to win versus fishing for a payday. He said harnessing his passion to win took a different mentality.

“This year I fished a little more for checks,” Shuffield explained. “Last year I fished for big ones pretty much all day every day. This year I tried to fish for quality. I practiced for what I thought it would take to get a check. Don’t get me wrong, I still want to win. But I approached the 2012 season as though I had to win one to stay fishing. I’m doing all this out of my own pocket and I fished every tournament to win thinking it could be my last chance at being a pro.”

While Shuffield finished 12th in the FLW Tour points race, his season took some wild swings. For example, he experienced an awesome practice at Okeechobee – catching several kickers in excess of 6 pounds. Come tournament time, he caught the same numbers of bass in the same areas, but the big girls never appeared. Instead of leaving for a new area with five in the livewell, Shuffield stuck with it, thinking the next bite would be the kicker. Instead, he just wore out the 2- and 2 1/2-pounders.

A similar situation played out at Grand Lake, where Shuffield experienced the best practice day of his life on a frog and a buzzbait. Right after takeoff he hit a floating log, even though he was following the trail of another competitor. The impact knocked off his lower unit and Shuffield didn’t make it back on the water until 12:30 p.m. At that point the sun had popped out and stayed out the next day – essentially killing his topwater bite. 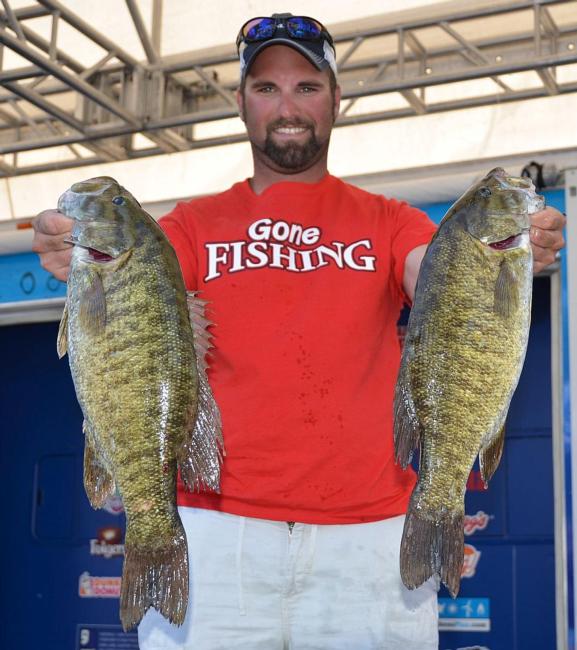 Those two touranaments were the worst finishes of his season, but he still managed to overcome adversity and avoid a bomb.

“I’ve fished my entire life, but I’m still learning. I’m not afraid to say that I made some bad decisions this year. Little decisions make a big difference out there. But I look back at some of the best pros like Jason Christie, Brent Ehrler and Randall Tharp. In their first couple years, they struggled. I think I’m going to have a much better season next year.”

While Shuffield is proud of his progress on tour, he said he’s been fishing poorly back home, a stark contrast from what he’s used to. That has taught him that he’s better at fishing patterns than spots.

“What I’ve noticed is that I can go to a lake I’ve never been to and do better than I would at a lake around the house that I fish all the time. It’s frustrating to not win a bunch of tournaments back home, but it also makes me more confident going to lakes I’m not real familiar with.”

Shuffield also credited the presence of his wife Kelsey and daughter Aubree as a stabilizing force in 2013.

“They traveled with me and I think that’s a big part of why I did better this year. Whether you had a good or a bad day, they helped me get a break from fishing. I would take my mind off of fishing for a few hours and start fresh every day.”

While Shuffield had considerable success with the Alabama rig, he was elated to see it banned. 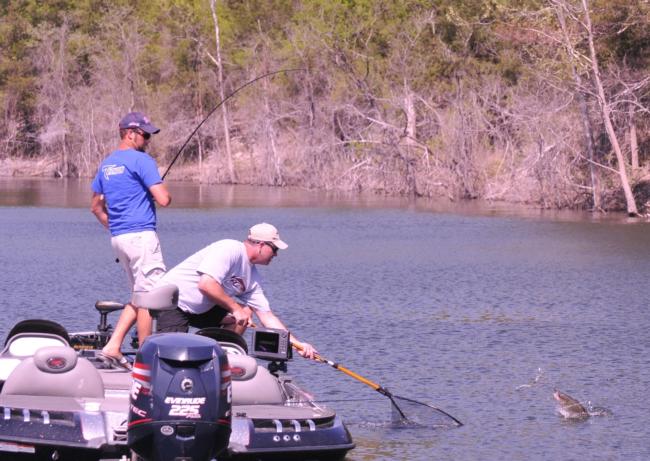 “A lot of people think I’m an A-rig fisherman. But I got good at it because our lakes set up perfect for it. Around here, you just have to throw it and that’s the way it is at every tournament. You can’t win a tournament on a football jig anymore. So I learned how to fish it and got really good. I think even won like nine tournaments in a row at one point. But even then, I didn’t want to pick it up and I hated throwing it. Now I don’t even have to think about it. I hated last year going into Beaver knowing it was going to be won on it. It’s just a dang hassle.”

Shuffield still seeks the advice of his father, but ironically, the two have contrasting fishing styles. The guidance he receives is broad and rarely has to do with specific tactics or techniques.

“Dad taught me how to fish and he’s the one that got me started, but now I’m my own man. People might think of me as just Ron Shuffield’s son, but I’m out there on my own. Any success or failure I have is of my own doing.”