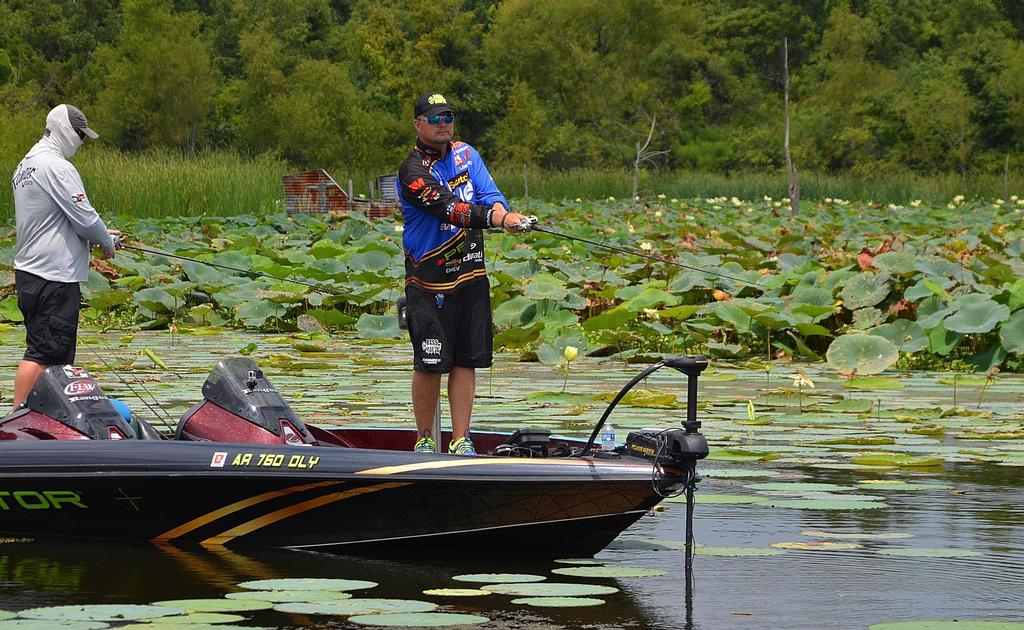 On paper, 2013 was one of the better seasons of Ray Scheide’s 10-year Walmart FLW Tour career. The Arkansas pro cashed checks in all but one tournament, finished 24th in the points race and qualified for his sixth Forrest Wood Cup. When Scheide reflects on the season, he’s pleased with his results, but there’s one 40-minute stretch he’ll never forget – a brief window that would have transformed his year from good to great.

After not making the Cup for two consecutive seasons, Scheide admittedly was in a funk. Those two years were marred with health issues as Scheide battled an extreme case of tendonitis. His arm was painful, but even more painful was not being able to power fish with a big flipping stick or a frog rod.

“During the off-season last year I had a platelet rich plasma injection,” said the Scotch Blue Painter’s Tape pro. “It’s a procedure where they take your own blood cells out and then inject them to the 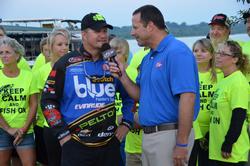 damaged area to stimulate the body to heal itself. It’s a bit of an experimental procedure; insurance doesn’t cover it. But I knew three pros that had it done (Mark Rose, Edwin Evers, Stephen Browning) and just raved about it. They all went to this clinic up in Missouri. I’m not a huge fan of surgery, but I had to do something. After the first month it wasn’t getting any better. There was some progress the second month and then it just kept getting better and better to the point where I was completely pain free.”

Scheide attributed much of his 2013 success to the surgery – not only from a physical standpoint but mentally as well.

“I couldn’t cast a spinnerbait. I couldn’t do the simple things that a fisherman needs to do to be successful. It was just everyday pain, but it also messes with your mind.”

In addition to surgery, Scheide rededicated himself to fitness – mainly cardiovascular circuit training.

“My wife and I get up early every single morning and work out at Maxx Nutrition and Fitness. It was difficult at first, but now it has become a part of our routine, part of our lives. I’ve lost 25 pounds and I’m probably in better shape now than I was before I started my fishing career. You get into your mid-40s and you begin losing your energy. Between the surgery and working out, I feel great. I’m back to fishing the way I like to fish. Being able to power fish has brought the enjoyment back for me.”

A refreshed Scheide entered the 2013 Forrest Wood Cup liking his chances. After all, he’s a river rat at heart and the Arkansas River, Scheide’s home water, fishes similarly to the Red. On day one, Scheide probed the vegetation-covered backwaters and caught a solid 12-pound, 7-ounce limit. On day two, he experienced one of those perfect storms in fishing – a rare situation where everything lines up.

He started in a backwater known as Do Not Dredge, caught a 10-pound limit and then moved to a corner of a different backwater known as the White House to frog fish. Scheide received his first bite there, a 3 1/2-pounder around noon. He upgraded and a few casts later caught another one about 2 1/2 pounds. From there, chaos ensued. 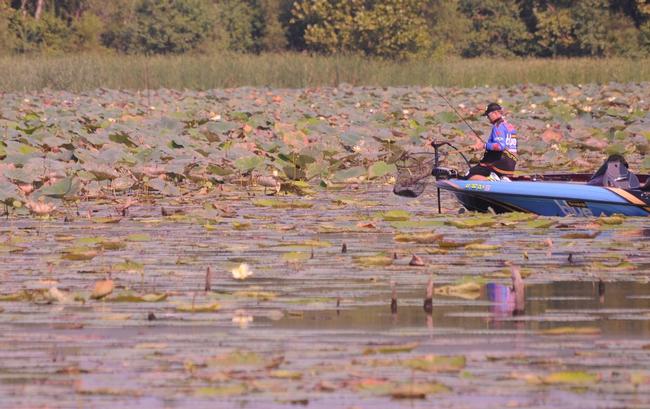 “I lost five in a row in a 35- to 40-minute span and they were all gigantic. There was kind of a high spot in the pads and all the big ones had pulled up to feed in that little area. After the first one, I was disappointed, but I didn’t feel like I did anything wrong. With the second one, I saw the pad kind of move so I was kind of anticipating the bite. I had that one on really good. I went to go get her with the trolling motor and somehow she wasn’t there. After that one I kind of pulled my hat over my eyes and rubbed my forehead. After the third one you can’t see straight. After the fourth you’re looking for rods to break. After the fifth one you just want to wake up from the nightmare.”

Scheide estimates his total weight should have been somewhere around 24 pounds and that’s being conservative.

“You’re not supposed to get those kinds of bites on the Red River. The key was making the longest casts possible over that high spot. To go back and do it over again, I don’t think I could have done anything different. When that type of bite is on, that’s my deal; I’ll choose that over anything. But it just wasn’t meant to be.”

Scheide ultimately brought 12 pounds, 12 ounces to the scale and made the top-20 cutoff. Returning to the same area on day three, those big ones never cooperated and Scheide finished the year-end championship 12th.

“I’m not satisfied, but I’m not going to complain either. Fishing is absolutely my favorite thing to do in the world. Tournament fishing is a different animal, however. The last couple years of being in pain took the fun out of it. It took me a month or so to get over the Cup, but I had a good year. I had just as much fun last year as my first year. It was like a renewed joy of fishing well and fishing healthy. I just can’t wait to get back on the water and start it again in 2014.

“We used to handle 100 or 200 shirts in a day manually,” added Scheide. “Now we can run up to 500 in an hour and the design doesn’t matter. We can handle big orders with no quality issues whatsoever. It’s been a big leap for our business. We just keep growing and growing.”