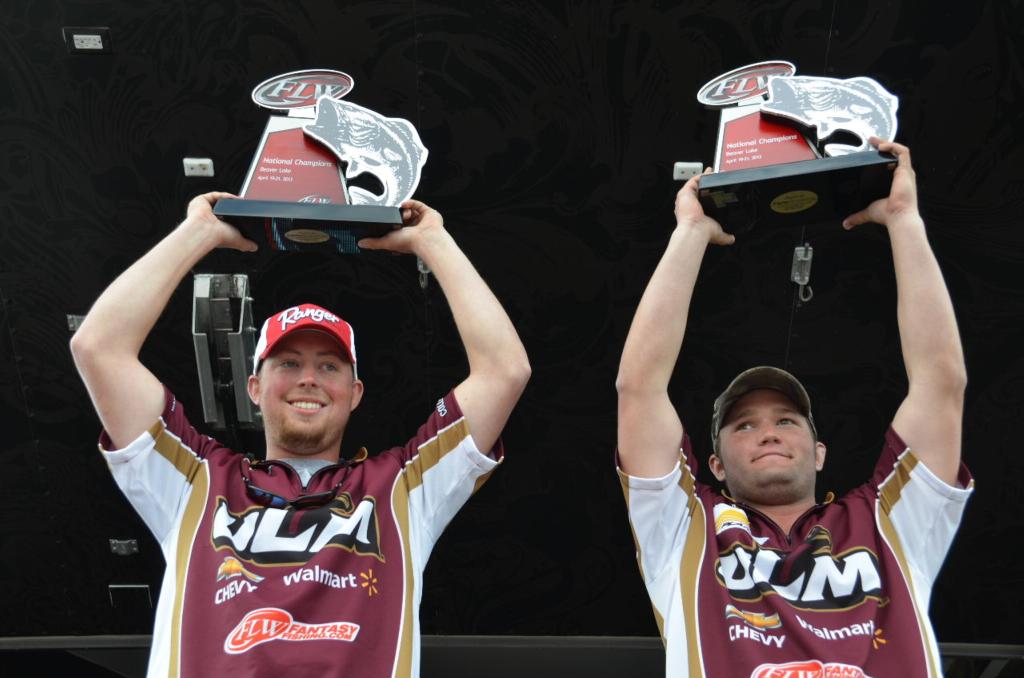 The last time the College Fishing National Championship was in South Carolina, Ryan Patterson of Kansas State won the title fishing solo on Lake Murray. This year, with the largest field ever, the National Championship is headed to Lake Keowee, a deep, clear lake in the Carolina foothills filled with spotted bass.

With Forrest Wood Cup qualification and the National Championship title on the line, anglers will have plenty of incentive to figure Keowee out. The lake’s central feature is the Oconee Nuclear Station. It sits astride the middle of the lake and the warm water it generates means that a variety of patterns can be in play at any one time. Some of the anglers who have pre-fished Keowee relate it to other places like Lake Norman or Beaver Lake but were quick to point out that there were many unique features. 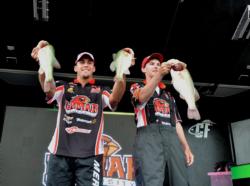 Justin Royal of Lamar University fished in last year’s FLW College Fishing National Championship on Beaver Lake and he’s returning this year with Colby Ogden, his new partner. Both Ogden and Royal have excellent records. In fact, Ogden has already notched an FLW College Fishing win in 2014 with Quinton Evans on Toledo Bend.

Royal and Ogden have never finished out of the top-18 in a college tournament. Listening to Royal talk about their pairing you could tell they had a lot of confidence in each other.

Despite the tournament being more than a week and a half away at the time, Royal and Ogden got in a week’s worth of practice on a body of water that was strikingly different than their home lakes in Texas. He remarked on the fickleness of the fish and how quick they were to come and go from a spot.

“There’s the possibility to see some big largemouth weighed,” said Royal, who thinks a total team weight of 36 to 38 pounds could be enough to secure the title. “But we were there for a week and only caught two.”

The opportunity to catch a big largemouth to anchor a limit of spotted bass will certainly be something that a lot of anglers look to do in the coming days. Considering the Lamar team’s experience, that will be much easier said than done. 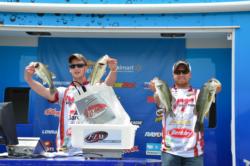 Virginia Tech has sent a team to every College Fishing National Championship since its inception but has only cracked the top-5 once. This year’s representatives are John Woodward and Ricky Kassebaum.

“I learned a lot about the lake during my practice,” said Woodward. “I really got to learn the layout of it, which I think is key. It’s very different from what I’m used to. I’m used to (fishing) somewhat deep and somewhat clear on places like Smith Mountain Lake and Claytor Lake, but nothing like this.

“The fish are really nomadic, they move around a lot and it’s all bait related,” Woodward continued. “Because it’s a power plant lake, the fish are in different stages all over the lake so it’s kind of a hit-or-miss deal no matter where you go.”

Woodward also expressed concern that the weather might put a damper on the bite.

“I’ve looked at the weather for the next two weeks and it’s not really as conducive to them moving up as I hoped. I think a lot of the fish that could have been pulling up might get pushed off because they’re going through a cold spell down there.

“The National Championship is a huge deal,” continued Woodward, who believes that the winning weight will come in somewhere around 42 pounds. “I really wasn’t thinking about it that much. I mean, I had done my research and planned, but I really hadn’t gotten that excited. But I went down there last weekend and it all came together. The past two days here at work I couldn’t concentrate at all. The opportunity it provides you as an angler is amazing.”

Somewhat on the opposite end of the spectrum to Royal and Woodward – two anglers who are part of tested teams and spent time on the water prior to the event – Dean Mullett of Georgia Southern is fishing alone and hasn’t yet practiced. Nonetheless, he expressed confidence heading into this year’s event due to comfort in his abilities as well as the seasonal timing of the championship.

“I feel good about fishing alone,” said Mullett. “I don’t really have to worry about another person’s input so it’s mine to lose or mine to win. I’m going to just go up and try my best and put it all in God’s hands and try to catch 15 or 16 pounds a day.” 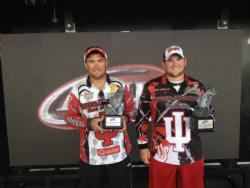 Josh Collier and Sean Gillenwater are representing Indiana University on Keowee and are also one of the teams that got a chance to pre-fish. Collier and Gillenwater won the Central Conference Invitational on the Detroit River and have crammed in a lot of fishing time together despite the fact that Collier played third base instead of fishing in his first two years at Indiana.

Collier addressed the long layoff between practice and the tournament head on.

“We had a good trip and got a good feel for the lake and how it lays out. But it will definitely change in the two weeks since we’ve been on it. But, I feel like we put ourselves in a good situation for when we go back down and have to figure it out for the tournament.

“We’re definitely excited,” continued Collier. “Keowee is a different style of lake from what we’re used to, but I feel like we’re going to be able to adapt and give ourselves a chance. We’re in it to win it. I don’t ever fish a tournament just to have fun. I’m trying to win from the moment they call my number to the moment it’s time to get off the water. This is my last chance; I want to win, go fish the Forrest Wood Cup and go out with a bang.”

Collier also took a moment to break down a key decision that each team has to make prior to the event: namely, who would fish as a pro in the Forrest Wood Cup and who would fish as a co-angler. Despite the fact that the odds are stacked against everyone in the event, this is the closest most have come, and the closest many will come, to the Forrest Wood Cup. As such, the carrot of being able to compete in the sport’s biggest year-end championship becomes more enticing with each passing day.

“Sean (Gillenwater) will be the pro if we make the Forrest Wood Cup.” explained Collier, who believes the 40-pound mark is where a team needs to get to in order to contend for this year’s national championship title. “I’d be tickled pink to be a co-angler in the Cup. Of course it’d be nice to go fish the Forrest Wood Cup on the pro side but we talked about it and he’s been on the fishing team longer and really wanted to fish on the pro side if he could.”

This year’s national championship is set to be a lot of fun regardless of whether a veteran team or a team of first-timers brings home the title. With a 49-boat field, school spirit, a difficult Lake Keowee and the Forrest Wood Cup on the line, we’re sure to see something exciting.