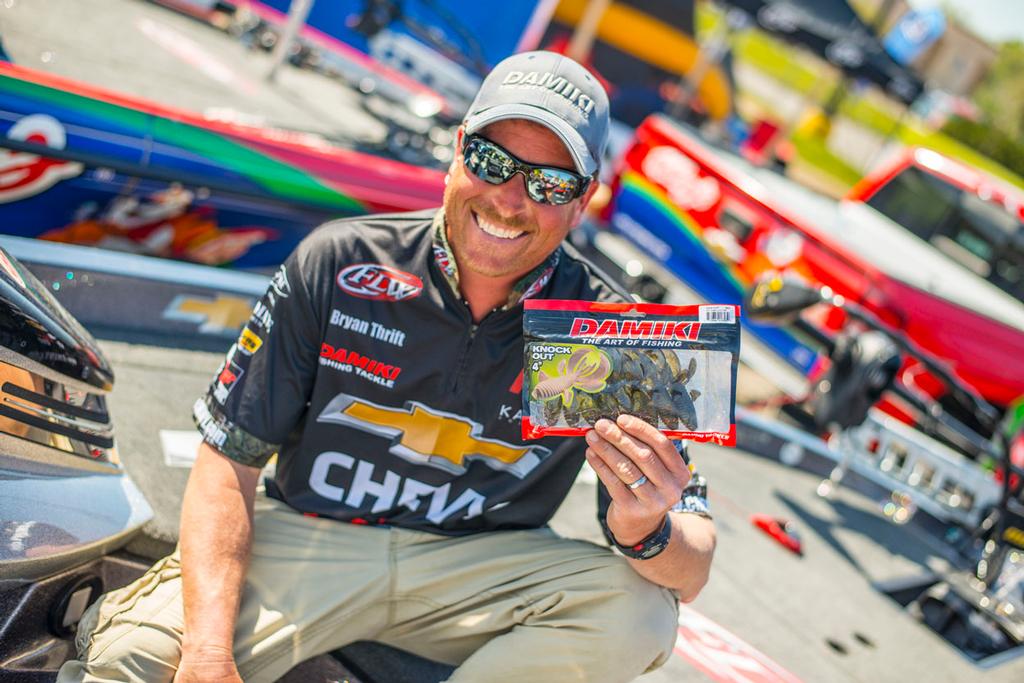 The Walmart FLW Tour event at Sam Rayburn Reservoir presented by Chevy was plagued by up-and-down weather swings that left plenty of bass a bit confused about whether or not to head for the banks to spawn.

Some pros, such as Mark Rose and Jason Meninger, parked on prespawn stopping points that they hoped would bring transitioning fish to them. Others spent most of their time running and gunning grass and wood cover away from the bank with moving lures. A third group concentrated on the bank with thorough tactics aimed at tempting bedding bass that weren’t visible in Rayburn’s dingy water.

In the end, it was Chevy pro Bryan Thrift’s protected backwater area, fished with extremely slow tactics, that held out for the win.

Here’s the complete rundown of lures and patterns from the top-10 pros at Sam Rayburn. 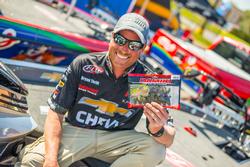 Pattern: Thrift used extremely slow presentations to tempt shallow, backwater fish from around cypress trees and scattered grass. The final day, he caught a few key keepers with a ChatterBait.

Thrift worked a 5-mile-long area in Rayburn’s upper end and expanded into new corners of it each day. 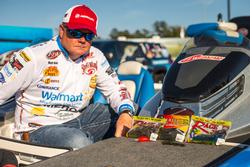 Pattern: The leader on days two and three, Rose fished a series of main-lake points with a mix of grass and hard-bottom areas. His best spot was a point that reached farther out into the main body of Sam Rayburn than the others. It was 3 feet deep on top and dropped off to a deeper grass line.

Rose estimated that the spot produced about nine of his keepers. Wind and clouds were the keys to activating those fish, though by the final day the spot was tapped out. Rose made a last-minute move shallow and caught a kicker in Sunday’s final hour, but it wasn’t enough.

“This [falling from the lead to second on day four] was just a product of running out of fish and not having anything on the bank,” Rose said. “I had to dance with the one that brought me. I couldn’t go do what Thrift was doing.” 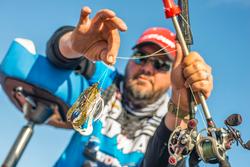 Pattern: Hackney fished the Brickyard area, a shallow backwater guarded by a massive flat full of stumps and standing timber. He targeted flat banks with a mix of two types of shallow grass. The first was submerged green grass. The second was bank grass that grew in ditches when the lake was low and that is now flooded, revealing to Hackney subtle bottom changes.

A few spawning fish were also caught by blind-casting around cypress trees, willows and other wood cover. Hackney located the beds when bass revealed themselves by waking or swirling on the jig. All his fish were caught on the jig, either swimming it or pitching back to beds.

“It [the swim-jig presentation] changed every day,” Hackney said. “At times it was a straight retrieve. Sometimes I had to hop it a little more violently.” 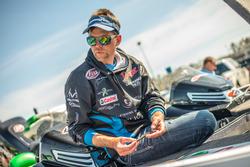 Pattern: Meninger cashed in on a single deep-water spot in the mouth of Coleman Creek that was good for about 30 bass a day. Most were spotted bass, but save day three, when he brought in only 8 pounds, 3 ounces, Meninger also caught his largemouth kickers from the spot. It was about 17 feet deep and covered in grass. The sweet spots were small patches of hard bottom that Meninger thought might be part of an old roadbed.

“It was a beautiful place, and it was just loaded with prespawners,” Meninger said. “The only thing that hurt me was the wind.”

On day three, Meninger struggled when the wind blew out of the creek and pushed the bait and bass with it. The other three days, he reported watching his depth-finder and seeing bass literally move under his boat as they slid in from where they were suspending on the main lake. He scrambled a bit in the tournament when his offshore spot went stale but caught only a few shallow fish on a swim jig. 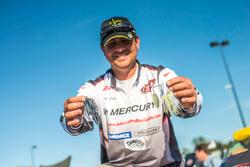 Pattern: Cox spent most of his tournament in the “deer stand” area – a shallow creek close to takeoff – but targeted small pockets and points close to the main lake. He spent the entire time on the banks, waiting for fish to move in to spawn.

On days one and three, heavy winds forced Cox to fish only in the pockets, and that limited his productiveness. The final day, he found bass flocking to the banks, caught a big one first thing in the morning, then lost six or seven in a row. He only ended up with three keepers.

“I missed a few others, and then it [the water] started clearing up,” Cox said. “They wouldn’t commit to it. I needed a little bit warmer water. It just wasn’t supposed to happen. It was so close though.” 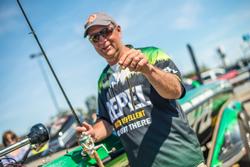 Pattern: Kennedy fished his way to the top 20 with moving lures, including a classic weedless in-line spinner called the Snagless Sally. On day three, he had to revert to slower tactics, but neither worked on day four. Kennedy finished the event with only three fish on Sunday.

“I ran out of fish,” he said about the last day. “When I got in there they were chomping. I caught five, and only two were keepers. That’s all I had at noon.”

Three- to 4-foot-deep cypress trees on the “outside” – away from the bank – were Kennedy’s primary targets. Several produced keepers two or three days in a row, but no new fish showed up on day four. He also found a small ditch within a grassy area that produced on day three but was blown out by the wind on day four. 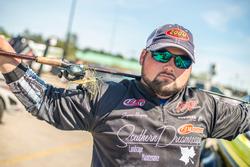 Pattern: Rampey caught day three’s biggest bag (20 pounds even) doing the same thing he did the entire tournament: fishing fast and covering as much new water in Caney Creek each day as he could.

Rampey targeted 8- to 12-foot-deep milfoil beds by winding the ChatterBait about 2 feet below the surface, within the upper fringes of the grass.

The final day, he re-fished one productive area but managed only four fish for 6 pounds, 12 ounces.

“I had a lot of fish that I didn’t see that nailed it, but they weren’t getting it,” he said about the final day. “Earlier in the tournament they were fright-training it, knocking 2 or 3 feet of slack in the line.

“I bailed out on my pattern a little too early [on Sunday],” he added. “I went to the bank. I thought they had pulled up, and they had, but they weren’t catchable yet. I probably saw 30 pounds [on beds]. When I flipped in there they just took off.” 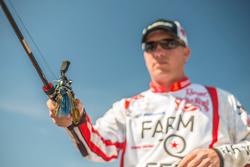 Pattern: Montgomery spent most of his tournament covering water out off the bank and targeting grass. He re-fished several areas throughout the tournament but also looked for some new water each day.

“I think they went to the bank, but I couldn’t find them,” Montgomery said. “I didn’t know the lake very well and didn’t get much practice. There are definitely some dead areas out there, but I didn’t have time to rule them out. When I found fish, I caught them.” 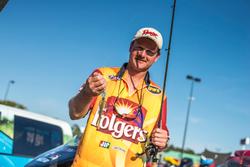 Pattern: Davis spent his first day of practice fishing a jig in ankle-deep water, but a front arrived that cooled the region and pushed his fish off the bank. He shifted out to the first drop and ended up finding a ditch that dropped from 4 to 8 feet within a hydrilla bed and a patch of deep grass alongside a spawning flat.

Those spots produced all but two bass for Davis. His bite was best early, though he saw a daily push of new fish each afternoon as the water temperature rose. The final day, the wind tore up his water. That’s when Davis flipped up his last two keepers close to the launch ramp with a 3/4-ounce jig.

“Today they went to the bank,” he said about the final day. “I scrambled today at 11. I was looking for clean water with grass. If the water hadn’t gotten dirty, I could have caught them. Today I didn’t adjust or I could have shook things up.” 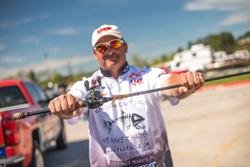 Pattern: Day-one leader Rick Cotten weighed the tournament’s biggest limit on the first day and rode that catch to the final round.

Cotten located his day-one fish somewhat at random. He made a cast away from the bank toward a stump in the middle of the pocket to try and defend his area from another boat passing through, and was surprised when he caught a 5-pounder halfway through the retrieve. Later, he caught a 7.

“I figured out they weren’t on the bank,” he said.

The big catch came on a white chattering jig with a silver blade, but once the sun came out on day two, they just wouldn’t bite white, and Cotten had no other colors. He tried swapping skirts and coloring the blade with a marker the next day, but it was too late.

“They were moving in and out,” Cotten said. “The chattering jig worked, I just wasn’t able to keep up with them.”