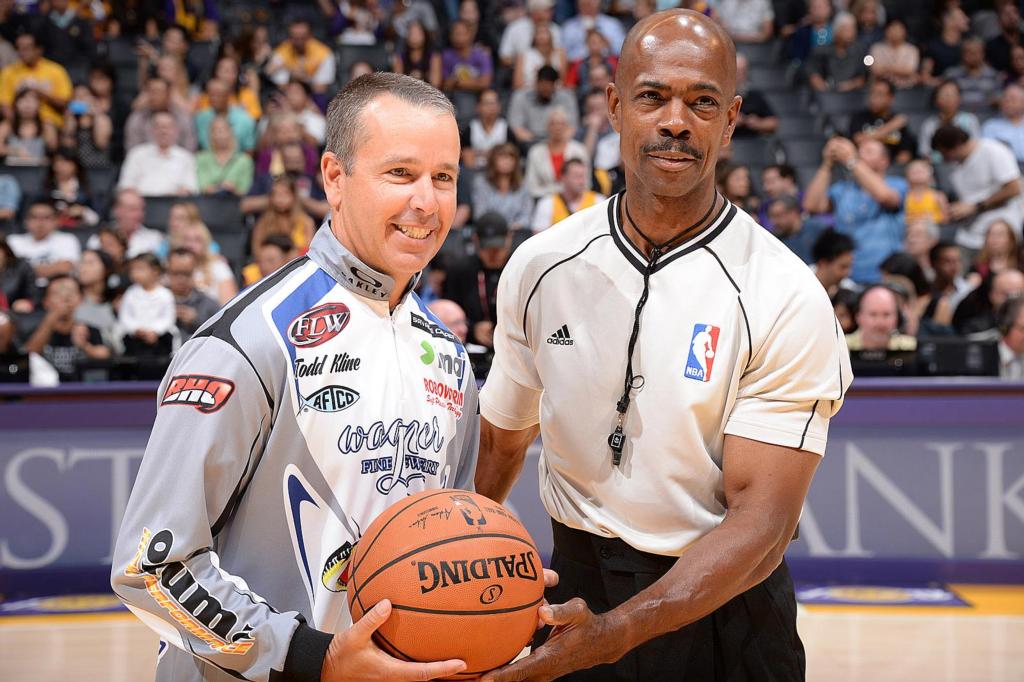 Todd Kline presents of the game ball at Sunday's Lakers game as he is honored for being the Rayovac Western Division Co-Angler Champion two years in a row. Photo by Bernstein.
October 17, 2014 • Tyler Brinks • Uncategorized

On Sunday, Oct. 19, Rayovac FLW Series Co-angler of the Year Todd Kline received a unique honor among competitors in our sport: He presented the game ball at center court before the start of a Los Angeles Lakers preseason basketball game.

As Kline walked out into the Staples Center Sunday evening, he was introduced by Lakers public address announcer Lawrence Tanter: "The Los Angeles Lakers would like to congratulate professional bass angler Todd Kline for winning back-to-back Co-Angler of the Year titles for the Western Division FLW Rayovac Tour. We wish Todd good luck in the national championships later this month in Alabama."

The Rayovac FLW Series Championship will be on Lake Wheeler Oct. 30-Nov. 1 in Florence, Ala.

Rayovac FLW Series Western Division co-angler Todd Kline has been on a roll. The former pro surfer and current Association of Surfing Professionals (ASP) commentator has won three Western Division events in the past two seasons and back-to-back Strike King Co-Angler of the Year titles. Now he’s gearing up to fish the Rayovac FLW Series Championship, but before he heads to Lake Wheeler in Alabama, Kline will be presenting the game ball at the Los Angeles Lakers basketball game Sunday night.

The honor of presenting the game ball at center court before every Lakers game is always offered to a celebrity, and based on his recent accomplishments, Kline is a worthy choice.

True to his surfing roots, Kline say’s he’s “psyched” for the opportunity.

“This is a huge honor, and I will be down there with my tournament jersey on,” he says. “I’ll give them the ball and then get a picture with some of the players.”

Climbing to the Top 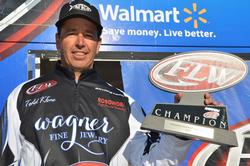 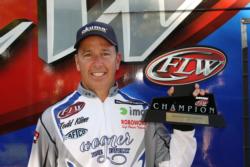 Kline’s 2014 season started where last season left off – in first place in the Co-angler of the Year standings. A season-opening win at Lake Havasu made him realize he has what it takes to compete at this level.

“That win made me think, ‘This is for real,’ and that was really my goal after winning Co-angler of the Year last year. I didn’t want to be a one-hit wonder,” says Kline.

The California Delta event in May proved to be his worst event of the season, where a 45th-place finish derail Kline’s thoughts of repeating as the points champion.

“I was really humbled at the Delta and dropped down to fifth in points,” recalls Kline.

Going into the finale on Clear Lake, Kline was set to have fun and simply try for a good finish to cap the season.

“I really had no expectations, but found I could catch good fish by cranking and was fortunate to have great partners that were in areas where I could crank and get the win,” he says. “Looking at the standings afterward I saw that I had to win that event to win Co-angler of the Year. I won it by just one point.”

Looking Ahead to Wheeler

After qualifying for and fishing the 2014 Forrest Wood Cup (he finished 10th) through the 2013 Rayovac season, Kline says that his ultimate goal going into the 2014 championship is to finish high enough to make it back to the Big Dance next year.

To do so, he will prepare like he does for every other tournament: researching on the Internet, talking with fellow competitors and sharing the boat during pre-fish with pro John Fuqua.

“John is a commercial fisherman, so he’s really good with using sonar, and that helps both of us during practice,” says Kline. “I am going to try to find something different and try to get back to the Cup.”

After Wheeler, Kline will be back traveling the world for ASP events, but he is already looking forward to the 2015 Rayovac FLW Series, which begins Feb. 5 at Lake Havasu.