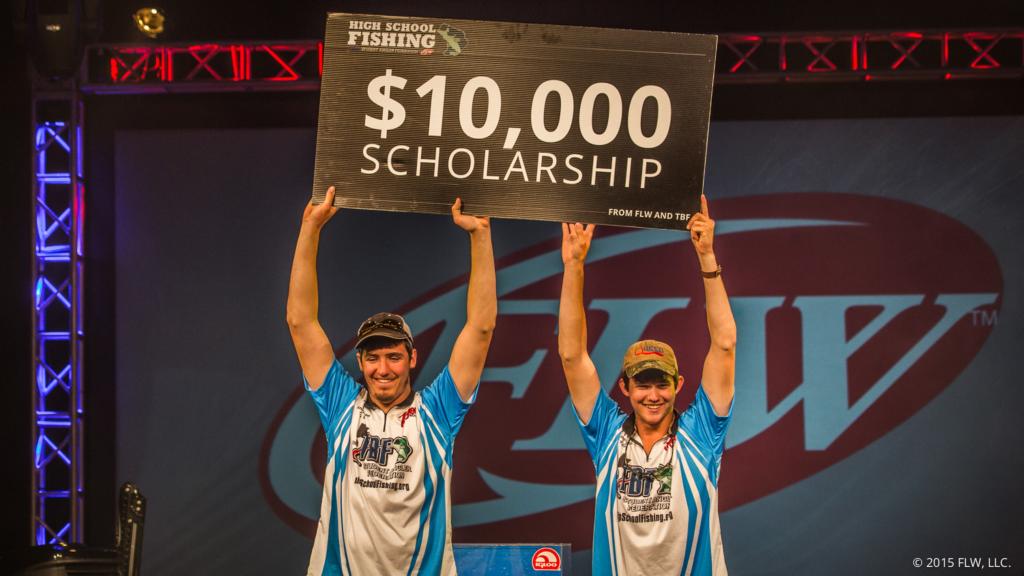 Queen and Black, representing Bandys High School in their hometown of Catawba, N.C., topped a field of the 10 best High School Fishing teams in the two-day competition. They caught 17 pounds, 2 ounces on Saturday to make it to Sunday’s final round of five teams in second place.

Then today, the Tar Heel State’s best backed it up with 17-15 to surpass Oklahoma’s Trevor Yates and Jacob Keenom, the day-one leaders, by 4 pounds, 6 ounces with a two-day total of 35-01.

Queen and Black earned a $10,000 scholarship for their win and were elated at the come-from-behind victory.

“We worked so hard for it. To finally win is amazing,” says Black, a high school junior.

“It’s unbelievable,” adds Queen, a college freshman currently attending Bethel University in McKenzie, Tenn., on a fishing scholarship. “This is an awesome feeling.”

Both days of competition, the pair keyed on windy points and docks in relatively clear water, fishing Senko-style soft baits in 4 to 8 feet of water.

“Anywhere the wind was pushing into a dock, we fished Texas-rigged creature baits,” Queen explains.

He notes that they took a “power-finesse” approach to eliminate unproductive docks.

“We fished fairly fast until we found a dock with fish on it, then worked it slow and methodical,” he says.

While their pattern yielded the winning weight, it was far from a cakewalk, especially on day two.

“We caught them pretty good yesterday, but the cold front really messed things up today [Sunday]. We got six fish all day,” says Black.

It was also a shorter day. With weigh-in 90 minutes away on the Walmart FLW Tour stage in Rogers, Ark., High School Fishing finalists had to be off the water and on their way by 1 p.m.

Still, they accomplished their goal for the final day of competition.

“We just wanted to catch the same bag of fish we did on day one,” says Queen. 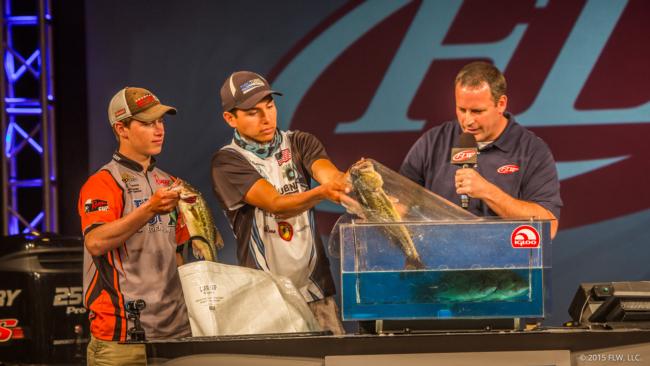 Trevor Yates and Jacob Keenom set the bar high on day one with a 17-pound, 3-ounce limit, which they caught with a one-two punch relying on an early limit from clear water, followed by bigger bites in muddier conditions.

Today, the first part of the strategy held up, but the second strike faltered, and they finished the day with 13-08.

“The cold front and clouds moved through and pushed our fish out,” says Keenom. “We didn’t get the big bite we needed.”

The Sooner standouts started the day near the Wolf Creek ramp, on a rock point with deeper water nearby.

“We caught three fish there,” says Yates, explaining that buzz baits and spinnerbaits were their weapons of choice. “Then we ran down to Duck Creek to fish clear water, wacky rigging for postspawn fish behind and in between docks along steeper banks. We got our limit, and by 11:30 hooked a 4-pounder and started to cull.”

However, when they played the big-fish card and switched to working shoreline rocks in less than 2 feet of muddy water, it didn’t pan out.

“When we tried that today, the fish just weren’t there,” Yates reports. 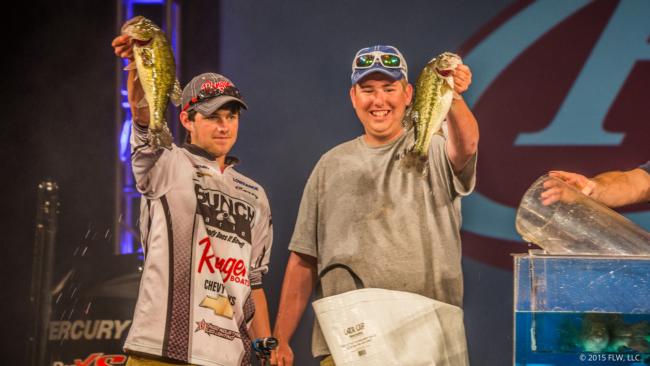 Sitting in fourth after day one with 9 pounds, 10 ounces, Jake Lee and Corey Brooks hoped to gain ground by shifting gears from muddy to clear water.

“Today we ran down to clear water, but only stayed for an hour and a half, hoping for a couple of big bites,” says Lee. “Then we went back to the mud.”

The move quickly paid off.

“Within 15 minutes of getting back to our comfort zone we had two fish,” he grins. “We caught No. 5 around 11:30 and culled three times after that.”

They remained faithful to the dirty water the rest of the day, casting square-bill crankbaits in shallow water along banks blessed with wood or other cover.

Their tactics yielded a very respectable 15-15 limit, and while the pair ultimately fell short of first, they had no regrets.

“It was a great experience,” says Brooks. “I’m just glad TBF and FLW put this together for us.” 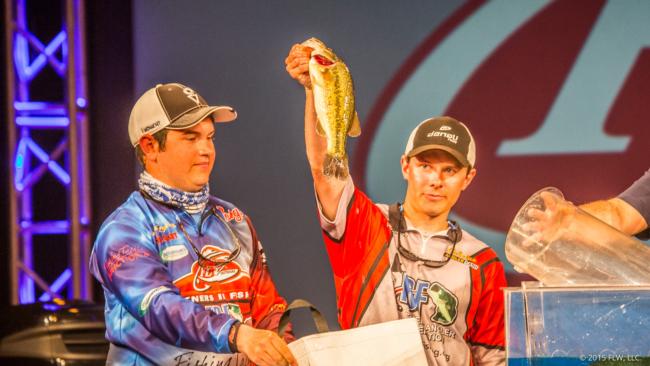 Zeke Gossett and Ryan Shields left the dock on day two in fifth place with 9 pounds, 6 ounces and hoped to charge the leaderboard by changing their strategy.

“We pretty much scrapped our game plan,” says Gossett. They switched from sight-fishing clear water near the dam to throwing square-bill crankbaits around stumps and laydowns along vertical banks in muddy water farther up the lake.

“We wanted to make a big move, but it just didn’t happen,” Gossett adds.

Instead, they sacked three fish for 8-02. But even so, they remain grateful for their trip to Grand Lake.

“I’m thankful to be here,” says Shields. “This is the best high school tournament I’ve ever fished.” 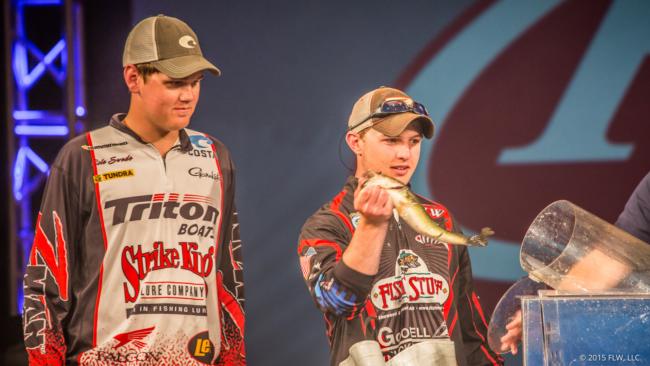 During pre-fishing, Chase Myers and Cole Swede crafted a program targeting postspawn fish with 1/2-ounce jigs tipped with craw trailers in 8 to 15 feet of water on points sweetened with chunk rock.

They believed it would produce 13 to 15 pounds per day in competition. But when strong southwest winds threw them a curve on day one, the bite stiffened and they brought 11-13 to the scale.

Wind again was a factor on day two, when they added 4-06 to their total.

“We had some spots we didn’t hit yesterday that we wanted to fish today, but the wind kept us off of them,” says Swede. “We didn’t fish clean today, either, and that hurt. We lost fish and broke some off. We could definitely have done better.”

Myers agrees, but notes that having the final weigh-in on the FLW Tour stage helped ease the sting of the bass that got away.

“When you look up and see all the people, it’s a shock,” he laughs, admitting that the experience left his passion for competitive fishing burning brighter than ever. “Our first tournaments start next week, and I can’t wait to start all over again.”