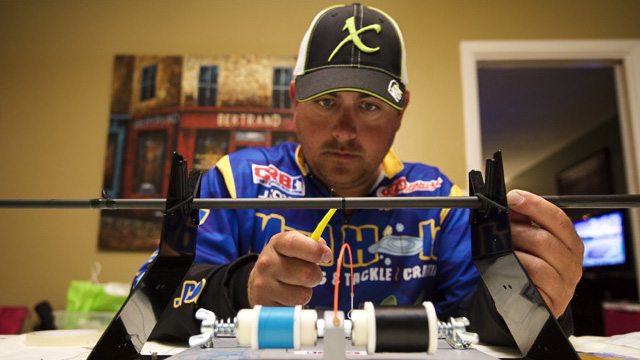 In winning the Forrest Wood Cup from an aluminum boat, John Cox proved his “my way” disposition. A deeper look at the Florida pro’s regimen reveals a key preference that further substantiates the premise: custom rods.

And we’re not talking special order signature series models that everyone eventually can purchase. No, John Cox fishes with the exact rod that John Cox wants to fish with because he builds each one himself.

Basing his creations on the MHX rod blanks from MudHole.com, one of his primary sponsors, Cox even takes his craft on the road, where he routinely tweaks rods or builds new ones based on particular tournament needs. The process, he says, is all about precision, not pickiness.

“Just buying a rod that’s not custom-built is like buying a pair of shoes that don’t fit. It’s not comfortable,” he says. “Being able to tweak a rod to fit a certain bait or a certain line gives you better control over your fishing.”

Case in point, at the Cup, Cox threw a frog on the same rod he uses as a jig-pitching rod, but with some modifications. Initially, he favored a shorter handle for roll-casting the bait under trees, but a handful of disappointments spurred him to make a key adjustment that greatly improved his game.

“I loved casting, but I wasn’t getting the hook in them even though I was drilling them,” Cox recalls. “What I realized going into the Cup was that I really wanted the handle to be a little longer. I wanted to have a little more leverage.

“I wanted the reel to be a little farther up, and I moved it up probably 1/2 inch from where I had it before. It completely changed that rod. It allowed me to get such a better hookset, and it helped me avoid losing fish.” 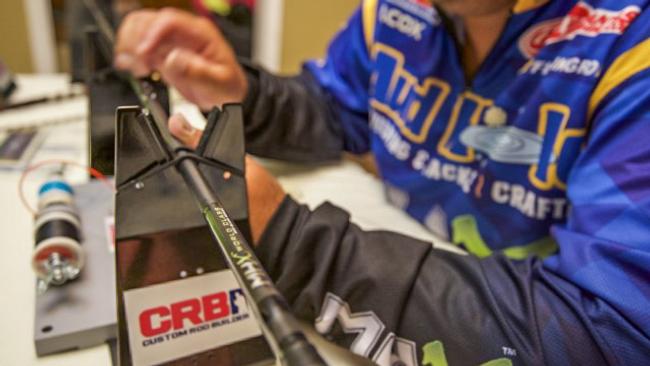 With about three years of custom-building experience, Cox says he’s comfortable that he can create a tool for each task. However, he’s constantly sharpening his skill.

“Rod building is like fishing. It’s something you can learn on every time you do it,” he explains. “It’s not something where you learn it and you’re done. You’re constantly learning new stuff.

“You might say, ‘Oh, I need to shorten a handle up here, or I need this handle a little longer so I have more leverage to pull them out of the weeds, or I need to stack more of the guides toward the tip of the rod because the rest of the rod really doesn’t bend.’”

Lately, he’s been focused on dialing in particular guide placement. For example, using larger guides and decreasing the number he places on a blank decreases friction, reduces line wear, and, in some cases, increases casting distance.

Conversely, a higher number of smaller guides mean more contact points with the blank and greater rod sensitivity. Cox prefers the latter setup for subtle bite detection with baits such as football jigs, as opposed to a more visual topwater presentation.

“There are just so many ways you can learn to perfect your fishing more and more every time you build your own rod,” Cox adds. 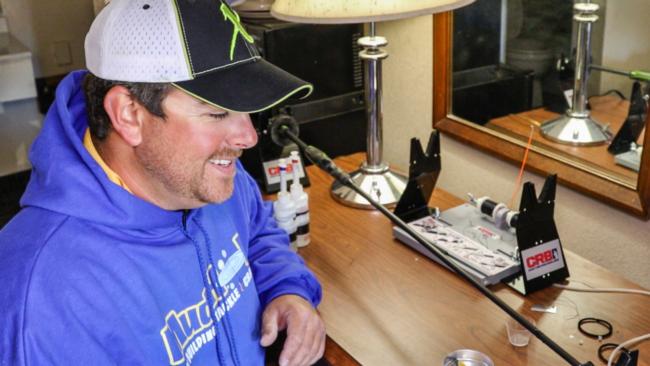 The best part about building your own rods is immediacy.

“If you have another blank you can build it right then,” Cox says. “When I build a rod in a hotel room, it takes me about an hour. I’ll put it on the dryer, let it dry overnight and grab it the next morning. It may be a little tacky, but it’s read to go.”

Eliminating creative delays is a definite plus, but so is the ability to handle repairs on site and keep your gear in the game.

“Busting a guide off is the worst,” Cox says. “You’ll start sliding that rod out of the rod box and pop off a guide. When you get back at night, you just cut it off and put on another one. It takes like 10 minutes and you’re good to go. You’re not going to have a downed rod.” 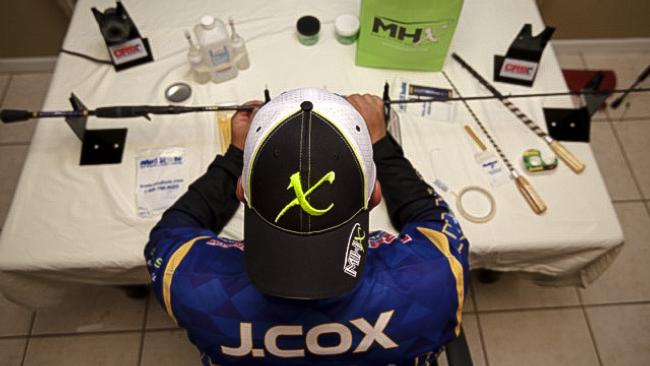 Cox typically carries a half-dozen or so blanks appropriate for an event’s likely needs. He stores them in a rod tube or the original shipping container.

He also carries a shoe box-size plastic storage bin packed with handles, reel seats, grips and guides. Of the latter, Cox says he mostly uses double-foot No. 6 guides in the first position nearest the reel and No. 5 guides to the end.

“I also carry tons of tips,” he says. “Honestly, I probably change two tips in a season. It’s not something that normally happens, but every now and then you pop one off. I bring tips, a lighter and rod tip glue with me on the boat, so I can change it right there and it’s ready to roll.”

He mostly keeps his finely tuned rods for personal use, although he once built a technique-specific flipping rod for a buddy that ended up winning a local event with the custom stick. 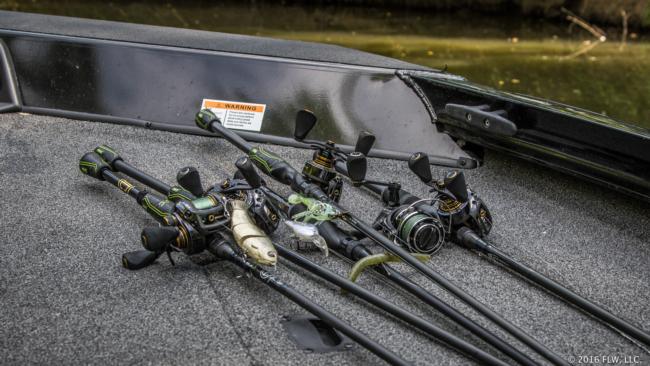 Cox admits the rod-building craft is addictive, but the rewards can be substantial. Mud Hole sells John Cox signature series kits that offer a convenient entry point for the ambitious do-it-yourselfer.

“These kits have everything you need so you’re not having to guess,” Cox says. “It’s a really good starting point, and then you can fish and see what you want to customize. My kit is perfect to me, but someone else might want more or fewer guides or a longer or shorter handle.”

Cox advises beginners to immerse themselves in each step in the process, accept the learning curve and strive to develop personal style.

“The main thing is that with the two-part adhesive for handles and the two-part rod finish, make sure you mix them really thoroughly,” he adds. “Take your time on the first one, and learn the process. Once you get that first one done, it will really open your eyes to how easy it is, and then you can really start making even nicer rods.”