How the Ontario pro earned his third Northern Division AOY 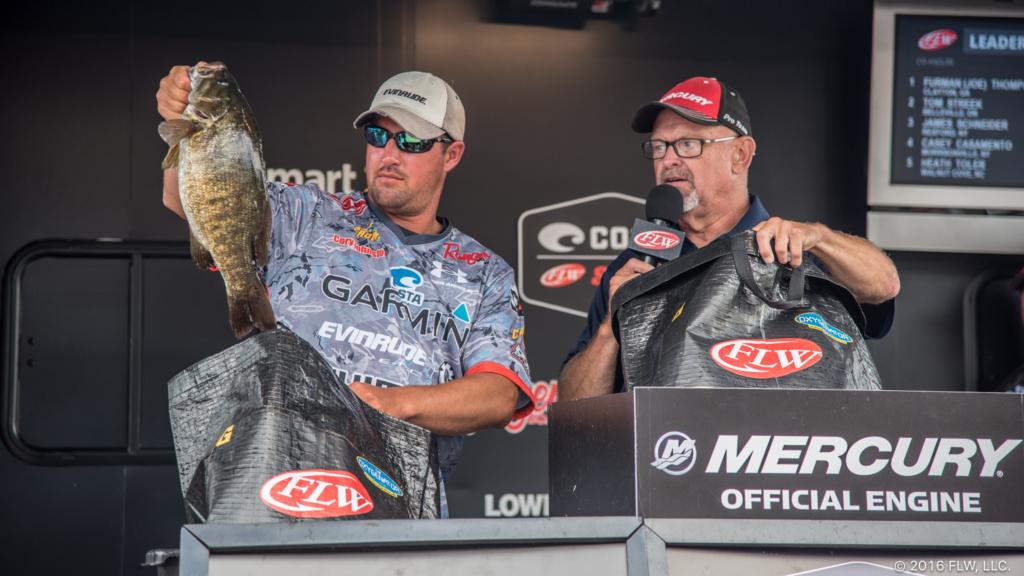 After taking his first Walmart FLW Tour season in stride and knocking down a 29th-place showing in the Angler of the Year race and earning a Forrest Wood Cup berth, Ontario’s Cory Johnston finished off his regular season south of the border with a win and a Strike King AOY title at the Costa FLW Series Northern Division event on Oneida.

A run of dominance

Though brothers Cory and Chris Johnston’s success on Tour has shocked many down south, the Triple-A success they’ve enjoyed across the Northern Division has had Costa FLW Series Tournament Director Ron Lappin warning of their arrival for a long time.

Between them, the Johnstons have notched 19 top-10 finishes in the Costa FLW Series since 2009, and Chris has won the AOY title once (his rookie season) and finished second twice more (including this season), while Cory has been AOY three times (2011, 2015, 2016) after making it back-to-back titles at Oneida this year.

Going back-to-back (with wins in each season for good measure) is plenty cool, but Cory’s third title is also historic by some measure. Nobody else has won more than two at the Costa FLW Series level. As impressive as three titles is, the list of pros with two titles to their name now looking up at the elder Johnston brother is truly stunning: Glenn Browne, Jimmy Reese, Jeff Michels, Todd Castledine, Dave Lefebre, Stephen Johnston (no relation) and Dan Morehead.

Now, plenty of all-star FLW Series pros leave the circuit entirely once they move up past the Triple-A level, but that doesn’t take much of the shine off the achievement. All told, Cory now has the upper hand over a group that has done just about everything you can do with FLW short of winning the Forrest Wood Cup.

When Casey Smith joked on stage at Oneida about winning the “non-Johnston division” AOY trophy he might have had a point. If Cory keeps up his current pace the Northern Division might be his for a long time to come.

Two for One – The story of the Johnston brothers

Cory Johnston got the season off to a running start by finishing 12th at the Potomac River and simply kept on improving from there, earning fourth at 1000 Islands and then the win on Oneida. 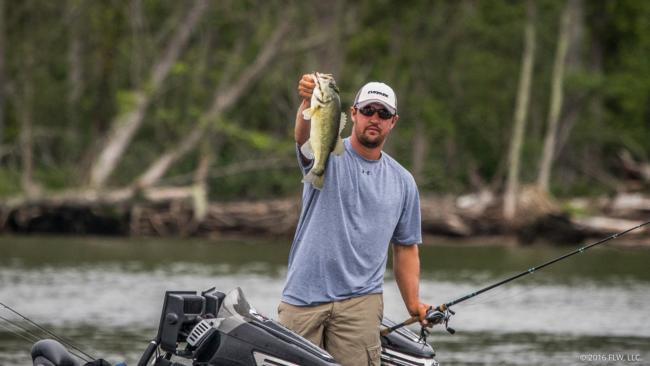 At the Potomac, Johnston started hot in fourth place but fell to 12th after struggling on the second day.

“I was on really good fish right from the first day of practice,” says Johnston. “I found them out in the grass, not in the real thick stuff. I was casting to catch them, not flipping. And for the most part I caught them like that on the first day, but in one of my spots the rain had muddied it and made it real dirty.”

On the second day, Johnston says that his casting area failed to produce, so he moved to the Greenway Flats to flip grass.

“I usually flip with a 4-power G. Loomis GLX flipping stick, but I broke it the day before and I had to switch,” says Johnston. “I switched to a 5-power G. Loomis NRX, and the rod had a much stiffer butt section on it, and it was so powerful I was ripping a hole in their mouth when I was setting the hook. I lost four 4-pounders on day two at the Potomac. I had the bites to contend for the win. I just didn’t capitalize on the bites that I got. I went down to a 4-power NRX for the Tour event on Champlain and never lost a fish on the jig the whole time.”

Top 5 patterns from day one on the Potomac 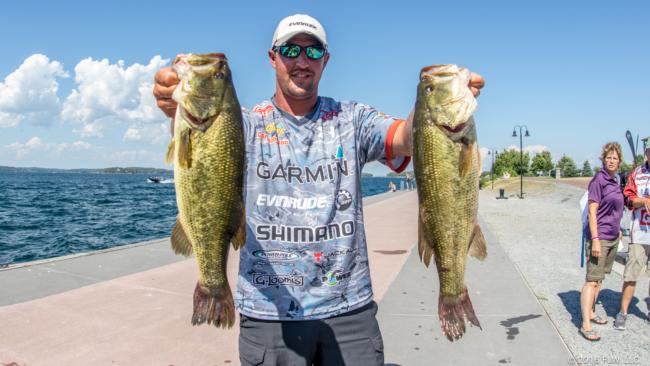 “It’s nice to have a good tournament at home, especially a big-money tournament, and every tournament out there we expect to win,” Johnston says of his 1000 Islands tournament.

Some might call for Johnston to be a little more humble, but he’s got the track record to back it up at the 1000 Islands.

There, fishing along the U.S./Canada border, the Canadian pro plied a drop-shot on Lake Ontario on days one and three of the tournament, but was forced to mix in largemouths to his game plan when the lake was put off-limits on the second day due to high winds.

Johnston might have had a shot at an even better finish if the lake hadn’t been put off limits. Because Chris was doing better at the time (he finished in second), he took the brothers’ best area of the St. Lawrence River, so Cory went out and caught 18 pounds anyway.

“I would have liked to be able to go out on the lake every day, but it was probably a good call by Ron,” says Johnston. “There would have been 8- or 10-footers out on the lake that day, and I’ve been out in that, and that’s how stuff gets broken. It’s still pretty cool. We wanted to be able to do 1 and 2 on the 1000 islands, but I’m sure one of these tournaments we’ll do it.” 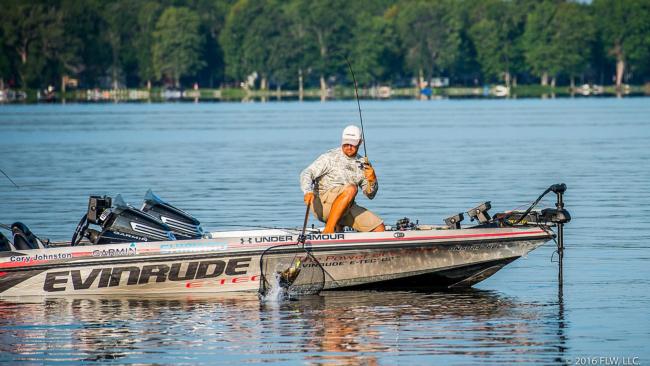 The crowning achievement of the season was Cory’s tour de force victory at Oneida Lake. AOY lead in hand, he showed up to a lake he’d never fished before and never relinquished his spot atop the standings, moving into the tournament lead on the second day and closing it out with the biggest bag of the day in adverse conditions on the final day.

If the brothers’ first year on the FLW Tour proved anything, it proved that they’re a force whenever bass are shallow, and Cory showed that theory off again at Oneida. As his competitors plied offshore shoals with umbrella rigs, he broke out the light tackle and went to work on isolated cover up shallow that harbored some big summertime bass.

“We’ve never been here before, and it’s fun to go out and learn a new lake,” Cory says. “When you’re somewhere you haven’t been before you’re not going into the lake with a preconceived notion of what the fish were doing last time there. You can really figure it out and zone in on them real good.”

In the end, a clean slate and a pile of skill produced Cory’s second tournament win in two years and his record-breaking AOY title. 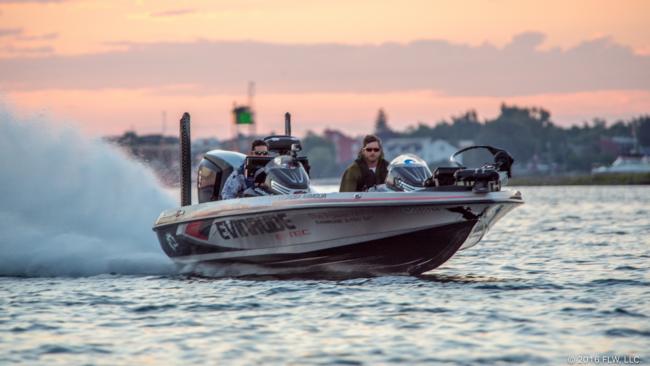 There’s more work to be done

Even with the title in the bag and the FLW Tour season complete, there’s still plenty more to be done for Cory Johnston. Back home across the border, the tournament season is still in full swing, and there are checks to be cashed there. In just the few weeks since Oneida, Chris and Cory have combined for a win, fifth and 13th in local competition, and there’s more on the horizon.

The biggest event coming up is the Costa FLW Series Championship on Nov. 3-5 at Table Rock Lake in Missouri, where there are 2017 Forrest Wood Cup berths on the line and the promise of $50,000 and a new Ranger for the winner.

“We stopped there before the Beaver Lake Tour event for two days, and we were sight-fishing and took a little tour around to see some of the lake,” says Cory. “I haven’t put a lot of thought into yet. We’re not really guys that do a lot of research on the Internet. We just back the boat in and figure it out.” 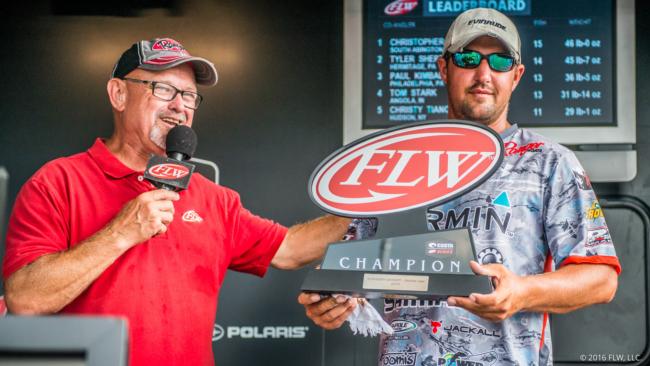 For winning the 2016 Costa FLW Series Northern Division Strike King Angler of the Year award, Cory Johnston earned a $2,000 prize package that includes paid deposits for the 2017 season. The top 40 pros and 40 co-anglers in the division standings qualified for the Costa FLW Series Championship.