How to handle bass schooling on small baitfish 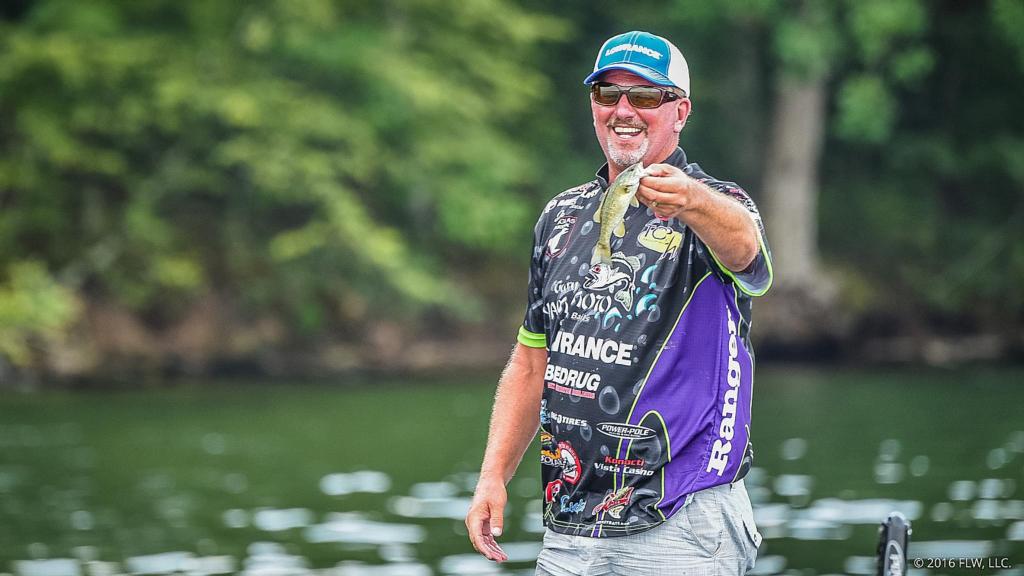 Late summer can be a difficult time to catch bass that have seen every lure on the planet at this point. Add to that the fact that a lot of the lakes in the country are now loaded with young-of-the-year shad and things can get downright tricky.

Recently, the Forrest Wood Cup on Wheeler Lake was a prime example of this, yet many pros still managed to outsmart schools of bass that were gorging themselves on tiny shad. We decided to pick the brains of a few Tour pros to see just how they trick bass into biting when they get zoned in on small bait. 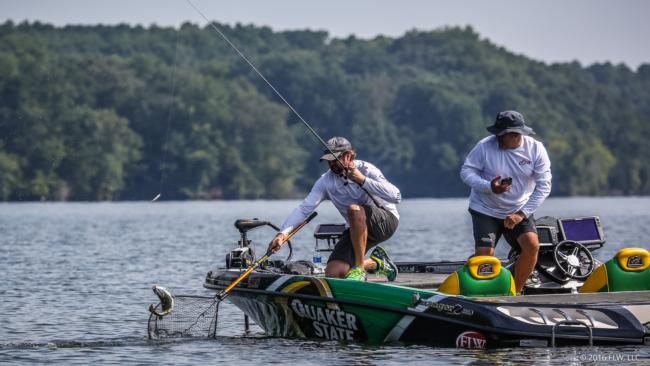 Quaker State pro Matt Arey has had years to hone his skills chasing bass preying on small bait around his home waters in North Carolina. In that time he has found that one of the best tools an angler can have is the right equipment.

“A lot of the lakes in the country encounter this situation where the majority of the forage is about 1 1/2- to 2 1/4-inches long,” says Arey. “When bass are chasing small bait this time of year there are really small windows when you can catch them. Making sure you have the right rod and reel setup is very important so that you can capitalize on the windows you do have.”

Basically, you need be ready to fire a cast at a moment’s notice and land the bait precisely where you want it.

“It’s like a great white shark in a tank where there’s a bunch of T-bones floating and you’re trying to get them to eat your bait,” Arey adds. “I’d say 85 percent of the time they come up and isolate one shad from the school. If you don’t land your bait on top of their head when they do that you aren’t going to get bit.”

For making precise cast Arey prefers to throw tiny baits on a 7-foot, 4-inch Okuma Helios medium-light spinning rod with 6-pound-test P-Line FloroClear. At times me may even go down to 4-pound-test if necessary.  Many anglers would opt to throw such a setup with light braid to a fluorocarbon leader, but Arey chooses not to most of the time. He prefers straight FloroClear because it eliminates having a knot that would connect braid and fluorocarbon from catching on any of the rod guides, leading to optimal distance and accuracy.

As far as baits go for targeting schoolers, Arey brings the kitchen sink and then some.

That is reflected by his choice in baits. Anything from a small swimbait, weightless grubs, jerkbaits, Rooster Tails, crappie grubs, squarebills, Rat-L-Traps, scroungers and more have worked. He even drags a Texas-rigged plastic and drop-shot along the bottom to give the fish something with a different look when they aren’t up schooling. 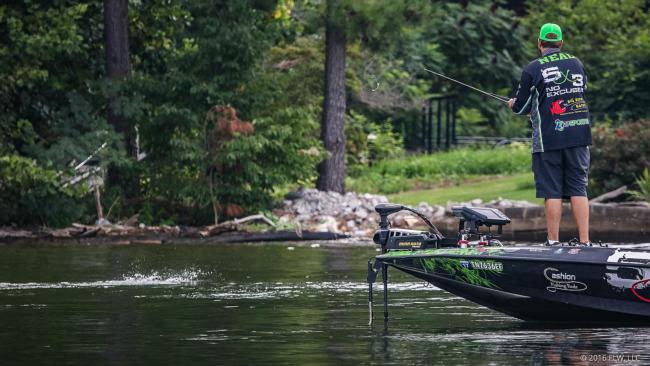 Michael Neal dialed in the schooling bite better than anyone else in the field during the Cup and rode it to second place. Small baits are definitely the way to go when trying to mimic small shad, however, Neal likes to put a different spin on it.

Experience on the Tennessee River has taught Neal that when fish are schooling, a topwater is the best way to a big bite.

“I always like to have some sort of topwater walking bait tied on this time of year,” says Neal. “They are just a great bait to have on to cover water and seem to be a better way to get bigger bites.”

Whether it is a Lucky Craft Sammy, a Gunfish or the old standby – a Heddon Super Spook – Neal isn’t too picky about his bait, though he does pay attention to color.

“Around home I like a bone Super Spook because the water isn’t so clear. If the water is kind of stained I like brighter colors and rattles.

“On the other hand, if the water is cleaner, like it was on Wheeler, then I like a clear-colored Sammy. In that situation I also don’t want any rattles.

Neal notes that under the right conditions, a well-placed cast should produce a fish no matter the topwater, but if things get tough he adds a slight modification.

“At the Cup I used a clear bait because the fish were so focused on those little shad that I didn’t want them paying attention to the bait itself. That’s why I added a No. 2 Gamakatsu feathered treble hook to the back of the bait. I could tell that feather is what the fish were keying on because every bass I caught on that bait had the feather in their mouth.”

Neal keeps his topwater setup pretty simple. He likes a 7-foot, medium-heavy Cashion rod matched with an Ardent Apex Grand reel (7.3:1 ratio) spooled with 50-pound-test Sunline FX2 braid. He likes straight braid because he can get better casting distance and doesn’t have to retie as often – which helps a lot when the school comes up fast and furious. 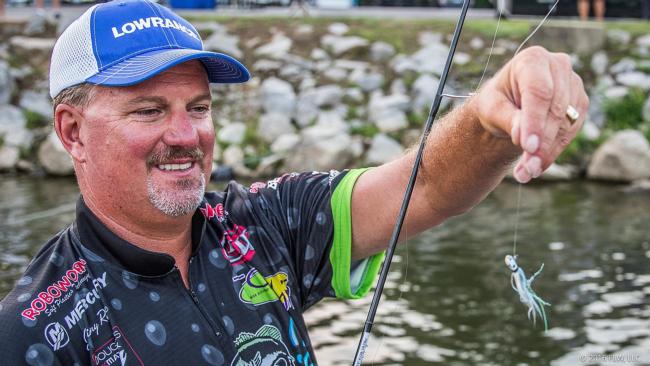 Jimmy Reese threw just about everything he could to schooling bass at the Forrest Wood Cup leading to an 11th-place showing on Wheeler Lake. While dealing with small bait isn’t something Reese is used to doing out west, he dialed it in fairly quickly with a unique tactic.

“Around home I’m used to dealing with shad that are 3-, 4- or 6-inches long,” says Reese. “The Cup was my first time experiencing fish keying on bait that small.

“There were two things I noticed to be pretty important. The first was obviously matching the hatch, but the second was having a semi-erratic presentation.”

What Reese figured out was that a homemade fly (similar to a hair jig) that weighed about 1/8-ounce and was about 2-inches long was the deal. White and blue as well as white and green are his main choices.

“I’d make a long cast and reel it back in on a medium speed retrieve,” Reese explains. “I wanted to keep it right below the balls of bait.”

Reese notes that some of the best areas to locate big pods of bait and bass are flats with deep water nearby. He likes to bounce around from school to school letting areas rest when he can. The California pro also mentions that he is a fan of keeping his bait in the water as long as possible.

Fishing right now can get a little frustrating due to the heat and how dialed in on tiny baitfish the bass are. If you want to capitalize on some fantastic opportunities for both numbers and size of bass then downsize your offerings and keep your eyes peeled for schoolers – you might just be surprised by what you find.