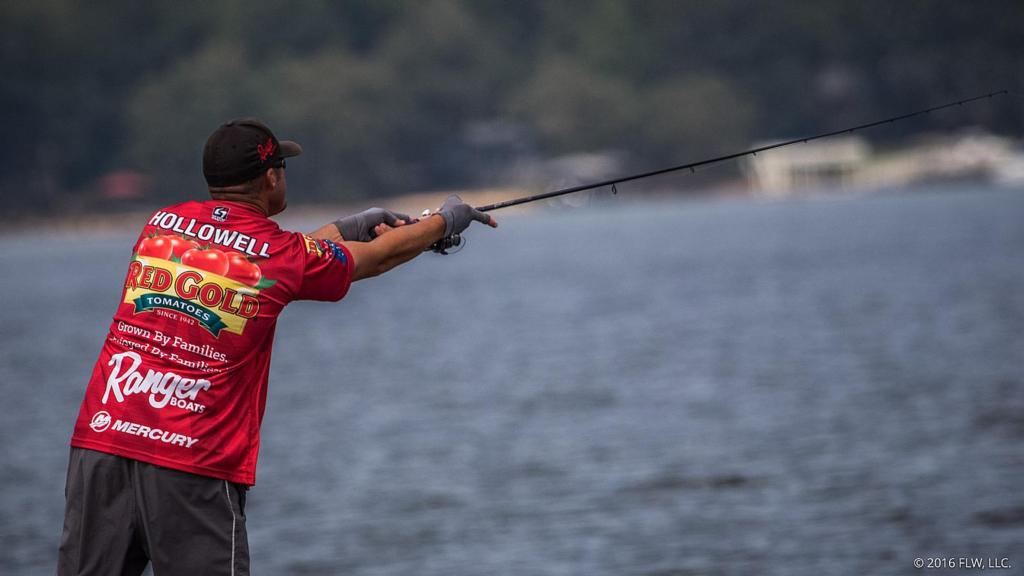 Late summer can be a tricky time to really dial in on a consistent pattern due to the tug and pull of the summer-to-fall seasonal switch. Hot days followed by cooler nights, along with other factors, can play tricks on both the bass and those chasing them.

With the seasons changing, all it takes is a readjustment in techniques to get back on the right track – so say the five Walmart FLW Tour pros we talked to. Their late-summer transition strategies can help you put fish in the boat right now. 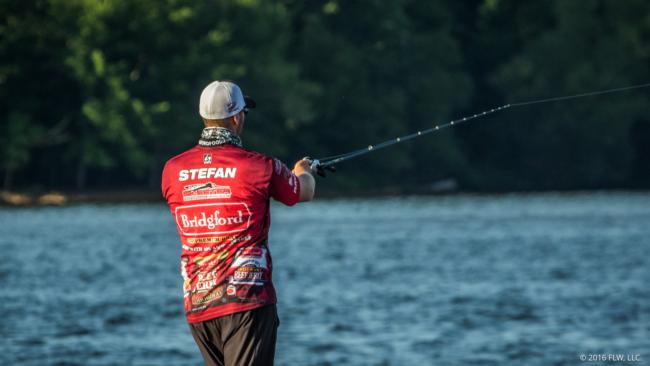 For Matt Stefan, a 1/2- or 5/8-ounce Dirty Jigs Luke Clausen Casting Jig is his go-to for late-summer fishing in Northern natural lakes and river systems.

“If I’m on a natural lake, I can use it while fishing deep weedlines,” he says. “If the lake has matted-up milfoil, then I can throw the jig in there as well. And if I’m on any type of river system where I’ll be fishing cutbanks or wood with current, I can fish it there too.”

Stefan’s approach to fishing grass and wood cover is fairly straightforward. He casts a natural-colored jig – either green pumpkin or brown to imitate a bluegill or perch – to the cover, and uses varying retrieves to figure out the best action to trigger a bite for that day or even during that hour. Once he feels the tug he is looking for, Stefan always takes note of where it was, so he can capitalize on his find.

“I don’t know if people just overlook it or just don’t key in on it, but most of the time the fish are actually grouped up pretty good. So much so that if you are fishing a weedline, you will want to throw your jig right back into the spot that you just caught that fish,” says Stefan. “You can catch three to five fish off of the same exact spot, but if you miss that little nook or point in the weedline by 5 or 10 feet, you are not going to get bit again.” 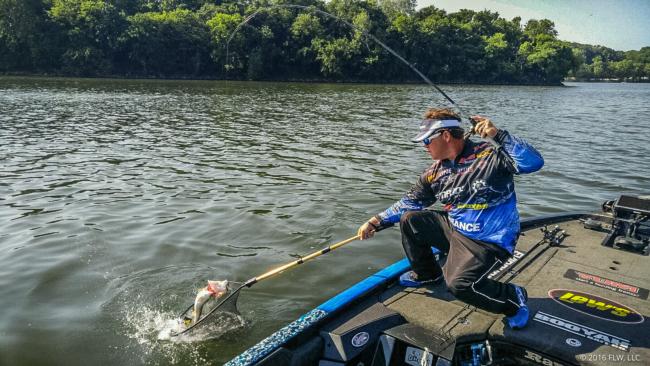 Barry Wilson has been throwing a ChatterBait during early fall for years on the lakes surrounding his hometown of Birmingham, Ala. The bass that inhabit these lakes relate almost entirely to gizzard shad throughout most of the year.

“The fish start coming out of their summertime patterns and start schooling up in wolf packs to start following the shad schools around,” says Wilson. “You can get into the mouths of coves that are going into the creeks and start finding those schools of shad.”

Wilson says that you don’t have to see the bass busting on the shad to catch them. He counts down a 1/2-ounce white ChatterBait paired with a white 4 1/2-inch Yum Pulse swimbait until it’s 8 to 10 feet deep, then starts winding. Quite often, the fish will bite on the fast fall, but he aims to pull the lure beneath the school of shad to trigger most of his bites.

“The action on that swimbait alone is what I think triggers them,” says Wilson. “It has great tail action, but it also rolls. So when it is rolling back and forth and left and right and the tail is kicking, and then you put that on the ChatterBait with the flash of the blade up front, it makes for a deadly combination.” 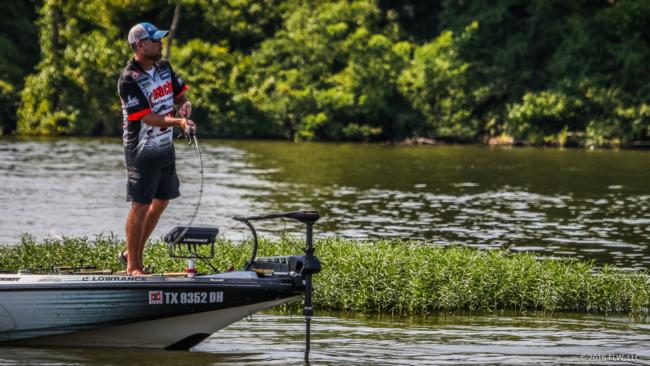 On big-bass reservoirs such as Sam Rayburn and Toledo Bend, Clark Reehm of Huntington, Texas, prefers to toss around a topwater toad during September. Hay grass, either standing or matted, is the main form of cover this time of year, and a Stanley Top Toad will get the job done.

“All of the water is starting to pull out of the bushes or trees, from when we had high water this year,” says Reehm. “This pulls all of the baitfish into that hay grass. There is not much other grass beyond this vegetation, so they are going to be offshore or in the hay grass.”

Reehm usually chooses the hay grass over the offshore bite because his understanding is that the fish holding in the hay grass are there to feed, using the grass for concealment while they forage. Using black, white or natural colors in the Top Toad, Reehm can catch fish from now until November by aggressively covering water.

“Obviously, early in the morning is better, but it is an all-day bite. It’s just a matter of putting it in front of them, and you will catch big ones doing it here,” he says. “I know last year in September there were three double-digit fish caught off a frog in one week, and I remember last September being the best frog bite I’ve ever seen because all of the fish were in the hay grass.” 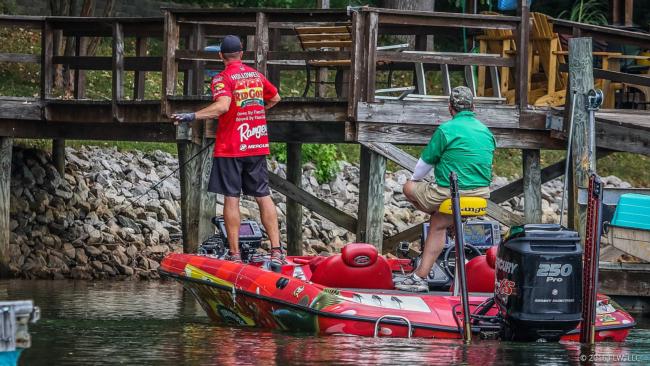 For Todd Hollowell of Fishers, Ind., the migration of the shad into the shallows means it’s time to bust out the spinnerbait and head to a boat dock in his neck of the woods. Although the classic lure is known to catch fish nearly all year long, he gravitates toward it this time of year in an attempt to separate himself from the others.

“A lot of times guys are used to flipping and pitching at boat docks with plastics, and I think by this time of year the fish have become conditioned to seeing a jig or a beaver-style bait,” says Hollowell. “It’s almost like you have to trigger them with something different. That’s why I like throwing a spinnerbait right now.”

Hollowell uses a 3/8-ounce Red Dirt Tunable Titanium Double Willow spinnerbait, primarily in shad patterns. The 3/8-ounce spinnerbait has the small profile that Hollowell likes. He works the bait with one of two techniques, depending on the weather.

“On your overcast days, they are not as tight to the docks, so I will just roll a spinnerbait around the dock,” says Hollowell. “When we get sun, I’ll get real tight with the way I fish the spinnerbait. A lot of the times, I’ll just try to reel it into a dock. I will even try to hit the dock with my blades to trigger a bite.” 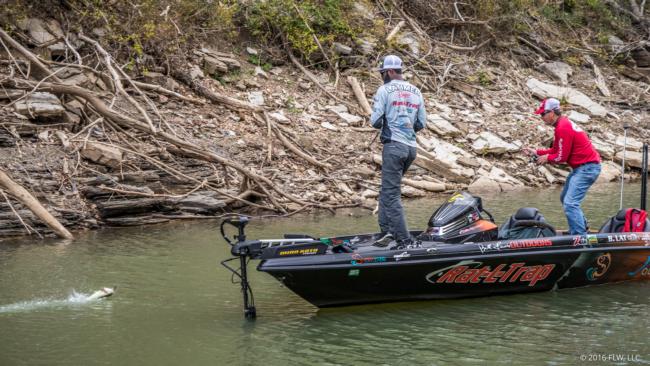 5. Creature Craws in the Carolinas

East Coast fishing for Brian Latimer of Belton, S.C., usually consists of finesse techniques tailored for offshore or main-lake fish, but the beginning of fall is a time for him to slip away and power fish a creek or two.

“Toward the fall, I really like to flip a lot. I live on Lake Hartwell, and when I tell people that I like to fish shallow in the creeks, using that Arkansas style this time of year, they kind of look at me weird,” says Latimer. “We don’t have much wood cover, so what happens is if you find any type of laydown, stump or inconsistency on the bank, there is almost always a fish on it this time of the year.”

Texas-rigged worms and creature baits have been his early fall favorites for a few seasons now, but more recently Latimer discovered the Z-Man Boar HogZ and has put the creature-type lure to work with a 9/16-ounce weight.

“As far as the profile goes, it is somewhat unique, but it is pretty consistent with a lot of the other creature lures out there,” says Latimer. “The real thing about the Z-Man plastic, though, is that I can catch eight or more fish on one bait, and it’s really the ease of not having to change baits all of the time that I like.”

Latimer says that the Canada craw color is great if you are looking to imitate bream, and he says to keep it simple in darker water by throwing black and blue. Colors aside, his retrieve is always somewhere between meticulous and efficient.

“With a heavier sinker, he’s going to hit it on that initial penetration,” says Latimer. “But occasionally you might hit the bottom and then make a few short, quick hops with the lure, then cast to the other side of the laydown or stump. And especially around this time of year when the fish aren’t that aggressive, I definitely will hit a piece of cover a few times before I move on.”