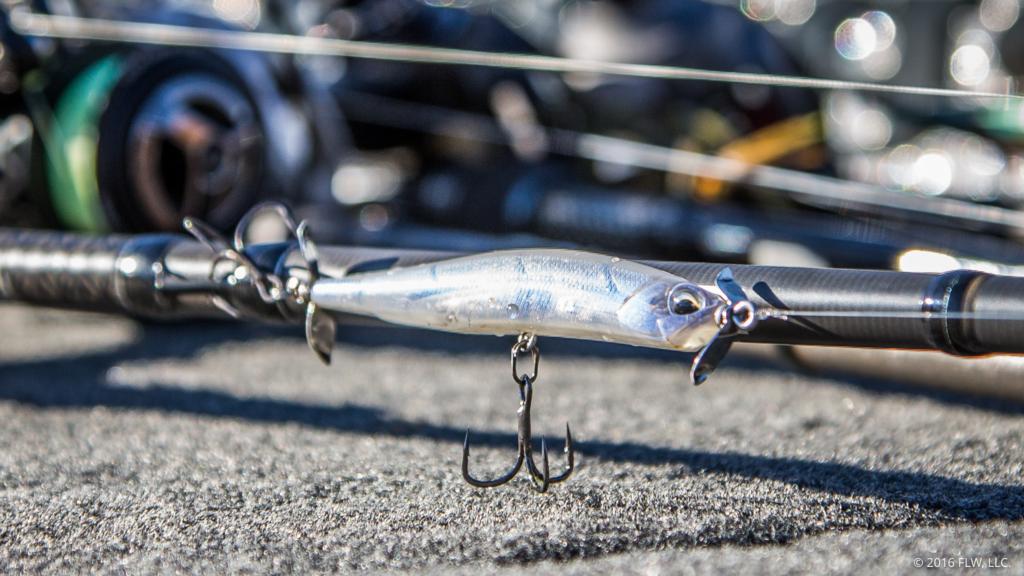 It’s no secret that finesse rigs such as a drop-shot or shaky head can produce good results on almost any body of water where bass swim. From professional anglers to weekend warriors, bass fisherman at nearly every level rely on finesse presentations from time to time. Many of those presentations involve slow bottom-fishing tactics.

However, one of the newer options for catching finicky fish is called spybaiting, which is done with a simple minnow-shaped hard bait with small in-line propellers that spin when the lure is retrieved. While it is a finesse approach, spybaiting is not your traditional cast-and-drag presentation. It is a great option for nearly any body of water in the country, and for anglers looking to change up their finesse approach.

Here are a few pointers to target your favorite species of bass with a spybait. 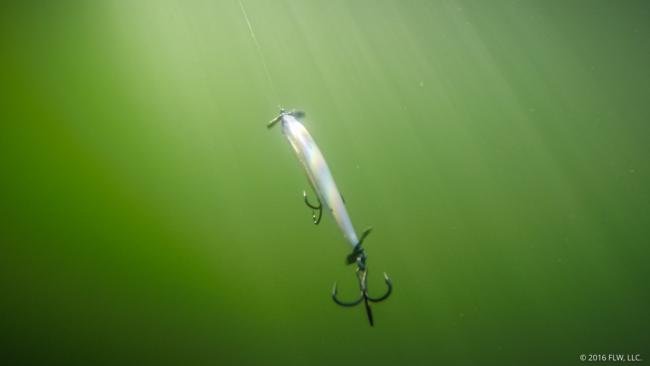 Spybaiting originated in Japan and is said to have developed about eight to nine years ago around the famous Lake Biwa. Since Biwa is known for ultra-clear water and heavily pressured fish, the idea to create a spybait came from necessity.

Simply, a spybait is a small, lipless jerkbait-type hard bait with two propellers – one attached to each end. A spybait slowly sinks, so it can be fished throughout the water column, and features a subtle rocking motion from side to side when retrieved. It’s the subtle shimmy at slow speeds that makes it irresistible to bass of all varieties.

A spybait might look like the type of lure you’d reel quickly or that needs some additional action, but the opposite is quite true. A slow retrieve on a long cast with light line is the best approach. Spinning rods spooled with straight fluorocarbon are the delivery method of choice for most pros who use this technique.

A spybait really does seem to produce in most any situation, as long as the water is relatively clear, though there are some times it really excels. For instance, it’s quite effective for targeting suspended bass, no matter the species of bass.

However, there are different approaches that can be taken based on the primary target species and the types of fisheries they inhabit. 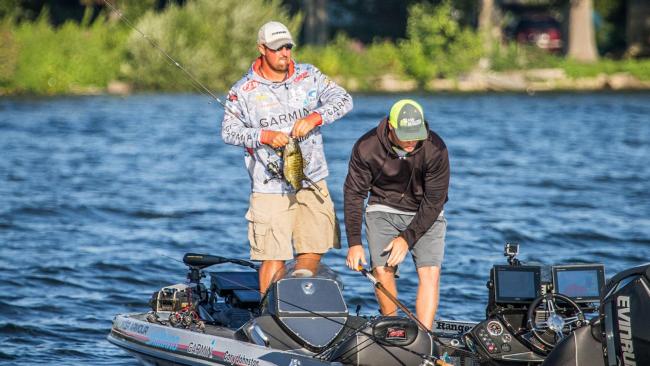 Smallmouth bass can be some of the pickiest fish in the bass fishing world. Their mood can seemingly change hourly, which is probably why finesse presentations are so perfect for catching them.

One guy who knows a thing or two about catching smallmouths is Walmart FLW Tour pro Cory Johnston, and he has quickly come to realize how productive a spybait can be.

“I really like it [the spybait] because you can really throw it any time of the year and catch fish,” says Johnston, who captured his third Strike King Angler of the Year title this season in the Northern Division of the Costa FLW Series. “It is a really good bait during cold-water periods.”

Though the spybait is a lure that can be cast and retrieved, Johnston doesn’t use it as a locator bait when he’s in search of hungry smallmouths.

“I generally like to fish it in an area that I already know smallmouths are in,” Johnston continues. “The nice thing about spybaits is that you can fish them all over the water column, so it works really good when you have a lot of baitfish around and the fish are suspending, or they are just chasing other baits [but not biting them]. You can usually get them to convert on a spybait.

“I like to fish it across shallow flats or deeper humps with rock. Though, I have caught them pretty good on Lake St. Clair over huge grass flats. Honestly, it works just about wherever there are fish. There have been a handful of occasions where I picked up a spybait and went behind other people and caught fish. That’s what I did when I won on Oneida this year.”

Johnson relies on either a Jackall iProp or Duo Realis Spinbait 80 for smalljaws and prefers natural color patterns rather than bright colors. He likes to use a G. Loomis 902 NRX spinning rod, a Shimano Sustain 2500 reel and 6-pound-test Berkley Trilene 100 Percent Fluorocarbon. 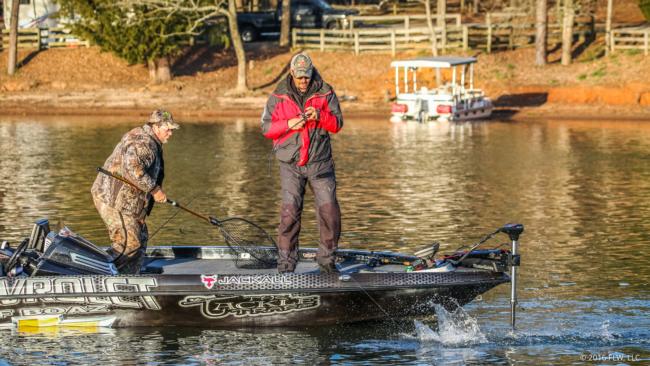 Much like their brown cousins, spotted bass also love eating a spybait. Tour pro Alex Davis enjoys chasing big spotted bass around Lewis Smith Lake in the fall and winter months and usually doesn’t leave home without having a spybait tied up.

“I love to throw a spybait in the fall when the baitfish are really small,” says Davis, who recently wrapped up his fourth season on the Walmart FLW Tour. “For spots, I like it when the water temperature is about 65 all the way down to 50 degrees. I feel like when it gets cooler than that the fish don’t really position right.

“A lot of the spots on Lewis Smith live on a certain point and come up schooling, and you can catch them with a normal topwater or fluke, but that spybait seems to catch fish when nothing else will work. It’s a good tool to have.”

Like Johnston, Davis doesn’t use a spybait as a search bait, but rather favors throwing the spybait in areas that he knows spots are calling home. The Alabama pro will check areas with a swimbait, soft-plastic stick bait or Flick Shake (weighted wacky rig), but still makes a point to work a spybait through an area before moving on.

“I like to throw it out and count it down to where I may think the fish are suspended, or when it is close to bottom if they are hanging around a brush pile,” Davis continues. “The key is to work it slow with a steady reel. I’ll stop it now and then because the action is built in, and when it falls it has a nice little shimmy. Once one eats it you just have to ease into it or you’ll pull the bait out of its mouth. It isn’t a big bite.

“I’d honestly throw it a lot more, but I just don’t have the patience to wait for it to sink down and work it back in slow. That’s why I use it once I’ve located fish. Even the most stubborn fish in the world can’t resist it.”

Davis also reaches for spinning gear when tossing a spybait. He opts for a medium-light Shimano Zodias rod, Shimano Stradic CI4 reel and 6-pound-test fluorocarbon to handle the finesse presentation. The Jackall iProp is his go-to spybait. 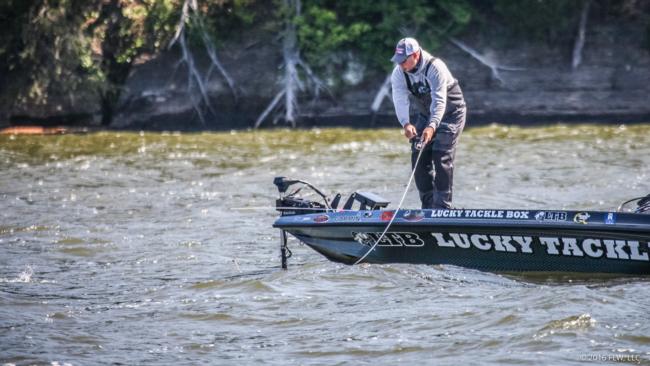 Tennessee River hammer Jason Lambert is a sure enough power fisherman. Still, Lambert finds value in having a spybait tied on when the water cools off.

“Growing up in Tennessee I learned from a young age about fishing a float-n-fly on bluffs and 45-degree banks in the fall and winter,” says Lambert. “When the spybait came out I didn’t pay much attention to it until I got a call from a buddy in Indiana who had been wearing out smallmouths on it, so I figured I’d give it a shot.

“I started throwing it around areas I’d throw the fly, and it didn’t take long to find out how much Tennessee River bass love it. It’s kind of a niche deal, but it works.”

Obviously, clear water is necessary for it to work, though that generally isn’t an issue in the South late in the year. Lambert notes that he likes to pick up a spybait when the water temp gets down around the low 50s and below and fish won’t chase a jerkbait.

“Working suspended fish is where it works the best, whether they are on docks or bluffs,” says Lambert. “You just have to figure out what depth they are sitting in and count the bait down and work it slow from there.

“I’d say the majority of the bites come on the fall. The key is to find a spybait that has a balanced, flat fall to it. A slow, subtle drop will help trigger bites. Of course, you catch some while reeling, but I think most of them hit it as it falls toward the school.”

Lambert reaches for a 7-foot, medium-action Duckett Micro Magic Pro spinning rod and 8-pound-test fluorocarbon for working picky largemouths. He has used several spybaits but says the Duo Realis Spinbait 80 is his favorite. 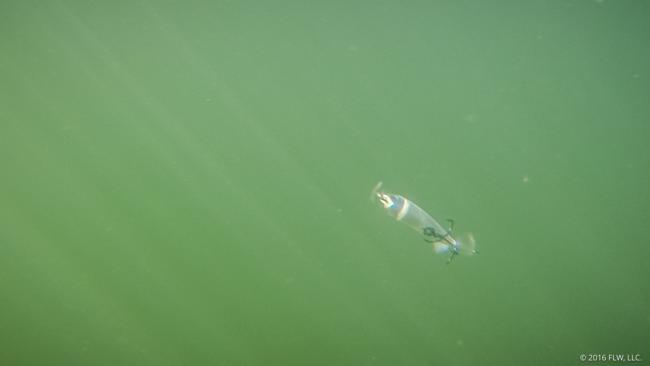 Though spybaiting is a niche technique, it’s still a heavily underutilized technique, and many anglers still haven’t experimented with it enough to realize its potential. That’s a good thing for anyone willing to give it a go as the water cools this season, because it just might be the ticket for getting stubborn suspended bass to commit when nothing else works.