Can anyone keep up with Thrift? 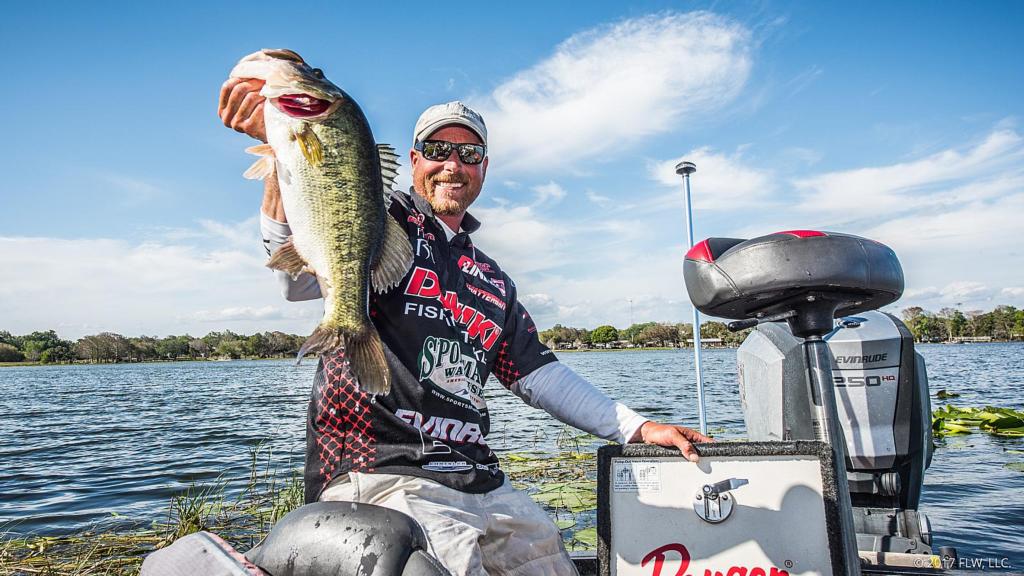 The 2017 FLW Tour season started off as “the year of Mark Rose” when he won back-to-back Tour events at Guntersville and Travis to kick things off.

Obviously, with maximum Angler of the Year points after two events, Rose led the standings going into tournament No. 3 at the Harris Chain. In a normal season, Rose would have had a comfortable cushion of 15 or 20 points over second place. Instead, as a result of a remarkably anomalous start to the season, he only led by two points over North Carolina pro Bryan Thrift, who finished runner-up to Rose at each of the first two tournaments.

Thrift followed up with a fifth-place finish at Harris Chain to take over the AOY lead. A 65th-place finish for Rose ended his chances for a season sweep (it was a very slim chance, but still …) and cost Rose a few spots in the standings.

Now, the motto for the 2017 is “the year everyone tries to catch Bryan Thrift.”

To those in pursuit, good luck. Thrift has the two runners-up in Tour events and a runner-up finish at the Lake Seminole Costa FLW Series event already this year. He has an active streak of five consecutive top-10 finishes in Tour events – an FLW record. Thrift is possibly one of the five best bass anglers of all time, and when he’s fishing better than “normal Bryan Thrift,” as he is this season, it’s not likely he’s going to slip.

Here’s how the AOY top 10 breaks down. 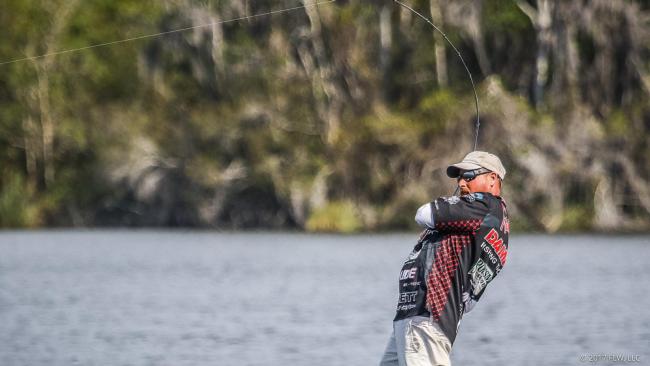 Thrift’s cushion is already 43 points. That gives him enough room to slip a little and still maintain his lead. If everyone else in the top 10 has at least a minor hiccup and finishes out of the money a time or two in the next four events, which is probable, Thrift has a major opportunity to earn his second career AOY trophy.

While it’s not likely that he’ll make the top 10 in every event (though definitely possible), Thrift has always been pretty bombproof throughout his career. He’s only finished below 100th four times in Tour events and has only missed a check 10 times. That’s over the course of 10 full Tour seasons, plus some Opens, an Invitational and the three events held this year.

There’s not a tournament site on the schedule where Thrift is out of contention. He’s strong at Beaver, where he’s won before, and that could set him up well for Cumberland. Though he has a spotty history on the Potomac (including a top 10) and little history at La Crosse, it’s hard to say he’s likely to do poorly in any event. 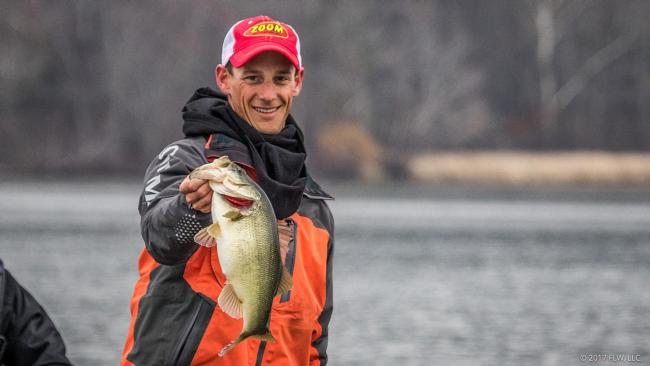 Looking up at Thrift is South Carolina pro Brandon Cobb with 552 points. Cobb has already earned $40,000 in 2017 with finishes of sixth, 33rd and 12th, and whether or not he catches the leader, Cobb is in a great spot to qualify for the Forrest Wood Cup on Lake Murray in his home state.

Cobb has a few hurdles in front of him if he wants to stay on this pace. He’s had good success at Beaver Lake the last two years with top-20 finishes but posted a mediocre 71st-place mark at the Potomac two seasons ago. He’s never fished a Tour event at Lake Cumberland or in La Crosse. Lucky for him, there should be a good shallow bite at both of those stops.

He’s a shallow-water specialist, so if he can get on a bank-running pattern, Cobb has a shot to at least keep Thrift honest. 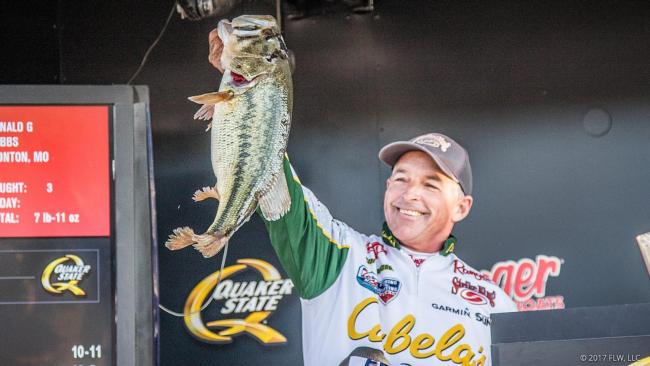 Coming off a top five at home in Texas and an 11th-place finish in Florida, three-time AOY Clark Wendlandt is back where he belongs: in contention for the season-long point title.

If Thrift slips up somewhere, Wendlandt quickly will become the favorite to snatch away his lead. Lake Cumberland feels a bit like Lake Travis, with its deep, clear waters and plenty of newly flooded shallow cover in the wake of an extended drawdown period. He’ll feel at home there. Wendlandt was once known as Mr. Beaver Lake for his success at the Arkansas fishery. Expect him to have a strong finish there, too. He won the last time the Tour visited the Potomac, which suggests he understands river fisheries and shallow vegetation, and that sets up well for him at La Crosse.

Yes, the remainder of the 2017 Tour season falls right into Wendlandt’s wheelhouse. 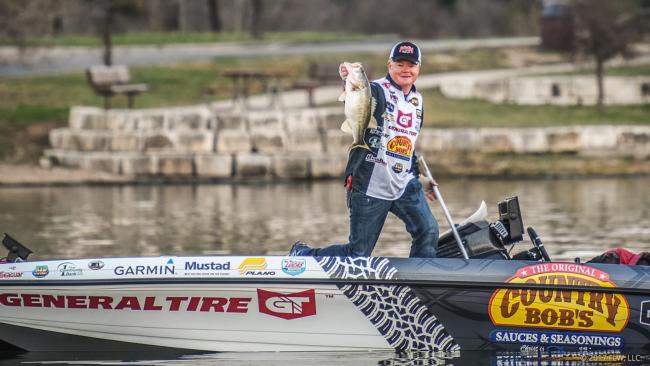 Mark Rose is in a similar position as Wendlandt in that each of the four remaining events sets up well for his skills and experience. He’s strong at Beaver and should be at Cumberland, too, especially if there’s still some offshore prespawn action. There should be, given the recent cold snap in the Mid-South that at least slowed down what has been an early prespawn transition in the region. Rose grew up on the Mississippi – not in the Upper Midwest, but still on the river. He ought to do fine in La Crosse. He also has finished in the top 30 at the last two Potomac Tour events.

Rose’s biggest challenge will be keeping his foot on the gas in the wake of two Tour victories. He’ll need to stay aggressive to stay in the AOY hunt, because if he coasts in, knowing that he’s in prime position to make the Cup as long as he avoids cratering at any tournament, then the others could pull away.

Likely, he’ll score another top 20 or two. He’s fishing way too well to fall out of contention entirely. And don’t be surprised if he rebounds with a top 10 at Cumberland and sets up a season-long duel with Thrift for the AOY title. 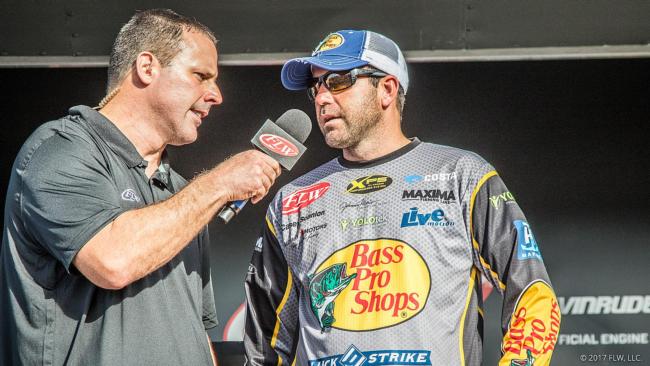 This former B.A.S.S. Elite Series pro started his Tour career off right with a pair of top 20s in the first three events to get into AOY contention. He has a lot of ground to make up and should be able to stay strong at the next two events. Scanlon’s hometown of Lenexa, Kan., is just outside of Kansas City and a short drive from several famous Ozark lakes. This is pure speculation, but given where he lives, he ought to feel at home on nearby Beaver Lake and at Cumberland, which has some similarities to Ozark reservoirs.

In B.A.S.S. events last season he put up a decent 46th-place finish at La Crosse and finished 86th on the Potomac, though tidal fisheries appear to have been a thorn in his side throughout his pro career.

There’s a crew of headhunters in the sixth through 10th spots in the standings, and any one of them could wind up at the top when the Tour wraps up at the Potomac this summer.

Reehm, in 10th, is 90 points back of Thrift. That’s a large deficit. But consider that Rose was two points up on Thrift before Harris and wound up 57 points behind him afterward. Big swings are certainly possible. If Thrift tanks and ends up with a triple-digit placement, any of these guys could make a big move up the leaderboard.

Winning AOY is a game of persistence and consistency. Most years, you have to average a top-20 finish. None of the anglers from sixth through 10th is there yet, but a couple of top 10s could quickly change the picture.

Only one angler can win AOY, but at least 34 additional pros will qualify for the Forrest Wood Cup, and with double-qualifications (there should be a few this year) the cutoff usually gets extended down to about 40th place in the standings.

Larry Nixon, in 28th, is looking good to earn his 16th Cup invitation and a shot at the major bass fishing championship that has eluded him for so long.

Michael Wooley wants to make it to Lake Murray for the Cup. He finished eighth there in 2014. Wooley is in 34th place.

Matt Arey and Chris Johnston, in 43rd and 44th, respectively, can move into Cup range with good finishes at the next few events.

Scott Martin needs to improve to avoid missing the Cup for the first time since 2005. He’s in 51st. Don’t doubt that he’ll make it, though. Martin will find his stride when the Tour picks up again at the end of March.

Todd Auten, in 70th, will be a Cup favorite in his home state if he can climb out of the middle ranks.

In 76th is Cody Meyer, who’s never missed the Cup in his Tour career. Back-to-back finishes of 119th and 90th at the last two events really set him back.

Check out the full standings through three events here. The top 35 in the FLW Tour standings qualify for the Forrest Wood Cup, with additional invitations given when anglers above the cutoff double-qualify through other FLW circuits. The Angler of the Year wins a six-figure payday and a spot at both the 2017 and 2018 Forrest Wood Cups.