Carolina Rig Tips from the Pros 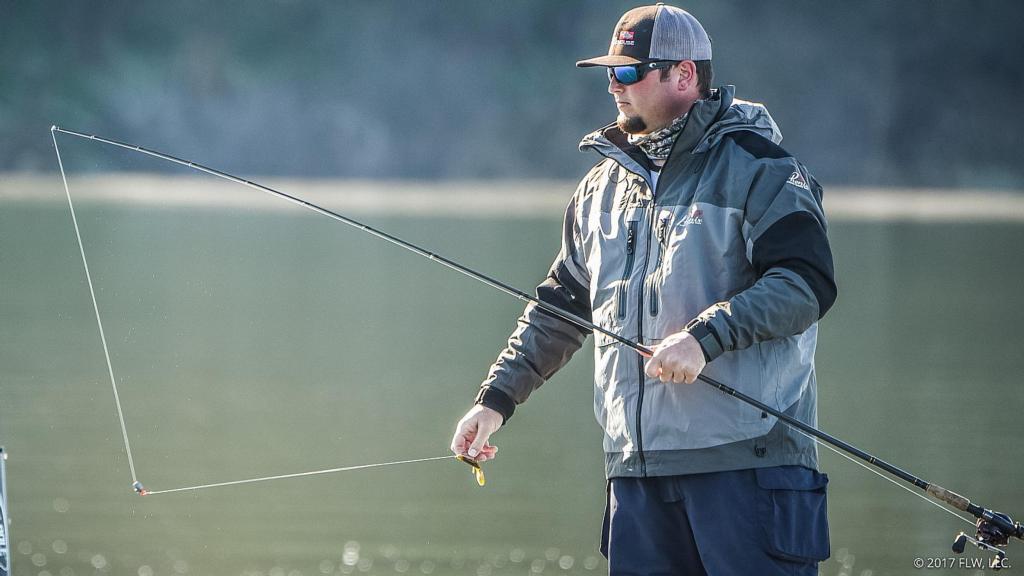 The Carolina rig doesn’t get a whole lot of press. Maybe that’s because it’s many anglers’ least favorite thing to throw. Yet down at Lake Travis, not only did the C-rig make headlines, but the venerable rig nearly won the tournament, putting both Stephen Patek and Clark Wendlandt in the top 10. In the process, it proved again that the Carolina rig has a wider application than as a tool for tackling the summer doldrums, and it ought to at least make you think about slinging one if you haven’t lately.

The mechanics of the Carolina rig make it possible to present a bait in fairly deep water with very little weight directly affecting it. That’s done by keeping the weight well away from the actual bait. Typically, a 1/2- to 1-ounce bullet weight is threaded onto the fluorocarbon main line, followed by a bead or a metal clacker or two. The main line is then tied to a swivel, and that’s tipped with a 1- to 3-foot-long leader. To the leader is tied a soft plastic and a matching hook.

You can put about any bait on a Carolina rig, from a Yamamoto Senko to a Zoom Fluke, but the most popular are probably Zoom Brush Hogs, Speed Craws and other critter-type baits. That said, there’s a long tradition of making a Carolina rig a truly finesse rig and dragging around a ringworm or French fry for picky eaters. 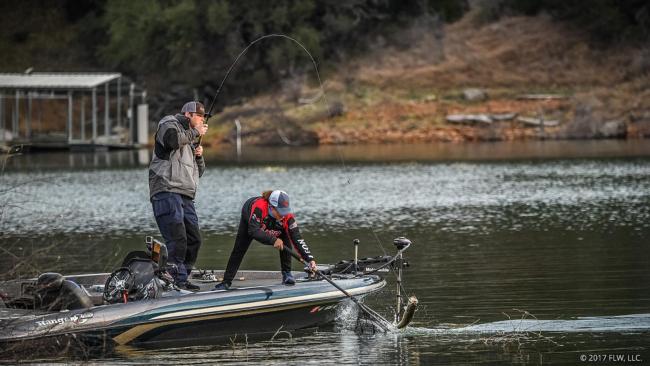 Born and raised near San Diego, Stephen Patek says that a Carolina rig was a natural choice for him at Travis. Back home in Cali, Patek says that C-rig is known as a “bubba rig,” because of the big lead weights that were standard back in the day, and he and his father, Christopher Patek, have caught countless deep bass on it.

At Travis, Patek fished with about a 3-foot leader, a 1-ounce weight and a Zoom Speed Craw. Patek actually likes getting hung with a C-rig, which is part of why he almost always throws a 1-ounce weight. He believes that popping the weight out of a snag on the bottom adds some extra action that can be essential. Nonetheless, his usual offering is pretty finesse, with a long leader deadening the action and the Speed Craw drifting along like a protein-packed morsel for a hungry bass.

For Patek, the Carolina rig fits the bill when the bass are deep, in anywhere from 15 to 40 feet of water. His hot spot on Travis was a bare hump surrounded by really thick bushes and trees. It topped out in about 18 feet of water and was hard and rocky on top. After finding it, Patek says the depth told him to pick up a Carolina rig. It wasn’t any special seasonal or lake consideration that led him to make the call. 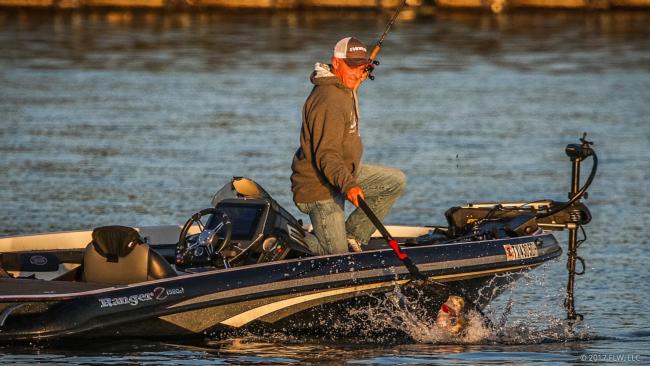 Clark Wendlandt – Necessity is the mother of invention

For Clark Wendlandt, the Carolina rig was a necessity at Travis, not a go-to. In the end, it did a lot, and accounted for his two biggest fish on the third day.

“I caught them the first two days predominantly on a jig,” says the veteran Texan. “I had a Carolina rig rigged, but it wasn’t something I was thinking I had to throw. When it got tougher on the third day on some of the places I was fishing that was the bait that came to mind. The way the tournament played out it was a deep-structure tournament, and that was the bait I got the most bites on.”

Usually Wendlandt likes to use a Strike King Rage Hawg on his rig, but on the final day at Travis he could get bit best with a 7 1/2-inch Strike King Finesse Worm. Because of the brush at Travis, Wendlandt went with a 1/2-ounce weight, though a 3/4-ounce weight is his usual go-to. He also made another rigging modification that he plans to carry forward. Instead of using a swivel to connect a leader, Wendlandt held his weight in place up the main line with bobber stoppers.

“There was so much brush in Travis that you would hang it a lot,” says Wendlandt. “It was so easy for your hook to get hung on those small branches, and a lot of the time the only way to get it out was to go over and pull. If you use a bobber stopper and just cinch your weight up you’ve only got to tie one knot. I’ll probably never Carolina rig with a swivel again. It’s just way easier this way.”

Recognizing the worth of the Carolina rig’s unique presentation, Wendlandt doesn’t pigeonhole it into any one situation.

“To me, I don’t equate a Carolina rig with the summer,” says the three-time Angler of the Year. “It is a deep bait, but I’ve caught them really good on inside grass lines on Texas lakes, too. It’s just a more finessy way to get a soft plastic into the area where those fish want to be. Generally, you can get more bites on a Carolina rig than you can on a Texas rig.” 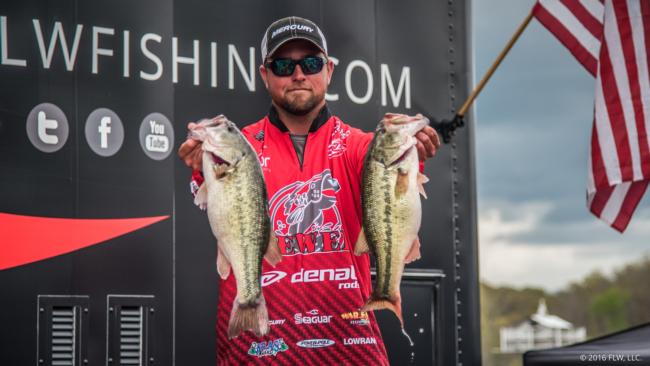 Joey Cifuentes didn’t do great at Travis, and he hardly threw a Carolina rig there, but he nevertheless knows the value of the ol’ “ball and chain.”

“I throw it in high-pressure situations, and prespawn it’s usually really good,” says the rookie pro. “It’s good during the spawn, too, and in the Ozark lakes in the heat of the summertime it catches a lot of fish. To be honest with you, you can throw it year round.”

Cifuentes is particularly likely to throw Carolina rigs in the spring, when there might be fish on beds but there are definitely bass moving up. In that case, he likes to target transition areas such as points or deep spots near spawning flats. He also targets the flats and the edges of the flats, especially if they have some kind of cover such as vegetation or stumps on them. For the Arkansas pro, it’s a good way to tempt a bass that might be a little finicky and shy of a crankbait or a football jig.

Cifuentes relies on Brush Hogs and Speed Craws like everyone else. He mostly sticks with a 3/4-ounce weight, but will go down to 5/8 ounce for shallower water. His leader length is where the real tweaking happens.

“If I’m in super-clear water I’ll use a 3-foot leader, but on the Tennessee River or Toledo Bend I’ll shorten it up,” says Cifuentes. “I don’t think having a longer leader is that much more beneficial on those lakes, and it’s easier to cast and you can cover more water with one about a foot or two long.”

On the retrieve, Cifuentes doesn’t just do a straight-up drag. He adjusts a little depending on the situation.

“If I know the fish are spawning and I hit a stump with it I would definitely let it sit there for a little bit,” he says. “You’re right there around where a bed could possibly be. If I’m fishing deep then I’ll just pop it off and then let it pause a bit.”

Most Carolina-rigging gear is pretty heavy duty. A high-speed reel and heavy fluorocarbon are nearly mandatory. Cifuentes uses a 7-foot, 4-inch, heavy-action Denali Kovert Lite as his rod of choice, and those specs are pretty standard. Some folks will even use rods up to 7-9 in an effort to better cast a big weight with a long leader and to control a lot of line in deep water.

There’s been a bunch of money made on lighter, more finesse Carolina rigs as well, a lot of it by Peter Thliveros. That tactic is really a different ballgame, but the premise of presenting a soft plastic in a subtle manner with a free-floating action is the same. If you’re looking for something new to do with a Carolina rig, Thliveros’ lightweight “Petey rig” is a good example to keep in mind. You can learn about it in this Beyond the Basics video. Even if going super light isn’t your style, a Carolina rig with a 1/2- or 3/8-ounce weight can still be an effective tool.

Finally, you might want to consider including bobber stops in your rig. A stopper above the weight keeps the weight from sliding up the line and can make casting easier. Adding a stopper between the weight and the swivel can help protect the knot. Neither is a necessity, but it never hurts to innovate a little, even with the old-school ball and chain.